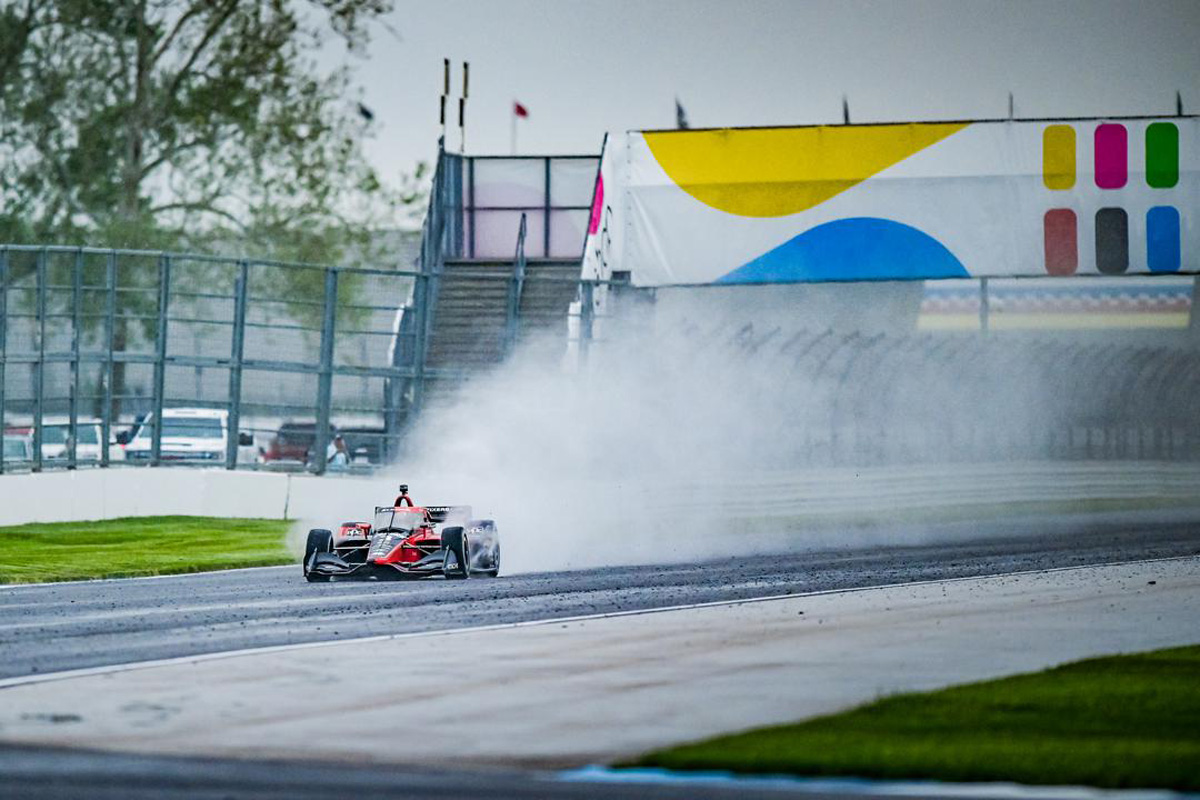 Well that was some sort of day at the races.

Let me tell you about it.

Here’s my snapshot of Saturday…

Race was brought forward to avoid the rain, then delayed due to lightning and much heavier rain.

So that meant my first taste of an IndyCar in the wet was going to be in a race! No biggie!

Waiting around did nothing for my nerves…

Started 11th and ran in the mid-pack, then ran up the front, pitted a few times, then found ourselves in the lead.

We gambled on the wrong tyres at the end – which left us on slicks when the rain returned so we were a sitting duck.

Could have won the race, could have regained the championship lead, but then spun under the Safety Car.

Then spun again under green.

Had to pit again – and finished with our tail between our legs, a lap down, back in 20th.

As a day – it was completely frantic and taxing and draining – both emotionally and physically but most importantly, mentally… I was cooked by the end!

Let me tell you, a beer never tasted so good as it did back in the bus on Saturday night.

But it’s everything I love about IndyCar racing.

I’ve been telling you a bit now – that it’s the MOST competitive motorsport series in the world right now, and you just have to be at the top of your game.

And if you’re not – it has the ability to punch you right in the guts.

We should have been up the front – instead we started on row six.

Again – so competitive. And so brutal if you’re a fraction off.

Which is how race day panned out.

We were perfect throughout and I thought we were on for a podium at the very least – but looking back we really could have won the thing.

Instead we rolled the dice as a team and picked the wrong tyre.

It was a team call – we just made the wrong choice as a collective, and we were caught out at the end.

It’s one that got away – but I’m still optimistic of where we’re at.

Our pace is awesome and we’re all feeling great as a team.

The stops were brilliant – we jumped Colton Herta under caution which had us in the box seat to win the thing… but then the heavens opened.

And despite everything that happened – we remain up there in the championship, which is a bit of a miracle really, but we’ll take it.

The good news – my team-mate Will Power has leapfrogged us and Alex Palou to be the new series leader, so it’s a great vibe at Penske ahead of the biggest few weeks of the year.

Will is such a great example for me to follow – his consistency is something else, and he’s now grabbed the title lead with finishes inside the top four at all five races so far without winning.

Now all eyes turn to the oval here at the Brickyard with opening practice kicking off tomorrow for the Indianapolis 500.

The vibe at the speedway and in the town is unlike anything I’ve ever seen.

I’m so excited for what’s to come – and I’m enjoying sharing the experience with you all.

The weekend didn’t pan out perfectly for us obviously, but hopefully there’s brighter opportunities ahead.

Thanks for the support,