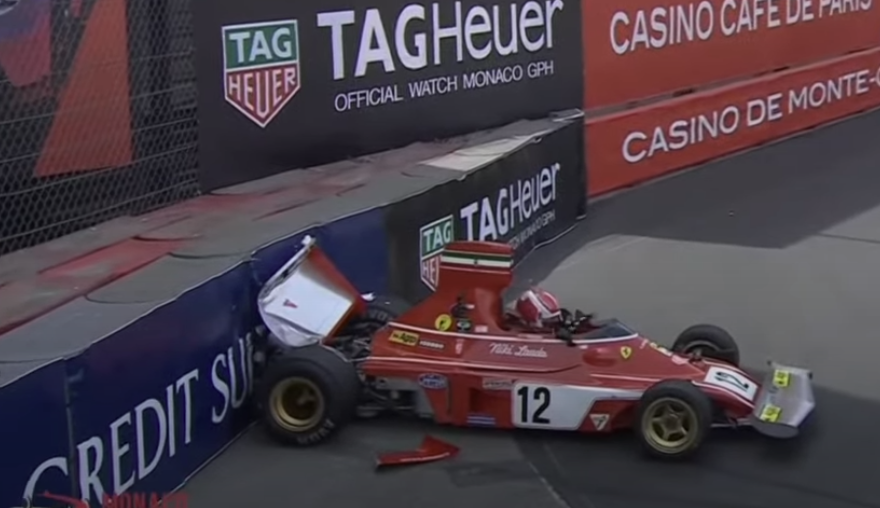 Charles Leclerc has crashed a Formula 1 Ferrari once raced by Niki Lauda, at the Monaco Historic GP.

The current world championship leader took to the wheel of the Ferrari 312 B3-74 as part of the iconic event.

However, brake issues saw the Monegasque driver lose control at the Rascasse, backing into the barrier and damaging the rear wing.

“Charles was having a great time in the #MonacoHistorique show run, really enjoying driving Niki Lauda’s 312 B3-74, until a brake problem ended the run on his last lap,” a statement on Ferrari’s Twitter advised.

The 1974 Ferrari harks from Lauda’s first season with the Scuderia after his switch from BRM.

In the hands of the Austrian, the 312 B3-74 won twice, in Spain and The Netherlands, as he finished fourth in the drivers’ championship.

Team-mate Clay Regazzoni was second in the title race to Emerson Fittipaldi, taking victory at the German Grand Prix, as Ferrari finished second to McLaren in the manufacturer standings.

The car used that season was a variant of the 312 B2 in 1970 with the model only retired when the 312T came onstream for Lauda’s successful 1975 championship campaign.

Designed by Mauro Foghiere, it sported an aluminium monocoque with a 3.0-litre Ferrari flat-12 engine.

Having first run in 1997, the Monaco Historic GP traditionally takes place two weeks prior to the Formula 1 Monaco Grand Prix.

It features racing for cars from the pre-war era up to the mid-1980s.

During the lead-up to the Miami Grand Prix, the 24-year-old piloted a 312 T4 from 1979 once driven by Gilles Villeneuve.

The Canadian, who remains a Ferrari favourite, lost his life at the 1982 Belgian Grand Prix, the Scuderia marking the 40th anniversary of his death.

The Monaco Grand Prix runs from May 27-29, though F1 will first head to Spanish Grand Prix this weekend, opening practice for which begins at 22:00 AEST on Friday.