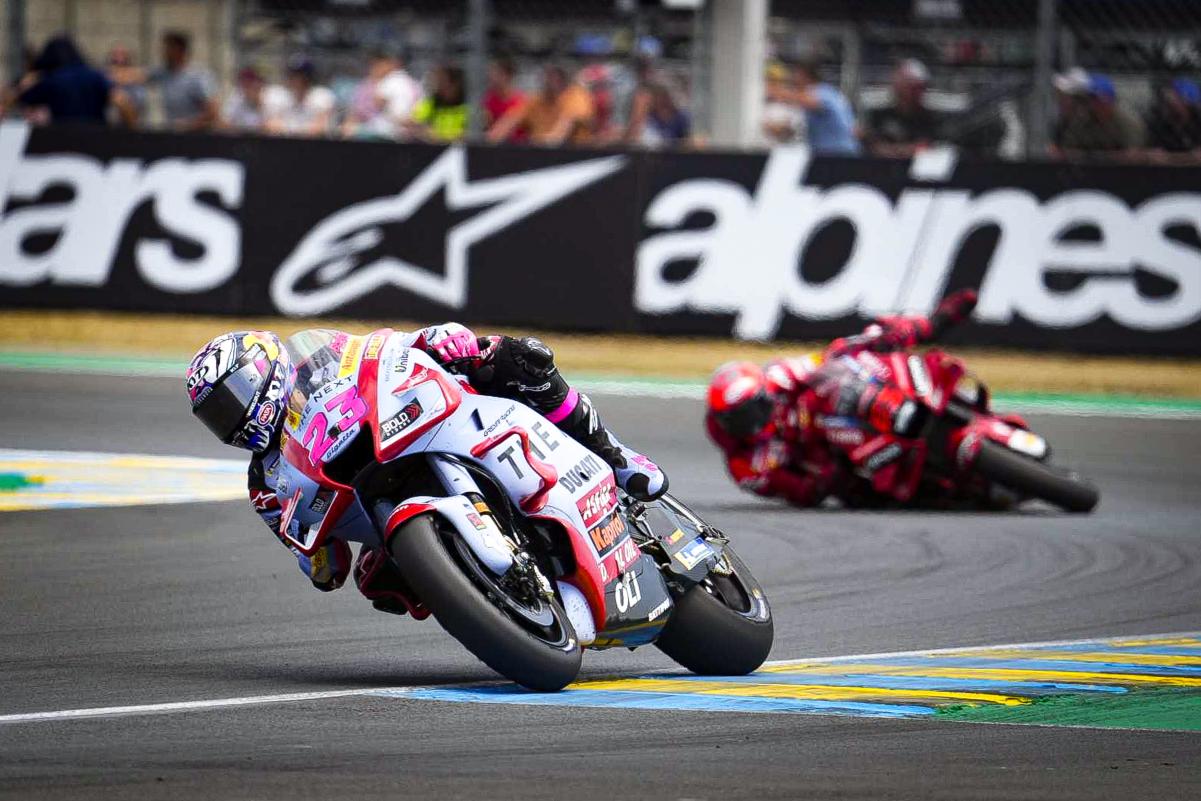 Miller took the early lead with the holeshot from the middle of the front row at Le Mans, while Bastianini braked deep when they arrived at the Turn 3/Turn 4 chicane to nab second from Bagnaia.

The Gresini Ducati rider was quickly back to fourth, however, when he apparently went wide at Garage Vert and left the door open for Bagnaia and Suzuki Ecstar’s Alex Rins.

The latter was on the deck at the start of Lap 3 when he ran off at the Turn 1/Turn 2 sweeper and lost the rear as he re-entered the race track.

Miller led until Lap 4, when he missed the apex at La Musee and let Bagnaia through, then came under pressure from Bastianini.

As Bagnaia crept away from his Ducati Lenovo team-mate, Bastianini went down the inside of the Queenslander and into second position at Garage Vert on Lap 12.

‘Bestia’ gradually closed the gap to Bagnaia before inheriting the lead on what was a disastrous Lap 21 for the works rider.

Bagnaia had already run wide and lost first position at Garage Vert before folding the front and crashing altogether five corners later at the Raccordement complex.

By then, Miller had drifted more than two seconds back from #23, but was looking safe in second position given he had shaken off recent pressure from Aprilia Racing’s Aleix Espargaro.

Bagnaia was briefly more than three seconds up before taking the chequered flag 2.718s ahead of Miller and another 1.464s clear of Espargaro after 27 laps.

The Aprilia rider had inherited third position thanks to three mistakes in front of him, but was still made to earn the podium when he had to fend off a challenge from Fabio Quartararo.

The Monster Energy Yamaha rider was only eighth at the end of the standing lap after a hair-raising near-collision with Repsol Honda’s Marc Marquez but soon found his way past his fellow MotoGP champion.

In the championship, Quartararo still leads, but his margin has been snipped to four points, with Espargaro second and Bastianini only another four points back in third, while Miller is fifth and Bagnaia has dropped to seventh.

Rins remounted after his wild Lap 3 spill but ultimately retired, and it became a double DNF for Suzuki when Joan Mir crashed out of fourth at Raccordement on Lap 15.

Remy Gardner’s race lasted just over three laps before he had a spill, Tech3 KTM team-mate Raul Fernandez later dropped his RC16 also, and then Red Bull KTM’s Miguel Oliveira went down at Turn 3 while running ninth on Lap 25.

The other rider of the seven who failed to make the chequered flag was Pramac Ducati’s Jorge Martin, who crashed on Lap 17.