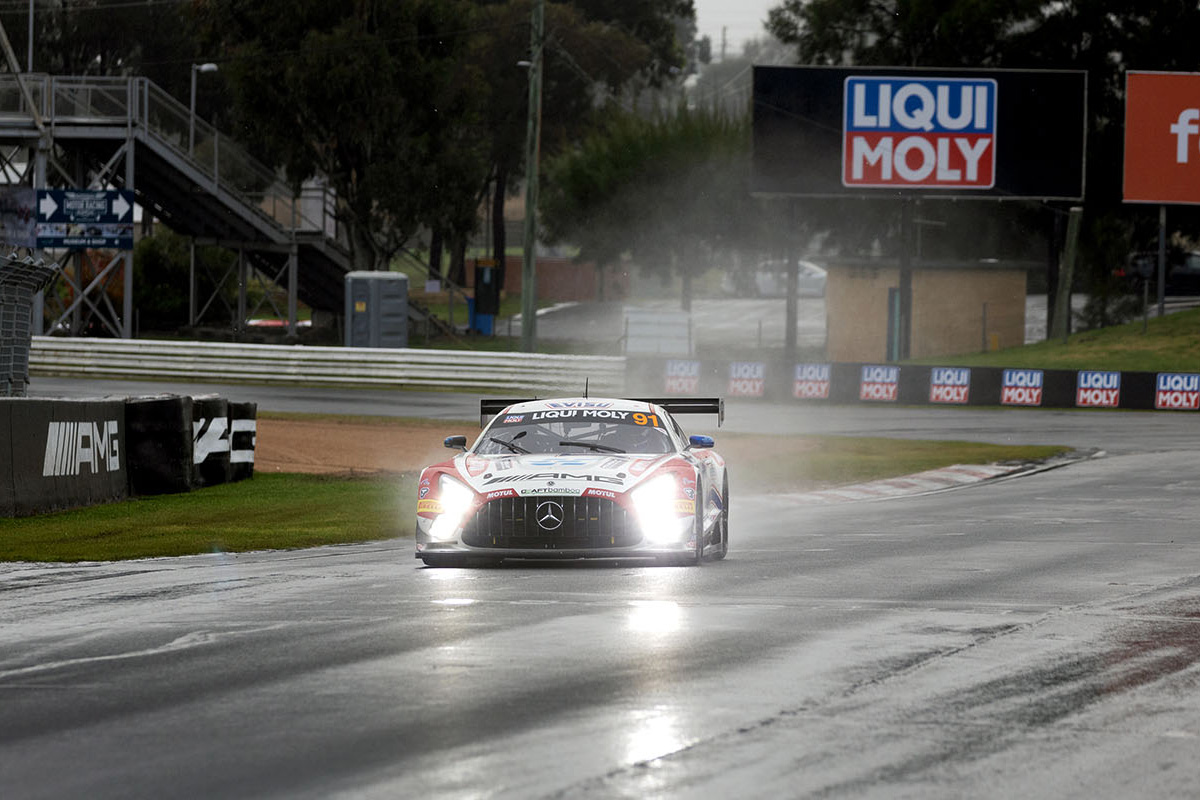 The #91 Mercedes-AMG GT3 has a 42-second lead over the next-best car after an opening stanza that has seen rain, fog, incidents and six Safety Car interventions.

Pole-sitters, Chaz Mostert, Fraser Ross and Liam Talbot (#65 Audi), struck trouble during the sixth hour when Talbot momentarily ground to a halt, before the car was wheeled into the garage.

Ross has rejoined the track in 14th but is 10 laps down after the mechanical gremlins.

Since Race Control let the race get underway in the dark, foggy conditions of the early morning a number of intriguing strategies have emerged.

The outlier amongst all of them was the race-leading Craft-Bamboo Mercedes that completed 12 pit stops before the four-hour mark, nine of them being the required nine Compulsory Pit Stops (CPS).

That means the Maro Engel, Daniel Juncadella and Kevin Tse entry will be able to run to the flag by only stopping for as long as the necessary service takes, as opposed to the minimum 120-second transit time for a CPS.

Am driver Tse led the way at the wheel of the sole international car at the end of six hours of running at Mount Panorama, but is being quickly caught by Jules Gounon (#75 Mercedes).

Following the Safety Car start, Zane Morse brought out its second appearance after hitting the wall at The Grate in the #52 MARC II V8 towards the end of the first hour.

That saw a number of teams stop and put their Bronze-rated drivers in the car despite the poor visibility making things tricky.

Amongst a pack of Bronze drivers, Broc Feeney made his way to the lead in the #888 Mercedes after passing Liam Talbot, who appeared to be struggling and dropped to ninth.

As the morning darkness faded to light, Brenton Grove beached the #4 Porsche in the gravel at Turn 1 to bring our the third Safety Car 90 minutes into the race.

It was under this full-course yellow period that the rain arrived and Jack Perkins crashed the #19 Mercedes at The Chase in the slippery conditions.

Team BRM vaulted to the front after putting wet weather tyres on the #17 Audi at an opportune moment, with Nick Percat leading through a lengthy fourth Safety Car for a stopped KTM.

Their lead lasted not much longer though, as the car was brought into the garage to fix an issue with the rear rain light.

A further two Safety Car periods were needed as the fog returned, and by the end of the sixth yellow intervention the Craft-Bamboo Mercedes, which missed qualifying yesterday due to an engine change, had cycled to the front.

While the track conditions remained wet, the Mercedes pair of Juncadella and Shane van Gisbergen had a healthy lead over the rest of the pack.

Late in the fifth hour Triple Eight were the first of the front-runners to pull the trigger and switch to slicks on what was now a drying circuit.

Van Gisbergen handed over to Feeney at the same time before the Supercars rookie stopped again a short time later to make way for Prince Jefri Ibrahim, who stayed out of the car in the tricky conditions.

Luca Stolz (#75 SunEnergy1 Racing) did pass Tse in the Craft-Bamboo Mercedes before diving in for a pit stop near the end of the sixth hour.

Gounon, who took over from Stolz runs second from Yasser Shahin in the #777 Audi, who inherited third just moments ago as Ibrahim pitted in the #888.

Tony Bates is now fourth at the wheel of the #24 Audi he shares with David Reynolds and Cameron Waters, with van Gisbergen fifth.