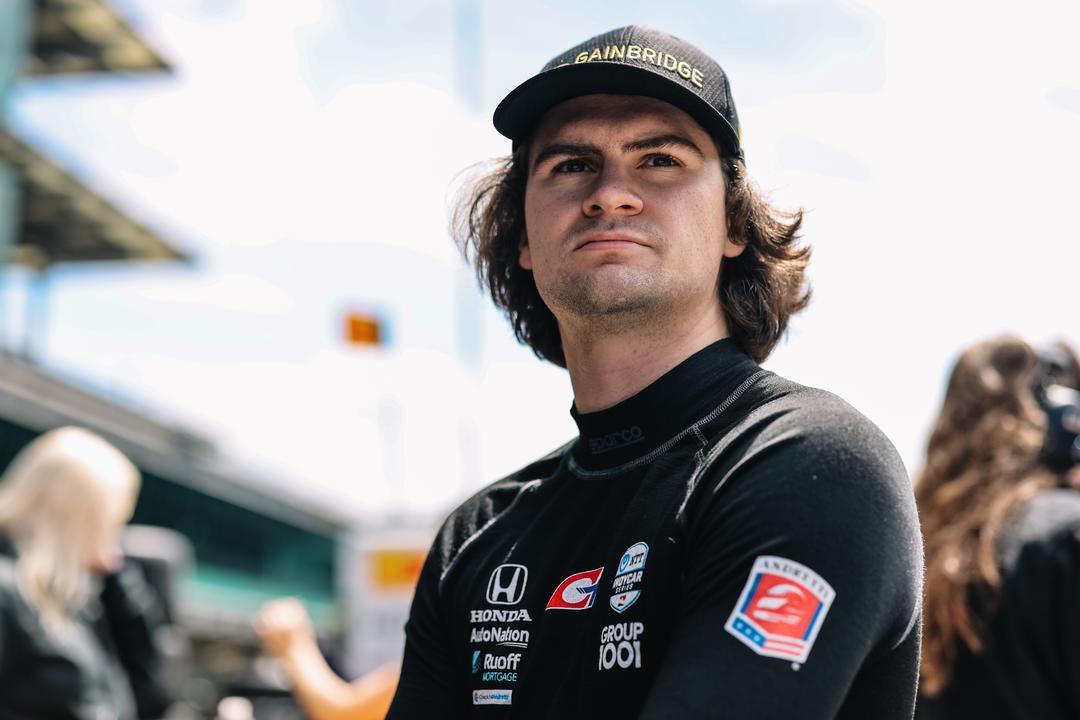 Colton Herta has won an astonishingly chaotic Grand Prix of Indianapolis, after Scott McLaughlin spun out of a late lead while under Caution.

Herta was running in first when the race finished under its eighth Caution period on a time-certain Lap 75, having held that position for the majority of the contest, officially or at least effectively.

The Andretti Autosport w/ Curb-Agajanian driver was more than five seconds to the good when that final yellow flag period was called, a development which locked Meyer Shank Racing’s Simon Pagenaud into second and Team Penske’s Will Power into third.

It is the latter that now leads the IndyCar Series, with a 16-point margin over each of McLaughlin and Alex Palou (Chip Ganassi Racing), despite those two finishing 18th and 20th respectively.

Earlier rain had led to the declaration of a wet start, and then a tricky period navigating the transition to slicks given the track had already dried significantly by the time the field took the green.

However, that was just the beginning of the mayhem, most of which was caused by ever-changing weather.

While the complexion of the race changed countless times, the sixth Caution period was arguably pivotal in the final outcome.

Herta was leading from McLaughlin at the time that pit lane opened after Jimmie Johnson (Chip Ganassi Racing) had spun onto the grass and got stuck there.

Some crews, including that of the front-running #26 Honda, had originally laid wets out when that yellow was called, but everyone was ultimately put onto slicks as the rainfall continued to fluctuate.

It seemed like a crucial moment when McLaughlin managed to just jump Herta as he drove out of his box, but then the latter made another stop under the Caution to take wets after all.

Joining him in doing so was everyone bar McLaughlin, Pato O’Ward (McLaren SP), and Romain Grosjean (Andretti Autosport), and hence those three filled the podium positions with less than 20 laps to go at the most.

However, as it looked like the restart was about to come, McLaughlin threw away first position when he spun at Turn 10, and was forced to file into fifth spot.

In terms of track position, it was new race leader O’Ward from a lapped Johnson, with Herta in second from Pagenaud, Power, and McLaughlin when they did finally go back to green on Lap 66.

Herta wasted no time picking off the two ahead of him on the road, but then McLaughlin spun again on his slicks at Turn 3, and several sprayed into the gravel in what appeared to be evasive action.

That triggered Caution 7, during which O’Ward became the latest to spin despite under yellow flag conditions and dropped to fourth.

He gave up on his slicks as the next restart came at the start of Lap 71, at which point a time certain 6:15s remained on the clock.

Herta quickly gapped Pagenaud and Power, and continued to pull away despite a nervous moment when he ran wide and touched the grass at Turn 12.

He looked relatively comfortable, although he hardly could have been too comfortable under the circumstances, when Caution 8 was called due to Juan Pablo Montoya stopping with damage on his #6 McLaren SP entry.

That was the last action under green flag, with the race timing out as the field followed the Pace Car yet again.

Just behind the podium, Marcus Ericsson (CGR) earned fourth courtesy of a Lap 72 pass at Turn 7 on Conor Daly (Ed Carpenter Racing), who ended up fifth.

Underscoring the mayhem, Felix Rosenqvist finished sixth despite incurring damage when he ran into McLaren SP team-mate Pato O’Ward at the fourth restart.

The Mexican had lunged at Herta for the effective lead at Turn 1, but succeeded only in spinning himself out.

Takuma Sato also rotated in that incident when he had to take to the grass in evasive action, but the Japanese driver got back to seventh at the chequered flag in his Dale Coyne Racing w/ RWR entry.

Callum Ilott (Juncos Hollinger Racing) took eighth, one spot up on Christian Lundgaard (Rahal Letterman Lanigan Racing), whose #30 Honda was seen trowelled up against the pit wall after the finish.

Scott Dixon climbed from 21st on the grid to 10th in the end, despite crawling into pit lane on Lap 35 when his #9 CGR Honda all but ran out of fuel.

Graham Rahal (RLLR) wound up 16th, having been another who spun during a Caution period, while O’Ward made it home in 17th and McLaughlin 18th.

Grosjean, who found himself off-road on Lap 51 after contact with Harvey in a battle for third, finished 19th.

Palou, who was top of the series when the day began, led briefly on Lap 1 but was never really a factor after his Lap 5 spin which brought about the first Caution of the race.

Another series leader during the season to date, Josef Newgarden (Team Penske), was classified 25th following early contact with Sato, Rossi, and Harvey.

Next up is the Indianapolis 500, for which practice starts this Tuesday (local time).