Herta: ‘That was the hardest race I think I’ve ever done’

Herta: ‘That was the hardest race I think I’ve ever done’ 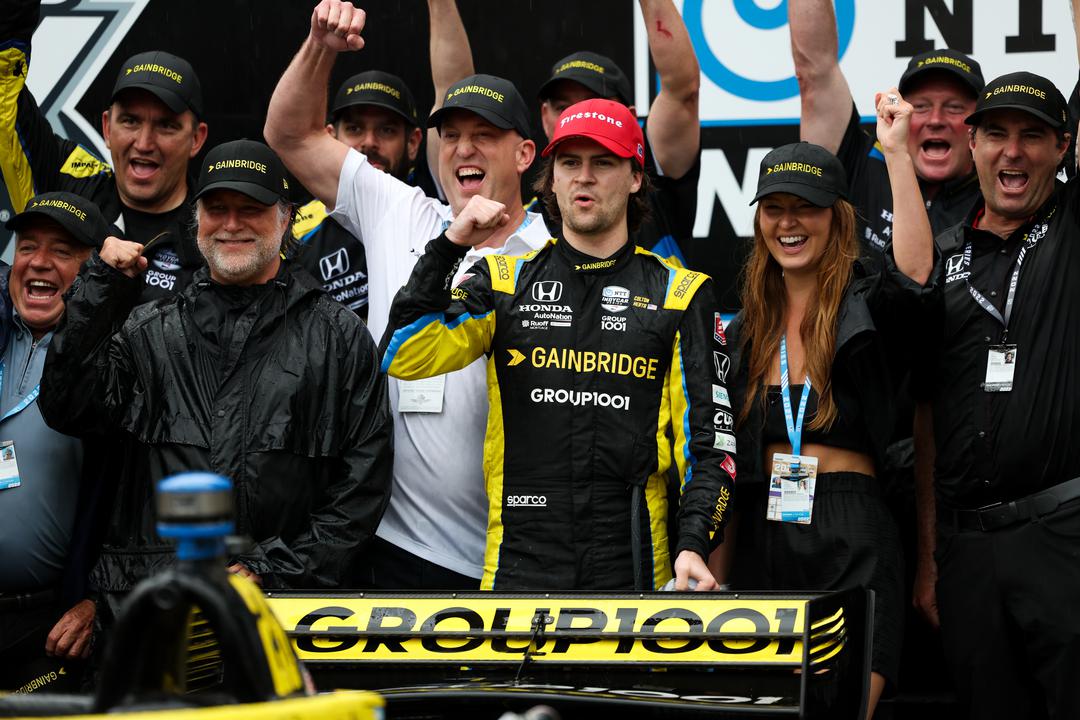 Colton Herta has described the Grand Prix of Indianapolis in which he took victory after 75 laps of mayhem as probably “the hardest race” he has ever competed in.

Herta officially led exactly two thirds of the Race 5 of the IndyCar season but, in effective terms, he held the ascendancy for even more than those 50 laps.

After the start had been declared wet, the Andretti Autosport driver was first to switch to slicks, which made for a hair-raising period as he waited for those tyres to come up to temperature on a track which had not fully dried out.

He pulled off a full opposite lock save just before he hit the lead for the first time on Lap 5, but that was far from the end of the drama.

Constantly shifting weather conditions kept drivers and engineers on their toes, and it was in the sixth Caution period that the #26 crew first had wets laid out, only to change their mind and fit slicks to the black-and-yellow Honda.

Herta was back into pit lane before the restart came, as were most of his rivals, when it was decided that wets were the better option after all.

Even then, it was a struggle to get to the end, with the 22-year-old nearly running off the road in the final laps before Caution number eight, which settled matters.

“That was the hardest race I think I’ve ever done,” he said on the television broadcast.

The sixth Caution played a crucial part in the final outcome, given Scott McLaughlin, Pato O’Ward, and Romain Grosjean were outliers in not returning to the pits to get on wets.

McLaughlin assumed the lead but did not even make it back to the restart before he threw it away with a spin at Turn 10, then Herta made light work of O’Ward when the green flag eventually did come again.

However, Car #26 had only started from 14th, and Herta identified his Lap 2 change from wets to slicks as another major moment.

“It was really just the call for wets to slicks, and then again, the call for slicks to wets, so that made the difference,” he explained in the post-race press conference.

“The team did a tremendous job and they gave me such an incredible car.t

“The most interesting thing is, you never have a car that works in the wet and the dry – it’s just not possible – but it happened today.

“It was very interesting. I felt comfortable in all conditions, and it was fun to do it.”

Herta also talked through his big save, although he admitted he did not know hoe he got into trouble, nor at the time that he was fighting for the race lead.

In case you missed it…@ColtonHerta made this UNBELIEVABLE SAVE, and went on to win at @IMS! #INDYCAR // #INDYGP pic.twitter.com/XpC7G0GKHX

“That was on the rack stops,” he recounted.

“I was shoving so hard to get more wheel, but I couldn’t.

“I need to see the video of what happened, but what I think happened is it was drying, but maybe I went out a little bit wider on the entry of the corner than I had been, and got that left-rear on a damp patch or something.

“That’s what it felt like because I turned in and it just lost everything immediately.

“I thought maybe I was like 10th or 11th, maybe gain free spots from that [first pit stop], so I had no clue where I was on track.

“I guess that was that was one of the only mistakes we made today.”

Herta is now sixth in the series standings, 38 points behind new leader Will Power.