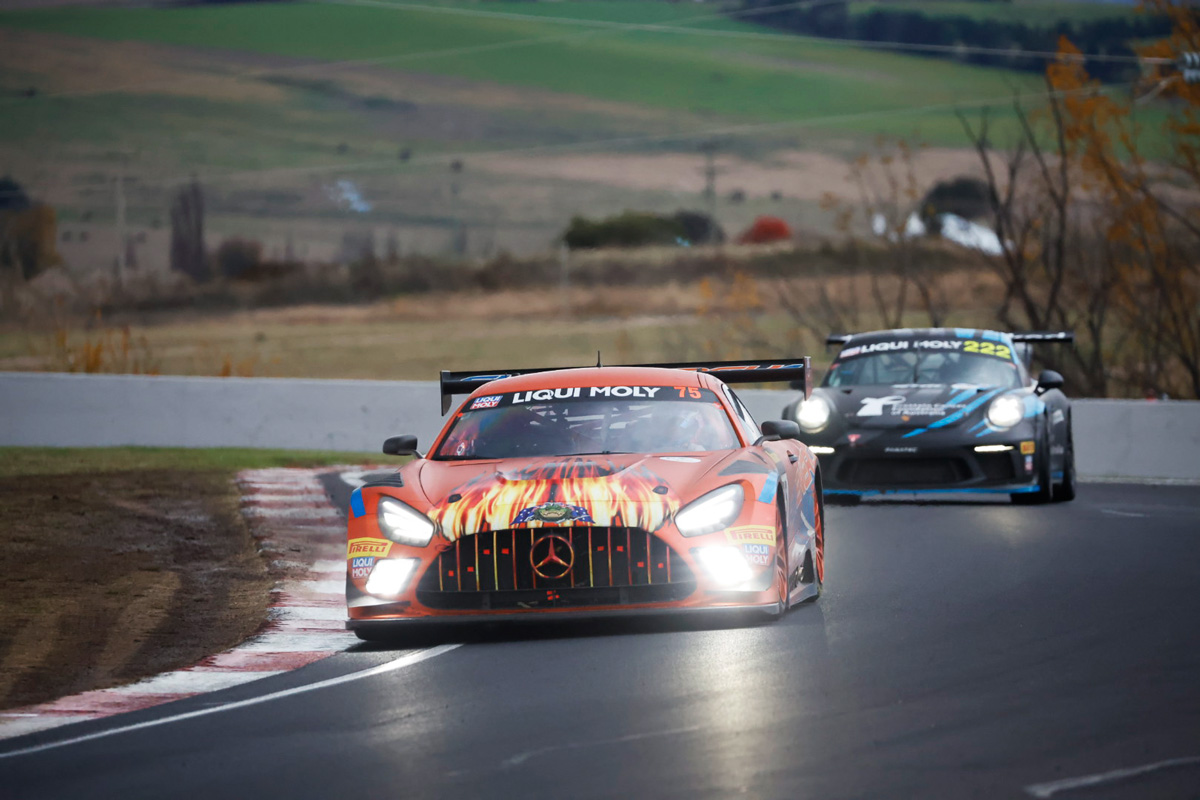 Jules Gounon has become the first back-to-back winner of the Liqui Moly Bathurst 12 Hour in a decade, leading SunEnergy1 Racing into the history books.

Joined by Luca Stolz, Martin Konrad and Kenny Habul, the Frenchman brought the #75 home with 8.7071s in hand as Mercedes-AMG swept the podium.

Audi had utterly dominated the first two days of the event, topping every session across practice, qualifying and the Top 10 Shootout.

But a mix of mechanical gremlins, incidents and penalties crippled the seven-pronged Audi contingent, with an all-Mercedes three-horse race clear entering the final quarter of the race.

In addition to the #75, left in the running was the sister #888 Mercedes (Shane van Gisbergen/Broc Feeney/Prince Jefri Ibrahim) and Craft-Bamboo Racing’s #91 (Maro Engel/Daniel Juncadella/Kevin Tse).

Despite missing qualifying due to an engine change, the #91 had worked its way into the race lead by the midway point thanks to a bold strategy that saw it complete its nine compulsory pit stops (each requiring a 120-second pit lane transit time) inside four hours.

All up, the Hong Kong outfit pitted a remarkable 21 times, with a grandstand finish set up as Engel hunted after Gounon during a double stint to the flag.

Once the penultimate pit stop cycle shook out, Gounon held a 22-second buffer over Engel, with van Gisbergen a further 17 seconds adrift.

Engel closed that margin before the final stops, during which the margin was slashed to just eight seconds by virtue of a cleaner service for fuel and tyres.

However, the gap remained stable from there, with a distinct lack of late incidents to add any late drama.

Van Gisbergen was the last of the top three to make his final visit to the lane, bang on the 11-hour mark, but faded from contention without the pace to match the front pair.

Behind, it was van der Linde who was regularly lighting up the timing screens but down a lap after being whacked with a two-minute penalty during the ninth hour.

That was brought about by a breach of the 80-minute maximum stint duration for an amateur driver, Brad Schumacher having spent 88 minutes in the car in his last run before handing over to Luca Stolz.

That put the #74 Audi off the lead lap, which was not able to recover even during the eighth Safety Car period with the lucky dog rule not applied at that point in time due to wet conditions.

The #74 wasn’t the only Audi to be penalised for a strategy miscue, the #777 entry copping a 30-second hit for a less severe breach of the same maximum amateur driver stint duration rule.

After a chaotic start to proceedings as extended running at dark was combined with intermittent fog and rain, the second half of the race was far calmer with green flag running aplenty.

Soon after the midway point, Tony Bates spun and found the wall at Forrest’s Elbow, putting the #24 Audi he shared with David Reynolds and Cameron Waters out of contention.

Michael Sheargold (#45 Mercedes) was the next to come unstuck, at McPhillamy Park, and it was during that Safety Car intervention that the top five-contending #4 Grove Racing Porsche crashed out heavily.

Stephen Grove slipped on a wet piece of tarmac on the run to Skyline.

From there, an intriguing sprint evolved.

But despite Engel’s best efforts, he could not quite reel in Gounon, who becomes the first winner of consecutive editions of the Bathurst 12 Hour since Darryl O’Young and Christopher Mies in 2011-12.

O’Young is, of course, ironically the team boss at 2022 runners-up Craft-Bamboo Racing.

None of the three Invitational entries made the finish.

The highest-profile car to fall by the wayside was the pole-sitting #65 Audi spearheaded by Chaz Mostert, which ground to a halt on a couple of occasions in the sixth hour requiring a reset.

The Coinspot crew’s day came to an early end when Fraser Ross found the wall at the top of The Mountain at the start of the eighth hour.

Team BRM’s #17 Audi recorded a top 10 finish but was left wondering what might have been, having led the race at one stage despite missing qualifying.

Joey Mawson impressively carved his way through the field in the opening stanza before Nick Percat pressed on.

However, a faulty rain light cost time for repairs, and that was compounded by a long brake pedal requiring a bleed.

The #777 (Ricardo Feller/Markus Winkelhock/Yasser Shahin) meanwhile had a bumpy ride to seventh, most notably losing multiple laps courtesy of a tyre delamination that caused damage to the right-rear.

All told, it was a disastrous day for Audi, and one of celebrations for Mercedes – a script that had seemed unlikely just 24 hours prior.

The Bathurst 12 Hour is due to return to its traditional February slot in 2023.