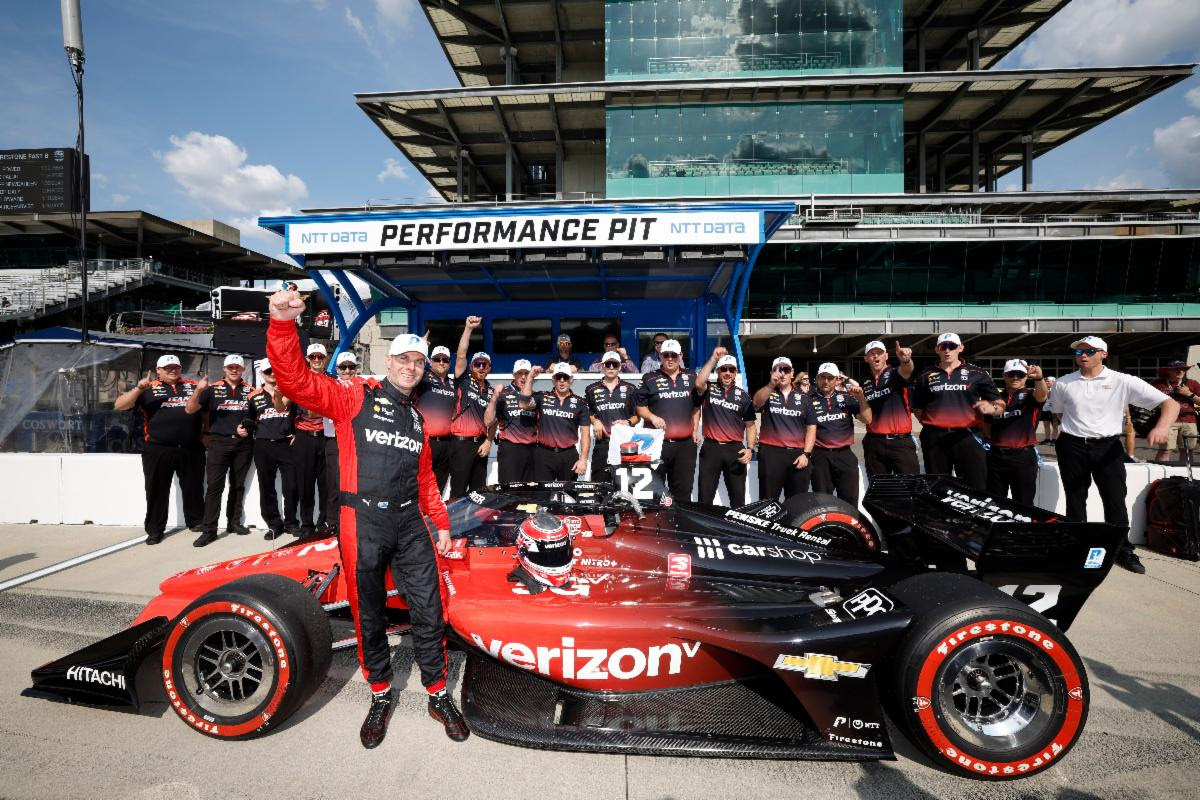 Will Power has qualified on pole position for IndyCar’s Grand Prix of Indianapolis, his sixth on the Brickyard’s road course.

Power edged Chip Ganassi Racing’s Alex Palou and his Team Penske team-mate Josef Newgarden in the Fast Six, with the final lap of the session.

In the third Penske Chevrolet, Scott McLaughlin failed to get out of Round 2 of qualifying and is due to take up 11th on the grid, while his compatriot Scott Dixon will start 10 positions further back in the #9 CGR Honda.

When the Fast Six got underway, Newgarden waited in pit lane as four drivers went out on a first set of used alternate tyres and series leader Palou on primaries.

Pato O’Ward (McLaren SP) banked a 1:10.2349s which was best of the first runs, but matters were decided by each driver’s final lap.

With the chequered flag out, Conor Daly wheeled the #20 Ed Carpenter Racing Chevrolet to a 1:09.9063s to take up third but Power was still going.

Extracting as much as he could from what were necessarily used reds again, the Queenslander set a 1:09.7664s to pip Palou by 0.0426s and move to 64 career pole positions.

Behind Power, Palou, Newgarden, and Daly, were O’Ward in fifth and Rosenqvist in sixth.

In the first two rounds of qualifying, virtually everyone rolled out on blacks and then switched to red tyres for their second run on each occasion.

Considering the reds were really only good enough for one hot lap, when everyone still had new sets at their disposal, a mistake which McLaughlin made in Round 2 proved pivotal.

The New Zealander was forced to go for a second flyer on reds and while he improved with it, the 1:09.7847s which he set was only good enough for 11th.

Palou was quickest in that segment on a 1:09.4114s despite the lap in question appearing to be an untidy one.

Earlier, Power was quickest in Group 1 of Round 1 of qualifying, while Dixon was one of a number of notables who failed to make the cut.

The New Zealander was 0.3480s outside the top six after everyone had done their red tyre run, leaving him 11th in that segment and 21st on the starting grid.

In Group 2, Colton Herta (Andretti Autosport w/ Curb-Agajanian) was just over a tenth of a second too slow to advance, getting bumped out of the cut-off in the final moments by Rahal.

Further back on the grid are the likes of Marcus Ericsson (CGR) in 18th, Helio Castroneves (Meyer Shank Racing) in 19th, Simon Pagenaud (MSR) in 20th, Dixon in 21st, and Juan Pablo Montoya (McLaren SP) in 23rd.