Chaz Mostert ‘channeled his inner Supercar’ to find time in the last sector and secure the Allan Simonsen Pole Position Trophy for the 2022 Bathurst 12 Hour.

It puts the #65 Coinspot Audi R8 LMS GT3 Evo II of Mostert, Fraser Ross and Liam Talbot in prime position for tomorrow’s race which starts under the cover of the early morning darkness.

It was a shootout lap that didn’t seem all that special in the first two sectors, with van der Linde blitzing the middle portion of the lap over the top of the Mountain.

But just as it seemed like all was said and done Mostert dug deep and produced a strong final sector to end the lap in a 2:02.493s to claim his second pole at Australia’s international enduro.

“Just channeled my inner Supercar mate,” he said when asked by Speedcafe.com how the last sector of his lap was so special.

“We’re pretty lucky in these cars we’ve got ABS and all that kind of stuff, so you [can] go searching a little bit.

“It’s a pretty unique end to the lap here, you’ve got two massive braking zones to finish the lap so [I] went really deep at The Chase, somehow the car pulled up and I flowed good speed.

“There’s a lot in this last corner as well which I didn’t quite get right in most sessions in practice and qual but somehow, might have been a bit of dirt on the track which got me rotated and ran to the line,” he joked.

“I’m just an Aussie bogan mate, sometimes you ask me to explain how to do a lap, I don’t even know how I do it myself sometimes!”

Saturday afternoon’s effort makes Mostert the first driver to win the Allan Simonsen Pole Position Trophy twice since it was introduced in 2014.

The 30-year-old said he was humbled to secure a second such trophy given its meaning.

“It’s obviously a very special one, Allan was amazing here GT3 racing in Australia and you never want to see a competitor leave this world,” Mostert expressed.

“He was always so nice around the pits and a great competitor so for me to win this twice is pretty special and to share it with these two guys next to me is amazing.

“It’s something we should really pump up this award because it’s a special one.”

Sunday’s Bathurst 12 Hour begins at 05:15 local time/AEST with live coverage in Australia on the Seven Network and Fox Sports. 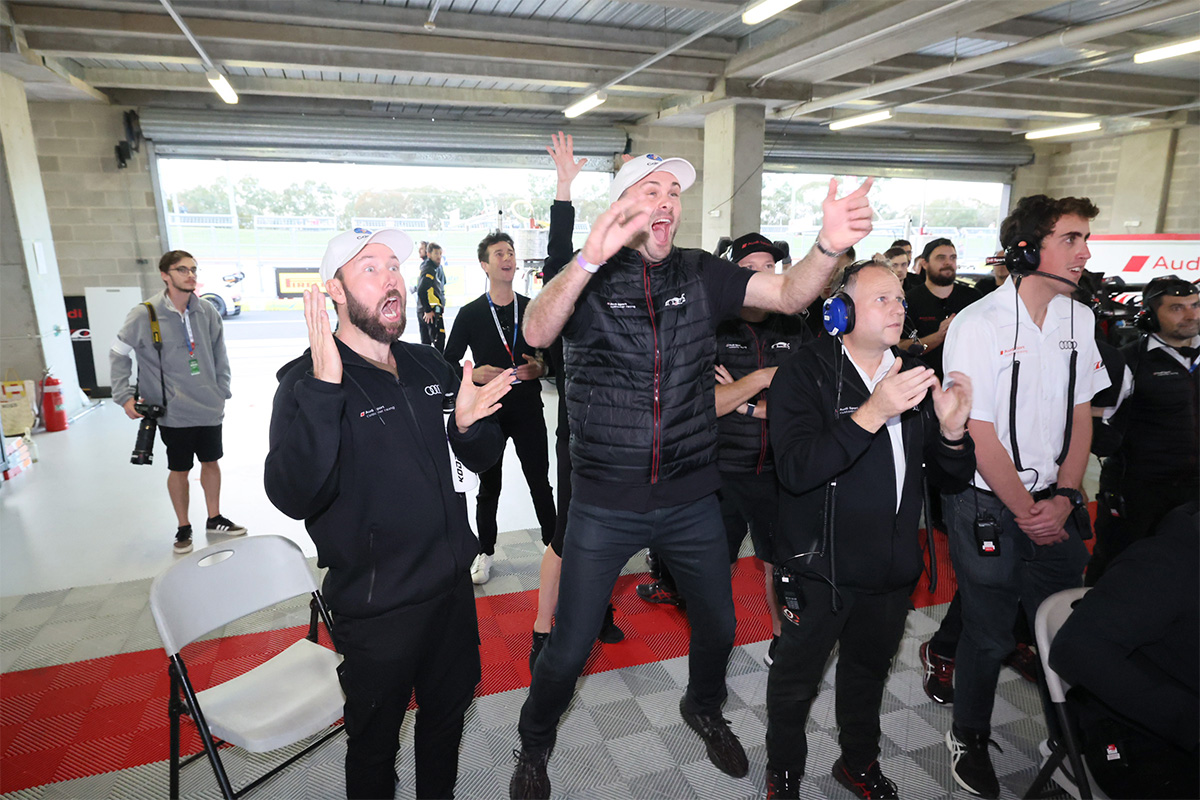 The elation in the Audi garage as Mostert clinched pole. Picture: Mark Horsburgh