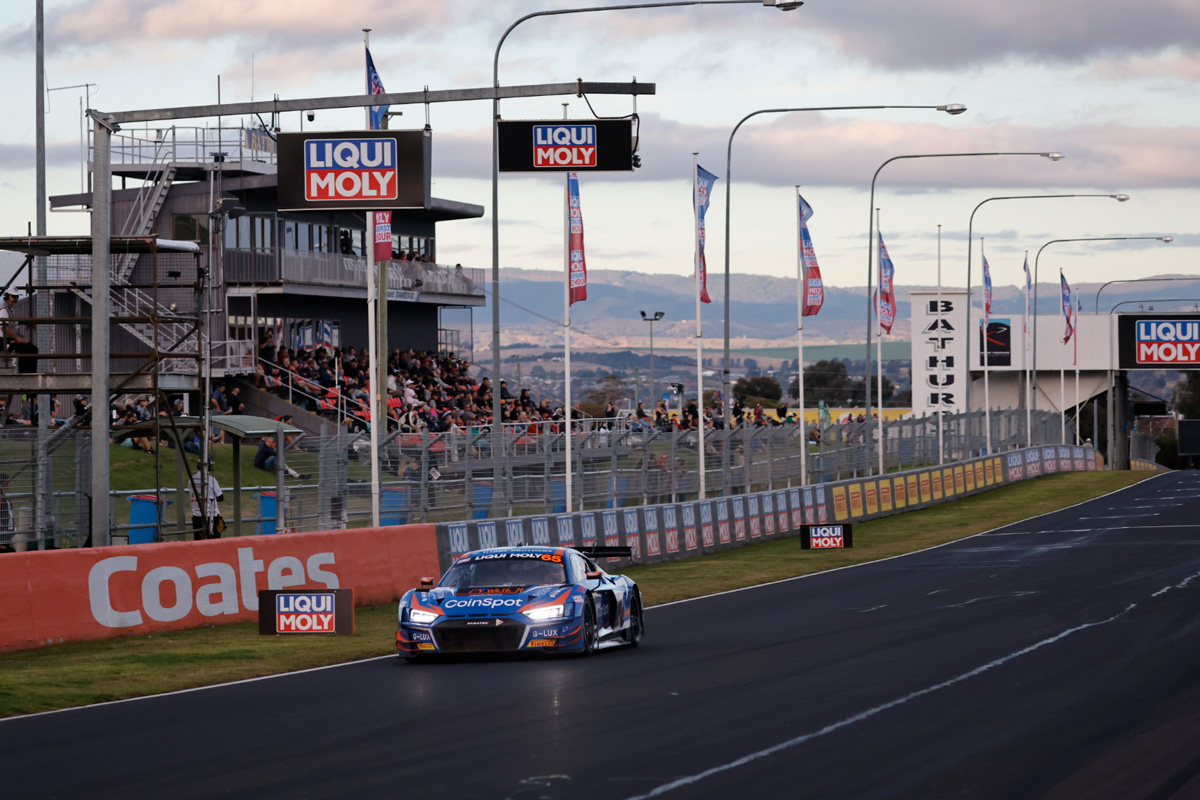 Chaz Mostert on his way to pole position for the 2022 Bathurst 12 Hour. Picture: Ross Gibb

Chaz Mostert has sensationally claimed pole position for Audi in a qualifying duel with Kelvin van der Linde ahead of the 2022 Liqui Moly Bathurst 12 Hour race.

Following the late format change, the Top 10 Shootout was split into a pair of 15-minute hit outs with the bottom five going out first followed by the top five in the second session.

Mostert proved quickest of all at Mount Panorama in a high intensity shootout to decide the grid as the Audi domination continued.

The Supercars star’s outstanding effort means the #65 Coinspot entry he shares with Liam Talbot and Fraser Ross will take the 05:15 local time/AEST start from the top spot under the cover of the early morning darkness.

Mostert traded quickest times with van der Linde in the second session, and just as it seemed there was nothing left Mostert pulled out a 2:02.493s.

Thanks to a strong final sector the lap put the 30-year-old 0.08s ahead of van der Linde, who had already headed to the pits after setting a 2:02.578s.

Van der Linde held onto second position for an all-Audi front row in the #74 entry, while Jules Gounon put the SunEnergy1 Racing Mercedes into third, but seven tenths off pole.

Ricardo Feller, who was the first to find three tenths on the best time from the first session, took fourth in the #777 Audi.

Shane van Gisbergen completed the top five in the Triple Eight Race Engineering Mercedes, and was the first of the cars who set their time in Q1.

Having had several laps to build in, van Gisbergen laid down a 2:03.638s to set the benchmark in the opening session before calling it quits and pitting.

That was until Q2 started and the van der Linde versus Mostert duel saw van Gisbergen’s benchmark smashed.

Lee Holdsworth attempted to pip van Gisbergen in the earlier session but his 2:04.022s put the #9 Hallmarc Audi sixth all told.

Grove Racing’s Ben Barker made a small mistake at the last corner on his final flying lap in the #4 Porsche 911 GT3 R and had to settle for seventh.

Sunday’s 12-hour endurance contest will be broadcast on the Seven Network and Fox Sports in Australia, as well as via live stream for international viewers.