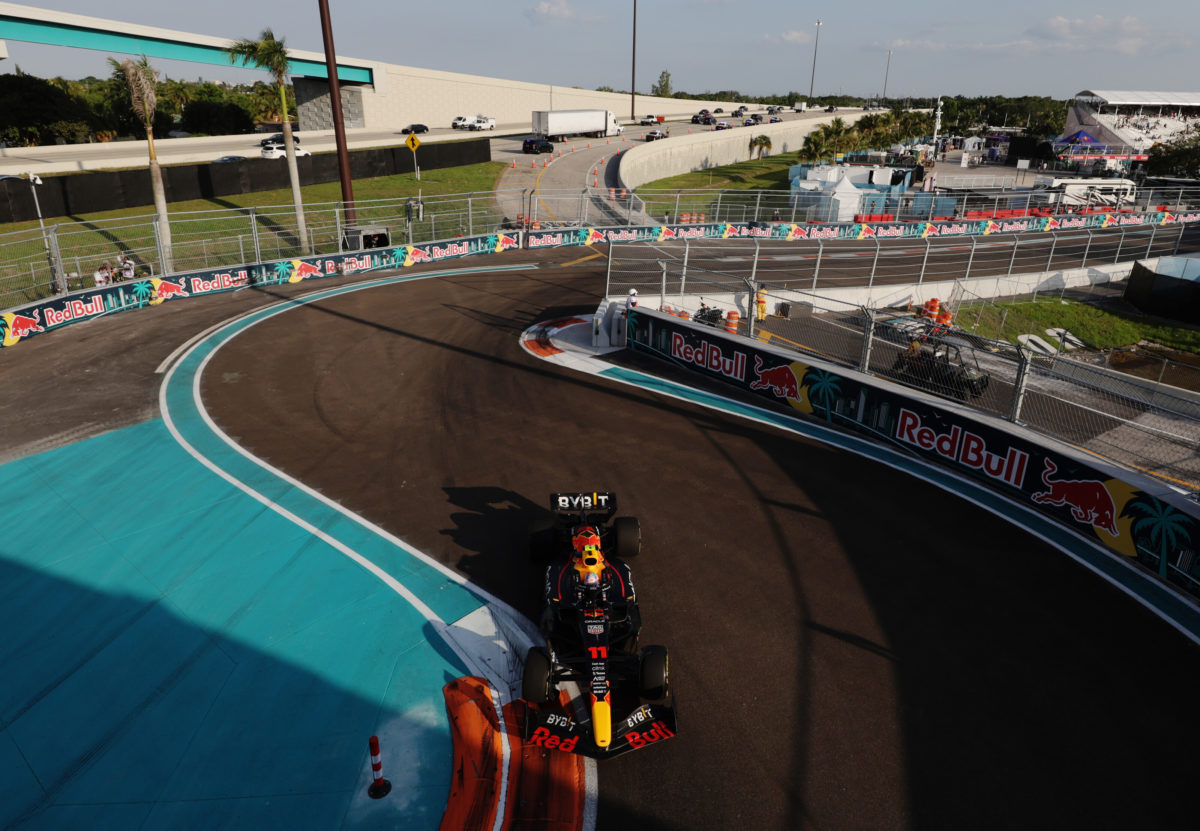 Drivers have called for changes to the Miami International Autodrome after Formula 1’s first visit to the venue last weekend.

Issues blighted the track itself even before F1 headed out on Friday, with repairs to Turns 7 and 17 required prior to the event starting.

There were more issues on Friday night with more work completed on the exit of Turn 17 while drivers complained of a lack of grip off line.

It led Fernando Alonso to proclaim the surface was “not F1 standard”.

Organisers had complied with FIA timings in terms of when the racing surface needed to be laid prior to the event, with work completed 60 days out from the race weekend.

The tarmac mix however is an unusual one, with limestone unusually added into the aggregate and the track artificially aged in an effort to wash away the oils typically produced on a new track (think Turkey 2020).

However, it quickly became apparent that the surface was producing what Alonso described as “gravel” off the racing line – to stray from that was likened to driving on a wet track.

Fears of a processional race followed, though an overnight thunderstorm washed the track and racing on Sunday was better than expected.

However, the criticisms didn’t stop, with race winner Max Verstappen leading their chorus.

“I think offline can be a bit better,” last year’s world champion began.

“We’ve have good examples lately with new tracks where we had good tarmac, like Saudi actually, it was pretty grippy.

“We have to just look at that first of all.

“Of course the racing line has a bit more grip than offline, but I think the difference here is a bit too much in places, so we’ll see what we can do there.

“I think we can make some bits also a bit more exciting, especially sector two.”

The middle part of the lap came under fire from drivers on two fronts, both in terms of the layout but also safety.

Carlos Sainz and Esteban Ocon both crashed at the second gear Turn 13, in the latter’s case doing sufficient damage to crack the chassis on the Alpine.

Meanwhile Sainz was left feeling the effects of his hefty impact with the unprotected concrete wall on Friday for the remainder of the weekend.

“It was 51G [impact] for what should have been not such a big impact,” Ocon described of his crash over the Miami GP weekend.

“Carlos has complained to the race director, we were all there listening to it and nothing has been done.

“Carlos said the impact was way too big and today it felt huge. It’s probably the biggest shunt of my career to be fair.

“So yesterday Carlos got hurt, today I got hurt as well.

“When a professional driver of the calibre of Carlos, driving for Ferrari, says something like this yesterday I think the minimum is that it should be taken into consideration and do the best possible to make a change.”

Lance Stroll described the situation as a joke, a description Lando Norris agreed with.

“There’s some things that we understand and we know better than maybe what they can see, because we know where, like a few more risks are, and where the car’s on the limit and things like that.

“So considering it got brought up [in the drivers’ briefing], and it’s a safety thing, and it’s something that we gave advice on and nothing was done, then I think it was the same as what Lance said.”

Not all drivers agreed that changes needed to be made immediately, with Grand Prix Drivers Association director George Russell acknowledging that changes during the race weekend were not feasible, but that he hoped for tweaks ahead of 2023.

He did however suggest that part of the circuit needed a rethink ahead of next year’s race.

“I think this place could be an amazing circuit if that sector had a rethink,” he offered.

“I don’t think any driver finds that four-corner sequence enjoyable and it doesn’t bring anything. It won’t improve overtaking, it’s not enjoyable to drive.

“This has the potential to be a really great track to drive if they found a slightly different layout there.”

That section of track winds drivers from the end of the first long flat-out section from Turns 8 to 11 to the start of the long back straight at Turn 16.

In doing so, it heads under an overpass and over an embankment, with a clumsy chicane at Turns 14 and 15.

“It’s a chicane that with this generation of cars that are heavy, that are wide, just when you go around those two apex kerbs, it almost feels like you need a bit of luck to get around it,” Sainz explained of the complex.

“You sometimes get it on a weird angle and the car bounces a lot, then sometimes you nail it then you gain a tenth or two.

“So we need something slow, we need something tight, it’s just the nature of the two kerbs there, the way they are put together – which is no issue, it’s a new track, you’re always going to go through these phases, and we’re already in touch with FOM, with Ross [Brawn] and his team to actually sort it out and put together a better piece of circuit.”

Verstappen agreed with the third-place finisher: “If I would have been in a go-kart it would be a nice chicane to take, but not in an F1 car like we have at the moment.

“I remember in the four laps I did on Friday, I almost knocked myself out because I hit the first kerb.

“Maybe we have to change the kerb layouts already, that is a bit more of a progressive ramp.

“But it’s so slow, and I think our cars look way better if it’s a bit more of a flowing combination.”

Visibility while following another car was also cited as a concern through the complex, one which Charles Leclerc admitted he quite liked, though conceded he seemed to be the lone voice with that opinion.

Miami joined the F1 calendar for the first time this season after protracted efforts to get the event off the ground.

Under its current contract, the event looks set to continue until at least 2031.