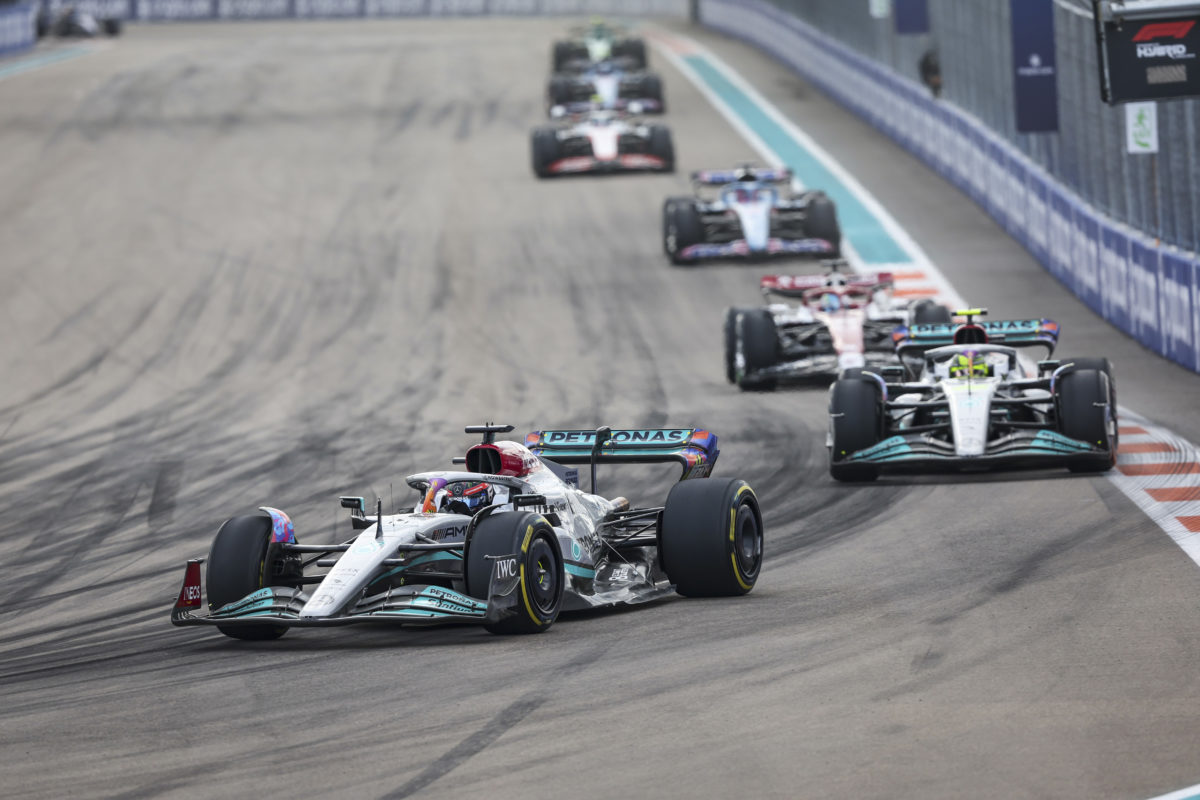 The Formula 1 Miami Grand Prix has helped steer Mercedes towards solving the issues with its troublesome W13.

George Russell finished Sunday’s race fifth, one place ahead of team-mate Lewis Hamilton, on a weekend where the duo were able to offer glimpses of the pace their car possesses.

Mercedes boss Toto Wolff has claimed that the W13 holds strong potential but unlocking that pace has proved difficult.

The squad has been arguably the most affected by porpoising, leading to aerodynamic instability under braking and turn in, and compromising driver confidence.

Set-up changes ahead of the final 60-minute session on Saturday saw that pace disappear, but it was an encouraging development for the team which has dominated much of the last decade.

“Definitely given us answers, on a positive side, that the car is quick when it’s in the sweet spot,” Wolff said after Sunday’s race.

“Understanding where the sweet spot is, is something that we’re going to become a step closer after analysing all the data this weekend.”

Heading into the Miami Grand Prix, Mercedes had a number of development parts which it hoped would give an indication on the direction the squad’s development needed to take.

That has proved the case, though they were by no means a silver bullet – not that the team expected such.

“We’ve been straight from the beginning, flying you know, flying in the fog a little bit,” Wolff added.

“It’s clear there is potential in the car, and she’s fast, we just don’t understand how to unlock the potential.

“It’s probably a car that is super difficult to drive on the edge, dipping in and out of the performance window – more out than in.

“Dissecting the data with a scalpel, it’s just a painful process because it takes very long and as a matter of fact, the data sometimes doesn’t show what the drivers tell us.

“But the data doesn’t show these big swings, so we haven’t had the situation before in any of the years that it just didn’t correlate what we see on the screens with what the driver feels, and that’s making it even more difficult.”

The team’s ‘zeropod’ sidepod concept has been highlighted as one potential reason for its struggles, and while acknowledged as a possibility, Mercedes has persisted with the solution.

Heading into the Spanish Grand Prix next weekend, it’s an event that will offer the team an opportunity to correlate its current performance with that seen during winter testing – when it ran a more traditional sidepod design.

“Barcelona definitely is going to be a point in time where we are able to correlate with what we’ve seen in February, and gather more data,” Wolff agreed.

“I’m also annoyed by always saying the same thing about gathering data and making experiments, but it’s physics, not mystics, and therefore you have to unpick the bones.”