Miller set to learn more on MotoGP future next month

Miller set to learn more on MotoGP future next month 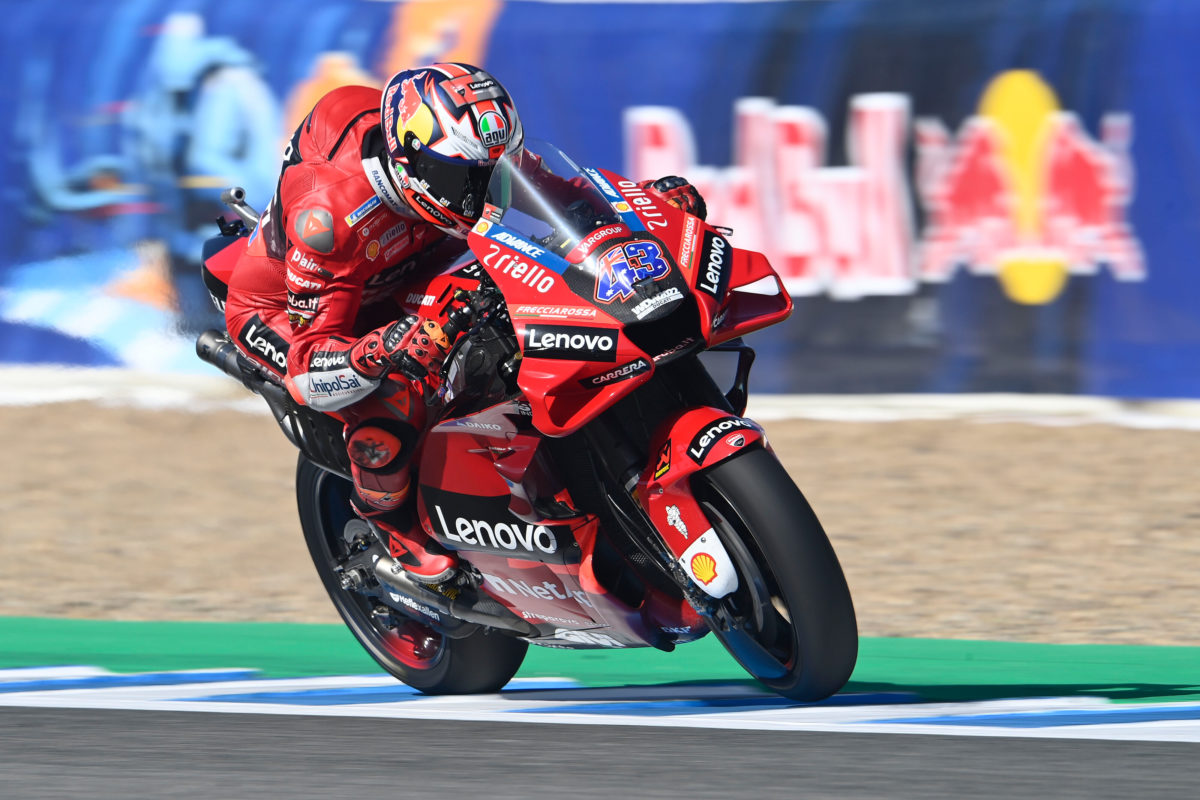 Jack Miller and the other contenders for the second factory seat are set to know their MotoGP futures at Ducati next month.

The Queenslander is in a three-way fight with Jorge Martin and Enea Bastianini for the as yet unfinalised Ducati Lenovo Team berth alongside Francesco Bagnaia in 2023.

Martin arguably started this season as the favourite for that ride, but the Pramac Racing incumbent crashed in the races at Mandalika, Portimao, and Jerez.

Bastianini has managed to win multiple races and lead the championship despite riding a GP21-model Desmosedici out of Gresini Racing, but it would not be unreasonable to surmise that the GP22 fielded by Pramac and the factory team was an inferior package when the campaign kicked off.

Whether or not that is still the case remains to be seen, but the tide appears to be turning considering Bagnaia gave the GP22 its first win last time out at Jerez.

The MotoGP field stayed on at Jerez for a post-race test on the following day, where Ducati Corse sporting director Paolo Ciabatti was quizzed on Sky Sport Italia about Martin and Bastianini.

It was then that he gave a timeline for firming up the Bologna manufacturer’s 2023 line-up.

“Ducati is definitely betting on them in the future,” he said of the two riders seeking to move into a factory seat.

“There is only one place in the factory team, but the goal is to keep them both on a Ducati.

“By June, the situation will clear up.”

Where that leaves Miller is not clear right now, but a return to Pramac could be on the cards.

Factory team manager Davide Tardozzi stated last month at Portimao that “We don’t want to lose Jack” when queried on the television world feed about a report which had him in talks with Honda outfit LCR.

Miller would later deny that such negotiations were taking place, and has previously stated that he “wouldn’t care” if he ended up back at Pramac.

‘Jackass’ spent three years at what is essentially Ducati’s B team, immediately before his promotion to the official works squad in 2021, but Pramac is closely integrated into the manufacturer’s broader structure anyway.

Beyond Miller, an intriguing question is what happens to Johann Zarco, who is currently domiciled at Pramac.

The Frenchman is still yet to win a MotoGP race in his career, unlike Miller, Martin, and Bastianini, but is ahead of the former two of that trio in the championship, and rides the same GP22 motorcycle as they do.

At 31 years of age, however, he is much older than 24-year-olds Martin and Bastianini, while Miller is 27, which could well play against him despite current form.

The 2022 season resumes on Zarco’s home turf of Le Mans this weekend.