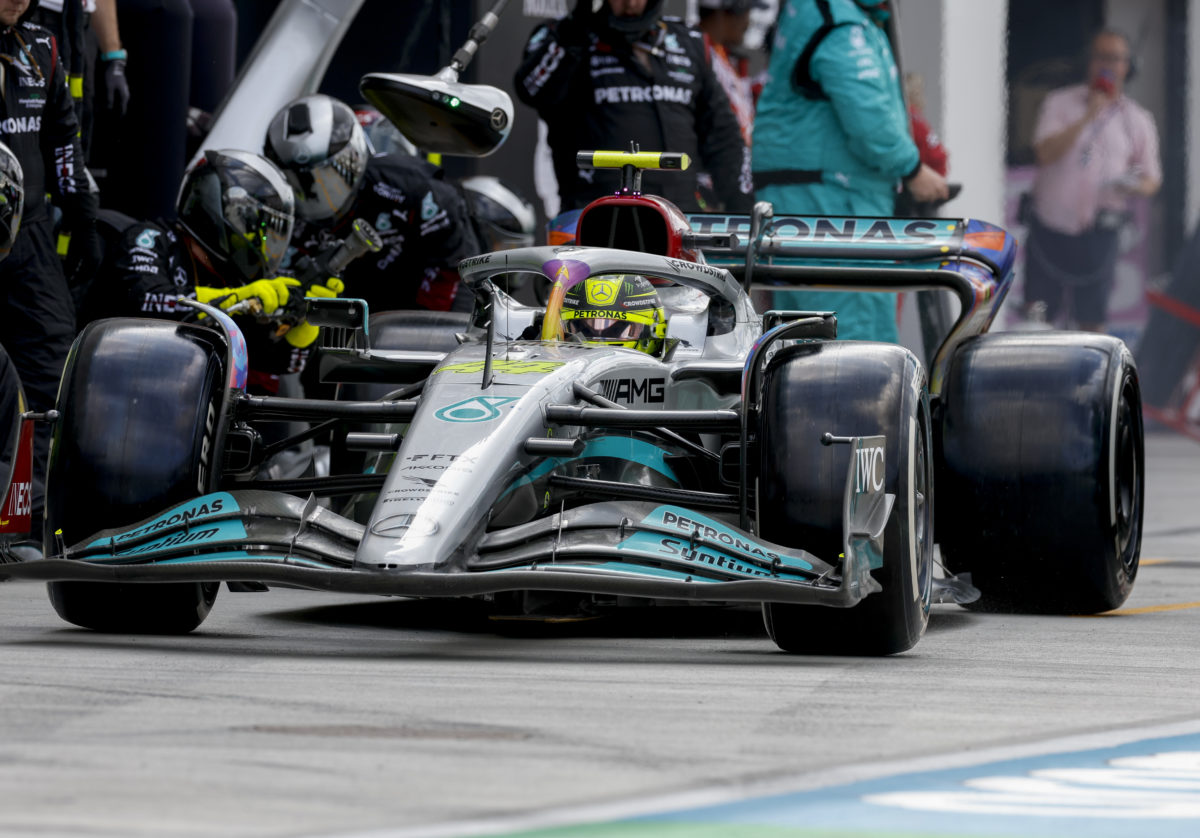 Lewis Hamilton exits the pits during the Miami Grand Prix

Lewis Hamilton was critical of the way the Mercedes pit wall managed the decision not to box him under the Safety Car during the Formula 1 Miami Grand Prix.

Hamilton ended the race sixth, one spot behind team-mate George Russell who did stop for new medium tyres during the interruption.

The Safety Car was called on Lap 42, shortly after Lando Norris and Pierre Gasly made contact, ending the former’s race with the McLaren stranded on the exit of Turn 8.

During that period, Hamilton and the Mercedes pit wall engaged in a conversation as to whether it made sense to pit.

James Vowles: “Lewis, it’s James. We advise staying out but leave it to your decision, you have to make it now”

Hamilton: “I’m going to be at a disadvantage… So who’s directly behind me.”

Hamilton: “How much faster is that tyre?”

Pit wall: “We think probably three or four tenths, but this tyre seems to work better when it’s got a bit of gauge off it.”

Pit wall: “We’ve got one more chance to pit if you think you want to do it.”

Hamilton: “You tell me, man, don’t leave it to me. I don’t want to lose a position.

“So when you’re given the responsibility to make the decision, it feels like you’re gambling, and I don’t like that.

“So I was like ‘you guys make the decision’, but either way it was just a bit unfortunate with the Safety Car.”

Hamilton sat sixth once racing resumed, quickly moving up to fifth when Valtteri Bottas made a mistake at Turn 17 to allow both Mercedes through.

Russell, on new medium tyres, then overtook his team-mate only for race control to instruct his team to reverse the positions, after the Brit was deemed to have gained an advantage by leaving the track.

“There was no dialogue with the FIA, and I think that’s how it should be,” team boss Toto Wolff said of the position swap.

“It’s the FIA coming back to us saying they need to change position.”

The duo promptly reversed their positions before Mercedes’ new recruit put a move on Hamilton at Turn 17 soon after to claim fifth at the flag.

Russell had run an alternate strategy, starting on the hard compound tyres before swapping onto the yellow rubber under the Safety Car.

“That’s a little bit fortunate,” Russell admitted of his strategy.

“You sound like a bit of a genius when things happen, but that’s the case when you’re on an offset strategy.

“We had P7 covered, there’s no point to pit, you may as well just stay out there and hope for something like that to happen.”

Mercedes picked up another 18 points in the constructors’ championship in Miami to remain comfortably third, 62 points down on leaders Ferrari and 49 up on fourth-placed McLaren after five races.