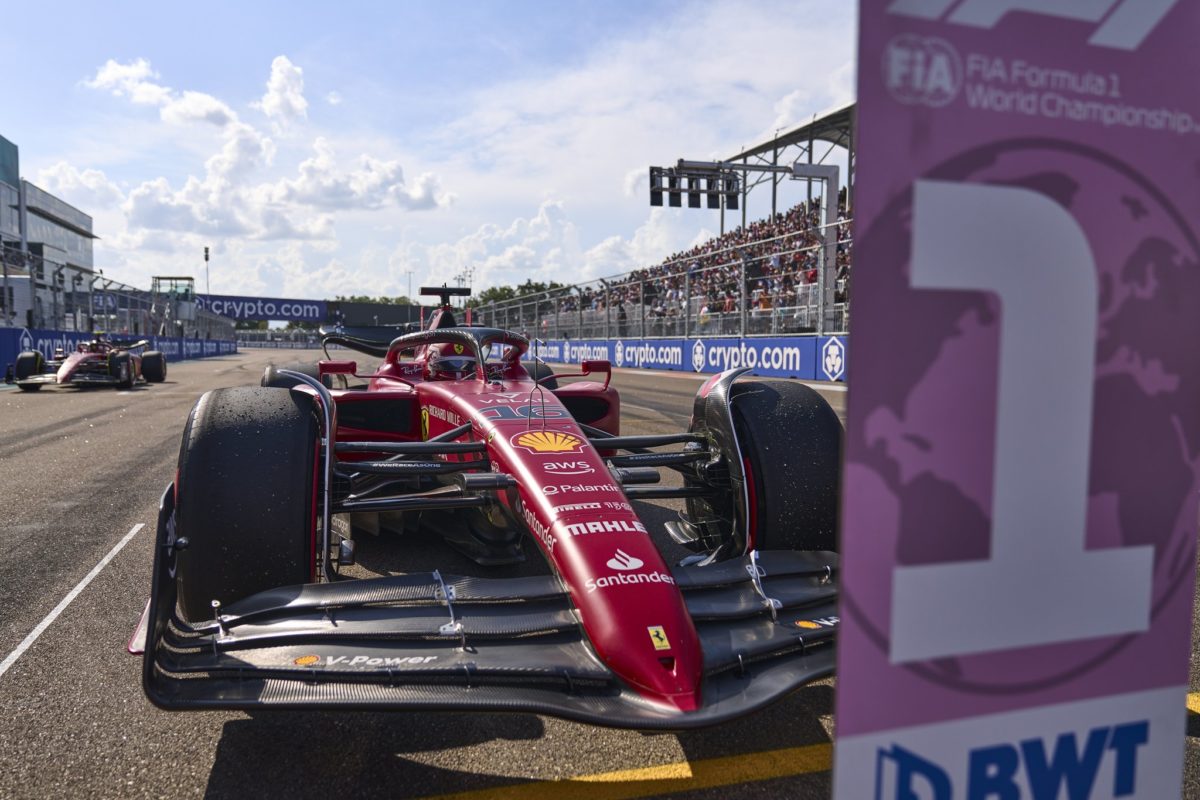 Charles Leclerc will start the Formula 1 Miami Grand Prix from pole position courtesy of a lap he claimed was less than perfect.

The championship leader will head an all-Ferrari front row for the first time since Mexico 2019 with title rival Max Verstappen third quickest.

A late effort from Leclerc was enough to snag the 12th pole of his career on the brand new Miami International Autodrome while a mistake from Verstappen left him unable to improve as he slipped off the front row.

“Tricky, very slippery, it’s sliding all around a bit everywhere,” the Monegasque said of his qualifying lap.

“It’s very, very difficult to put everything together because as soon as you get out of the line a little bit you lose a lot of grip and a lot of lap time.

“So the lap wasn’t perfect, but good enough to be on P1.

“The car was amazing today and hopefully we can keep that pace for tomorrow.”

A lack of grip, especially off line, has been a common complaint about the all-new facility, prompting concerns racing could be processional.

The circuit also includes a number of off-camber corners which have already caught out some drivers, including Carlos Sainz who crashed on Friday at Turn 13.

Combined, it makes for a challenging circuit to get right.

“From Turn 1 to Turn 8, the lap was quite messy, I wasn’t really improving,” Leclerc added of his pole lap.

“I think after the second part of the lap, from Turn 11 to Turn 16, it was quite good, and also the last corner was good even though it was very, very tricky with the change of tarmac today.

“The grip was much lower there compared to anywhere else on the track.”

Conditions in Miami have been the hottest of the season so far, with track temperatures north of 50 degrees during practice and qualifying.

That Ferrari has shown well throughout the weekend to date is promising for the team, especially off the back of the Emilia Romagna Grand Prix two weeks ago.

While Red Bull ultimately had the pace to dominate that weekend, the Scuderia was at least in the ball park, Leclerc leading Sprint Qualifying for a long period in track temperatures some 40 degrees cooler than those in Miami this weekend.

“It works in more or less every condition since the beginning of the season, so that is a good sign for the future.

“But as I’ve said many times, I think the upgrades this year will be very, very important.

“We’ve had a few here, which went in the right direction, and hopefully we’ll have some more during the season to stay on top.”

However, the squad remains down on straight-line speed versus the RBPT-Honda powered Red Bulls, Verstappen and Sergio Perez the fastest through the speed traps at over 334km/h, versus 325km/h for Leclerc.

Heading into the race, the hope is the higher downforce level carried by Ferrari allow its cars to skip clear and remain out of reach down the two long straight sections.

“We’ve got this advantage in the corners which hopefully there will be too far to then have an opportunity of overtaking us in the straights,” Leclerc said.

“Only time will tell, and we’ll only see that tomorrow, but again, the pace of the car is quite strong, so we’ll focus ourselves and see where we are tomorrow.”

The Miami Grand Prix begins at 05:30 AEST on Monday.