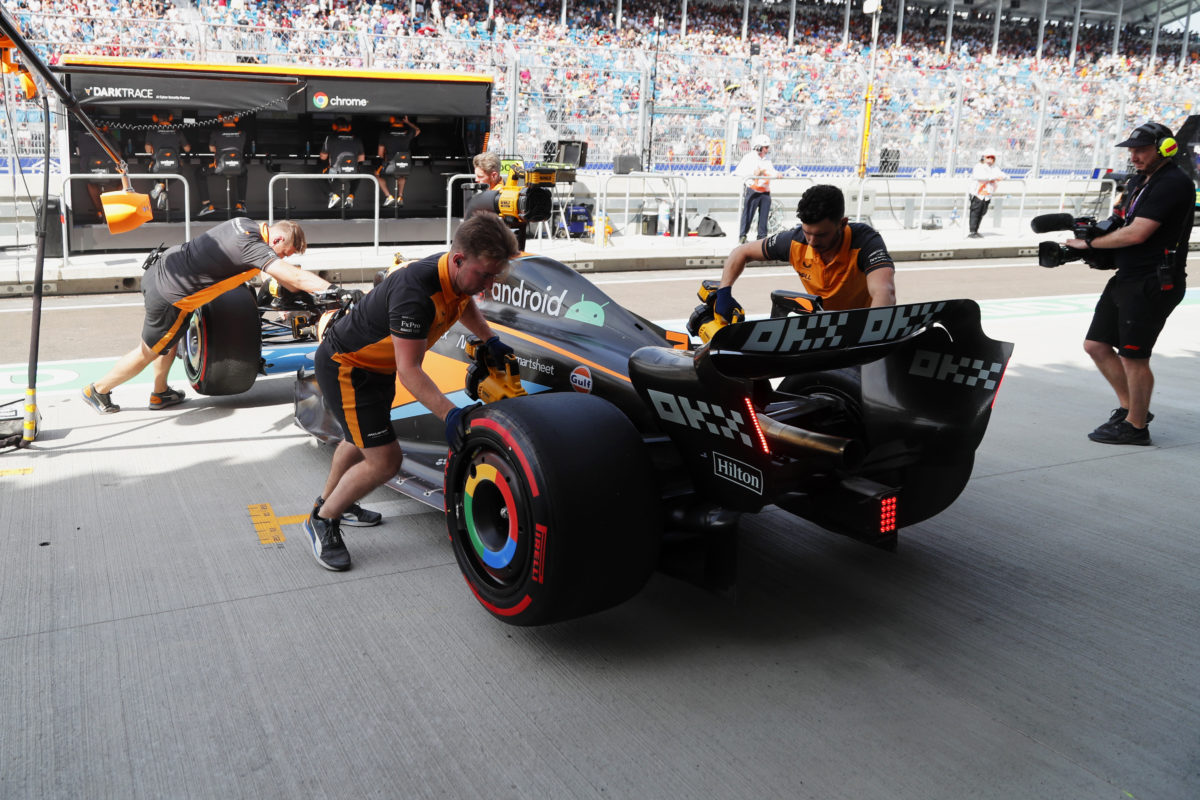 Daniel Ricciardo is pushed back into the McLaren garage

Trouble in the garage left Daniel Ricciardo compromised in the final moments of Qualifying 2 at the Formula 1 Miami Grand Prix.

The Australian sat 15th prior to his final run, climbing just a single position with his last lap to find himself eliminated from the session.

By contrast, team-mate Lando Norris progressed out of Qualifying 2 with the third best time and will start tomorrow’s race from eighth place.

“We had a few issues in the garage,” Ricciardo explained of his early demise.

“We couldn’t get the car fired up in time – we did make it in time, but it was so close on the scheduled time.

“It was just an issue in the garage, so I made the last lap but I had to push pretty hard on the out lap to make sure I didn’t get the chequered flag.”

Ricciardo crossed the line just moments before the flag fell to end Qualifying 2, but with a compromised preparation up lap he faced an uphill battle to improve on his previous effort.

As a result he’ll start the race buried in the pack on a circuit on which overtaking is expected to be particularly difficult.

The all-new Miami International Autodrome has offered little grip to drivers, and even less off line owing to the surface used.

Indeed, that has come under fire from Fernando Alonso, the Spaniard suggesting it’s not up to Formula 1 standards.

Repairs were made at Turns 7 and 17 on Thursday night, even before cars officially took to the circuit, with further work carried out on the exit of Turn 17 prior to Friday’s running.

It left Ricciardo to offer a bleak outlook for Sunday’s race as he offered his own critique for the track surface.

“I can tell you, there won’t be grip offline, you don’t need to wait to see it tomorrow,” he warned.

“It is definitely different. I’m totally okay with not having the same [surface] all 23 places we go, I’m okay having points of difference to make some circuits unique and have their own character.

“But in saying that, this isn’t a nice surface to drive on.

“It’s not that it’s just ‘oh it’s challenging’, but it’s just, again, you literally have to just stay on that one line otherwise you’re not really on the track anymore.

“It just makes it a little bit, in a way, one dimensional because you only have kind of that one option of that one line.

“I don’t want to lie and say I like the surface.”

Grip is expected to be at even more of a premium after thunderstorms hit the circuit on Saturday night, washing away what rubber had been built up on the racing surface over the first two days of running.