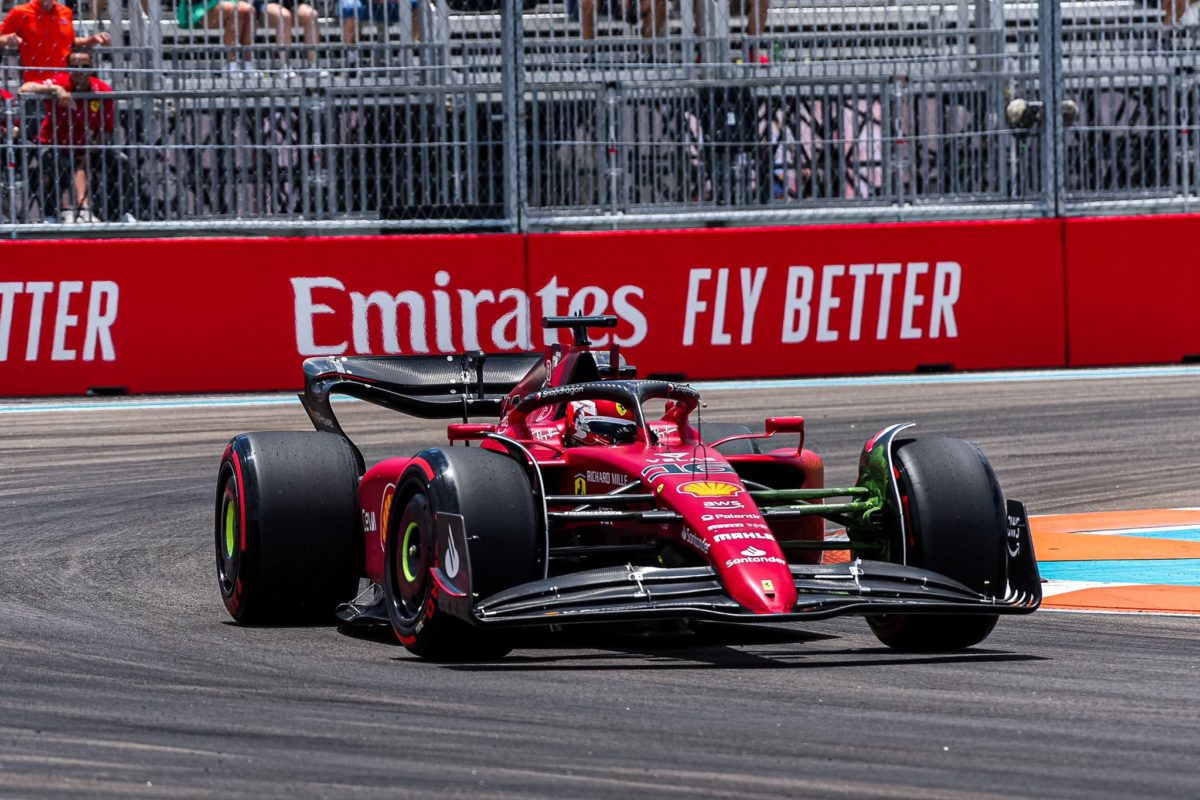 The pair improved with their final flying laps to usurp Max Verstappen, who made a mistake to fall from provisional pole to third.

The Dutchman had a moment at Turn 6 in the dying moments of the second as Ferrari claimed its first front-row lock out since 2019.

Sergio Perez will start fourth while Lewis Hamilton will line up sixth and Daniel Ricciardo only 14th.

Esteban Ocon was the first victim of the three-part session, the Frenchman eliminated without ever leaving the garage.

A hefty crash in final practice cracked the chassis on his Alpine A522 and left insufficient time to building up a replacement ahead of qualifying getting underway.

At 53 degrees, track temperatures had risen slightly since Free Practice 3, while air temps were stable at 33.

Carlos Sainz set the early running, the Ferrari driver logging a 1:30.858s on a set of the soft compound tyres.

A slide exiting Turn 8 on his first real timed lap left Hamilton with a 1:31.550s, which came after abandoning his first flier.

Hamilton was enduring a scrappy session, having also had a lap time deleted for skipping through the fiddly chicane at Turn 14/15, forcing him to stop for another set of tyres.

With two minutes remaining, the seven-time champion sat 18th of the 19 runners in the session.

Hindering his progress was an abundance of traffic, though he still managed to set a personal best through the first sector.

He improved further at the second split, completing the lap to rise to fifth with a 1:30.388s.

As the chequered flag waved, Kevin Magnussen, Zhou Guanyu who was baulked on his final flying lap, and the two Williams of Alex Albon and Nicholas Latifi joined Ocon on the sidelines.

All remaining runners headed out shortly after Qualifying 2 commenced, Leclerc and Sainz both recording 1:29.7s to top the session initially.

Their times had been set on scrubbed rubber, while Verstappen on a new set of the soft tyres recorded a 1:29.202s to shoot to the top of the timesheet.

Russell didn’t set a timed lap until midway through the segment, the Brit struggling for rear grip.

Once he finally managed a lap, the Mercedes driver set only the seventh fastest time, a 1:30.173s to push Lando Norris out of the top 10.

A late run from Daniel Ricciardo saw the Australian start his final flying lap barely before the chequered flag flew to end the session.

He’d suffered a rejected downshift on his earlier lap and sat 15th, but could only improve one spot, while team-mate Norris had risen to third.

Ricciardo was therefore eliminated, together with Fernando Alonso, Russell, Vettel, and Schumacher who was 15th.

Leclerc was the first driver to start a timed lap once Qualifying 3 got going.

Their time at the top was brief, Verstappen setting a 1:28.991s with his first flying lap to leave the top three split by just 0.08s.

All 10 drivers headed out and logged an early lap before touring back to the pits ahead of another.

It left the circuit silent for a time, until Lance Stroll headed the field as they trundled back out of the lane with little more than two minutes remaining, time for just a single flying lap each.

Leclerc was the second in the queue, followed by Sainz, the latter with blistering pace through the first sector.

Verstappen had a poor lap and didn’t improve to remain third while Perez will start fourth.

It’s then Bottas, alongside Hamilton on the third row, with the 10 completed by Gasly, Norris, Tsunoda, and Stroll.

The inaugural Miami Grand Prix gets underway at 05:30 AEST on Monday morning.