Russell on top after promising Friday for Mercedes

Russell on top after promising Friday for Mercedes 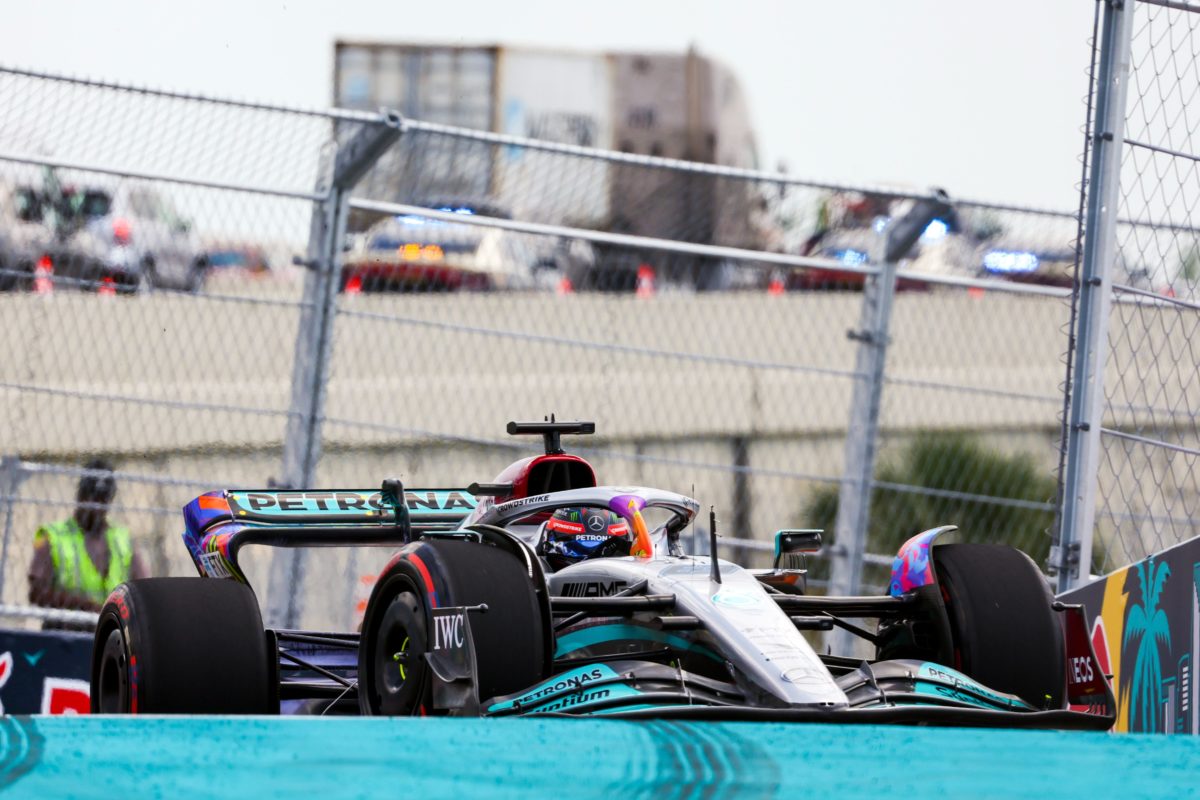 George Russell has underscored the potential Mercedes has this weekend by topping the second practice session at the Formula 1 Miami Grand Prix.

The Brit improved from second fastest in Practice 1 to go top on a 1:29.938s, heading Charles Leclerc and Sergio Perez.

Lewis Hamilton in fourth place served to support suggestions the Mercedes pace is genuine with porpoising seemingly less of an issue than it has been throughout the season to date.

Max Verstappen’s entry into the session was delayed as the squad replaced the gearbox on the Dutchman’s car following a brush with the wall in Free Practice 1.

Also remaining in the shed was Valtteri Bottas, whose Alfa Romeo Sauber was on stands with no rear end fitted to the C42.

It was a less busy start to the session with only approximately half the field heading out as the pit lane opened.

Of those who did so, only Mick Schumacher headed out on the medium compound tyres, the German opting for the white-walled hard rubber.

Track temperature had dropped some 10 degrees from Free Practice 1, though the ambient remained over 30 degrees.

At Red Bull, Verstappen remained in the garage while on track Perez spun at Turn 7, though he was able to gather the car back up and carry on otherwise without issue.

The Mexican promptly logged a 1:31.029s to move himself second fastest, 0.065s slower than Sainz.

After a torrid run in the previous two races, the Spaniard’s run continued after he spun entering the Turn 14 chicane, drawing the red flag after he tore the front left wheel from his Ferrari.

He’d been on a personal best lap to that point, with nine laps to his name, before he locked the rear wheels on entry to spear off the circuit.

The interruption lasted 12 minutes with all remaining runners – Sainz and Bottas excluded – heading back out on track.

That included Verstappen who logged his first lap of the session following a gearbox change, Perez’s mechanics having assisted in the switch.

It was not plain sailing however as he toured around and returned to the points, complaining that the steering felt heavy.

Smoke and flame was seen coming from his right rear, while there was a close call with Lance Stroll, who was forced to go around the outside of the Red Bull as Verstappen struggled to turn his Red Bull left.

As that happened, Russell went fastest for Mercedes on a 1:29.938s with a set of soft compound tyres fitted.

Leclerc was second best from Perez, with Hamilton fourth with 20 minutes remaining and the field’s attentions focused on qualifying simulations.

With the single lap runs complete, the circuit then fell comparatively quiet and attentions turned back to long run pace.

That was until proceedings were again interrupted when a problem for Nicholas Latifi drew the red flag after the Canadian parked his Williams at Turn 9.

It seemed an unnecessary stoppage, the FW44 having pulled up near an opening in the fence into which it could be pushed comfortably under Virtual Safety Car.

Running resumed with nine minutes remaining, Verstappen climbing from his Red Bull as the remainder of the field pulled out of the garages.

His issues were traced back to a hydraulic issue, leaving him without a timed lap in the second 60-minute session.

In the garage next door, the second hour of practice served to reaffirm what was seen in opening practice, with Ferrari, Red Bull, and Mercedes all there or thereabouts at the front of the field.

Behind them, it appears to be nip and tuck between McLaren and Alpine, with AlphaTauri also in touching distance.

With two minutes remaining, Magnussen had a moment at Turn 7 though managed to keep the car out of the fence and rejoin proceedings.

Sebastian Vettel also had a spin, looping his Aston Martin at Turn 11 but likewise able to gather it up and press on.

The chequered flag therefore fell with Russell fastest, 0.1s clear of Leclerc with Perez a further tenth back in third with Hamilton on par with the Mexican in fourth.

A final 60-minute practice session remains, getting underway at 03:00 AEST on Sunday.