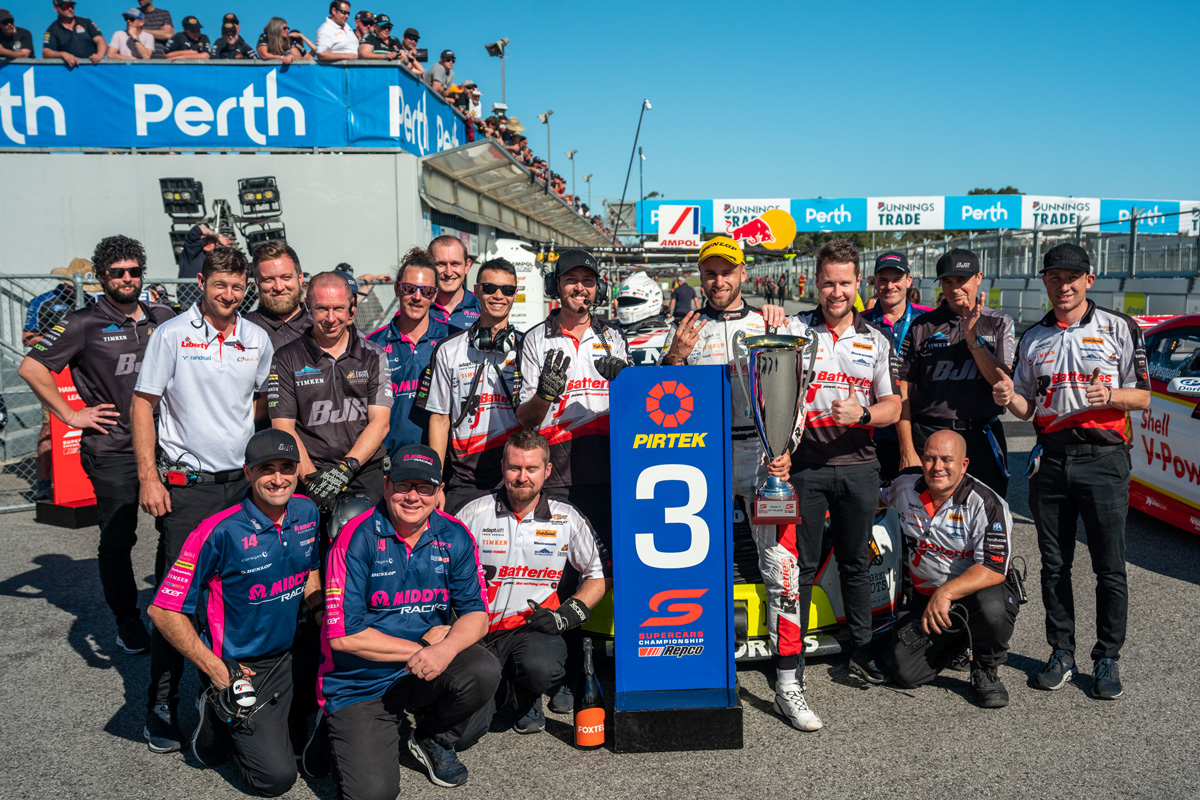 Brad Jones has labelled the Bunnings Trade Perth SuperNight a success for his squad after Andre Heimgartner achieved a breakthrough podium in Race 11.

Heimgartner made the most of a strategic call to pit for four fresh tyres on Lap 29 of 46, bucking the trend of opting for a quicker two- or three-tyre stop.

The move paid dividends with the #8 R&J Batteries Commodore making a late charge to third in a welcome result following two disastrous rounds for Brad Jones Racing at Symmons Plains and Albert Park.

A triple top 10 weekend helped Heimgartner recover ground in the championship, moving from 18th to 13th over the course of the trip west.

“I felt like it was a good weekend all round to be honest,” Jones told Speedcafe.com.

“Andre was in around the top 10 in all three races, got a podium which is fantastic.

“He’s new to the team and we have got some big changes, so I think you’re going to see a little bit of up-and-down, and we have, but this is a really good weekend for us on lots of fronts.

“No one has been here [at Wanneroo] for a fair while so it was good to be able to get here and go well.”

Heimgartner had reacted moments after Race 11 while in Pirtek Victory Lane: “Just really happy for the guys. It’s been a tough couple of rounds and to get a podium, I don’t know what to say.”

That same race did provide some frustration for BJR though with a last-lap clash between team-mates Bryce Fullwood and Jack Smith resulting in a double DNF.

Smith was left beached, while Fullwood pulled his Middy’s #14 into the pits having not been aware it was the final lap.

“Jack was a fair way back going into the corner so I sort of thought I was okay and I obviously got a hit and it ripped a valve out of the tyre and got a flat tyre straightaway,” Fullwood explained at the time.

“I didn’t know it was the last lap so I could have just driven around and finished the race but I was already in the lane.

“It’s a school of hard knocks for us at the moment. I don’t really know, we might have to walk back under a ladder backwards or go pat some black cats or something, I don’t know what we have got to do, but it’s been hard going so far.”

Next up on the calendar is Winton Motor Raceway, before a couple of BJR happy hunting grounds at Darwin and Townsville.

“Really we need Andre to be in the top 10 every weekend and so that’s what the plan is,” said Jones.

“We’ll go there with that goal and same with the other guys, I feel like the other three are moving forward a little bit. It just takes time and we’ll see where we are.”

Before then, BJR will test at Winton on Tuesday, May 10.