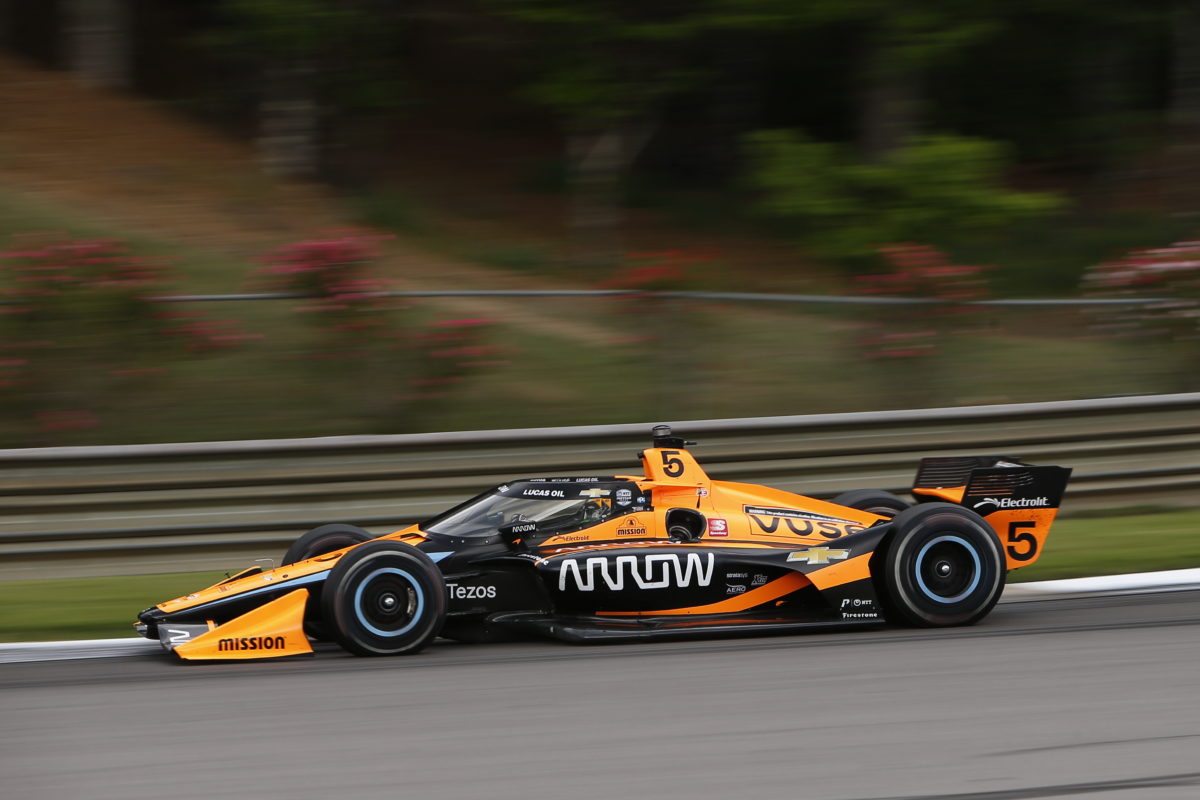 Pato O’Ward has grabbed victory in IndyCar’s Grand Prix of Alabama, while Will Power drove from 19th at the start to fourth at the chequered flag.

McLaren SP’s O’Ward passed long-time leader Rinus VeeKay around the outside of Turn 5 at Barber Motorsports Park at the start of their final stints, and the Ed Carpenter Racing driver would in fact finished a distant third, behind Chip Ganassi Racing’s Alex Palou.

Power was Team Penske’s best while Scott McLaughlin clung on to sixth in the end and their team-mate Josef Newgarden finished 14th after some misfortune on strategy.

Scott Dixon was another big mover, however, climbing from 13th to fifth in the #9 CGR Honda.

Despite still being winless in 2022, Palou now leads the series, with a three-point gap over McLaughlin and another six to Newgarden.

The original start was waved off, with the field finally taking the green flag for the commencement of Lap 2 of 90.

VeeKay led from O’Ward, with McLaughlin gaining one spot to take up third, at the expense of Alex Palou (CGR), and Alexander Rossi (Andretti Autosport) setting off in fifth.

Newgarden dropped from seventh to 10th having been first to start on blacks, Colton Herta (Andretti Autosport w/ Curb-Agajanian) similarly emerged 11th, while Dixon took up 15th on reds and Power 20th on blacks.

VeeKay was leading by more than a second on Lap 10 when Marcus Ericsson (CGR) pitted from 13th to switch from reds to blacks and get some clear air.

Also committing to three stops in the next few laps were Newgarden, Herta, and Romain Grosjean (Andretti Autosport), the latter pitting from seventh to swap reds for blacks on Lap 13.

On Lap 20, VeeKay led by more than two seconds from O’Ward, McLaughlin, Palou, and Rossi, with Dixon 10th and a red-shod Newgarden best of the three-stoppers in 17th.

The gap was still just over two seconds when the two-stoppers started coming in from Lap 28, and all of those had taken service by the end of Lap 30.

Newgarden inherited the lead, with Herta a close second, and VeeKay third on blacks like the other two-stoppers just behind him, but the three-stop strategy was soon ruined.

That was because of a Caution triggered by Callum Ilott (Juncos Hollinger Racing), spun into the gravel at the Museum complex while in battle with Helio Castroneves (Meyer Shank Racing).

The three-stoppers pitted again, essentially getting back onto the same strategy as the two-stoppers, albeit deeper in the field.

Rossi managed to round up Palou for fourth as they checked up at Turn 5/Turn 6, and likewise Dixon past Rahal, although the New Zealander was first of those on reds.

Power was also on reds and those two had risen to just behind Palou as the lap count ticked through the forties, while VeeKay had stretched his lead beyond two seconds again.

Herta, on reds, had hauled his way back to ninth when he passed Rosenqvist at Turn 15 on Lap 47, but Newgarden was making much less progress.

Rossi kicked off the final stops at the end of Lap 60, and the top three were all in on Lap 61.

O’Ward had caught up to VeeKay on their in-lap and while he could not exit his pit box ahead, the Mexican put a brilliant outside move on the #21 Chevrolet when they arrived at Turn 5 on cold, primary tyres.

McLaughlin was still an effective third until Dixon merged in front of him after the more senior of the Kiwis stopped on Lap 62.

McLaughlin then did an O’Ward on the #9 Honda at Turn 5, only to hand the position back almost immediately when he sprayed across the grass at Museum.

Palou gained a position in the cycle, pitting on Lap 63 and rejoining between O’Ward and VeeKay, before Ericsson stopped a lap later again and the order was cleansed.

O’Ward led by a second over Palou, with VeeKay third from Dixon, McLaughlin, and Power, the latter of whom was first on reds.

Seventh through 10th were Rossi, Rahal, Ericsson, and Herta, who had slightly used reds for the run home.

Power passed McLaughlin for fifth at Turn 5 on Lap 68, and the Supercars champion soon found himself under pressure from a still charging Herta.

When Power caught and then picked off Dixon at the same corner on Lap 75, Herta had a big dive at McLaughlin just behind them.

Contact was made, but it was the #26 Honda which spun, dumping Herta back to 10th as the St Petersburg winner pressed on in sixth.

McLaughlin was not safe yet, coming under pressure from Herta, but when Grosjean twice banged into Car #15 at Turn 5 on Lap 87, the #3 Penske driver got let off the hook.

The gap between first and second ebbed and flowed between one and just over two seconds before O’Ward took the chequered flag 0.9800s up the road from Palou, meaning Chevrolet remains unbeaten in 2022.

VeeKay ended up 11.5019s behind Palou, with Power fourth, ahead of Dixon and McLaughlin.

Grosjean passed a fuel-starved Rahal for seventh on the final lap, with Rossi and Herta rounding out the top 10, while Newgarden ended up 14th.

While race day at Barber was May 1 (local time), the Month of May really starts with opening practice for the Grand Prix of Indianapolis on May 14 (AEST).