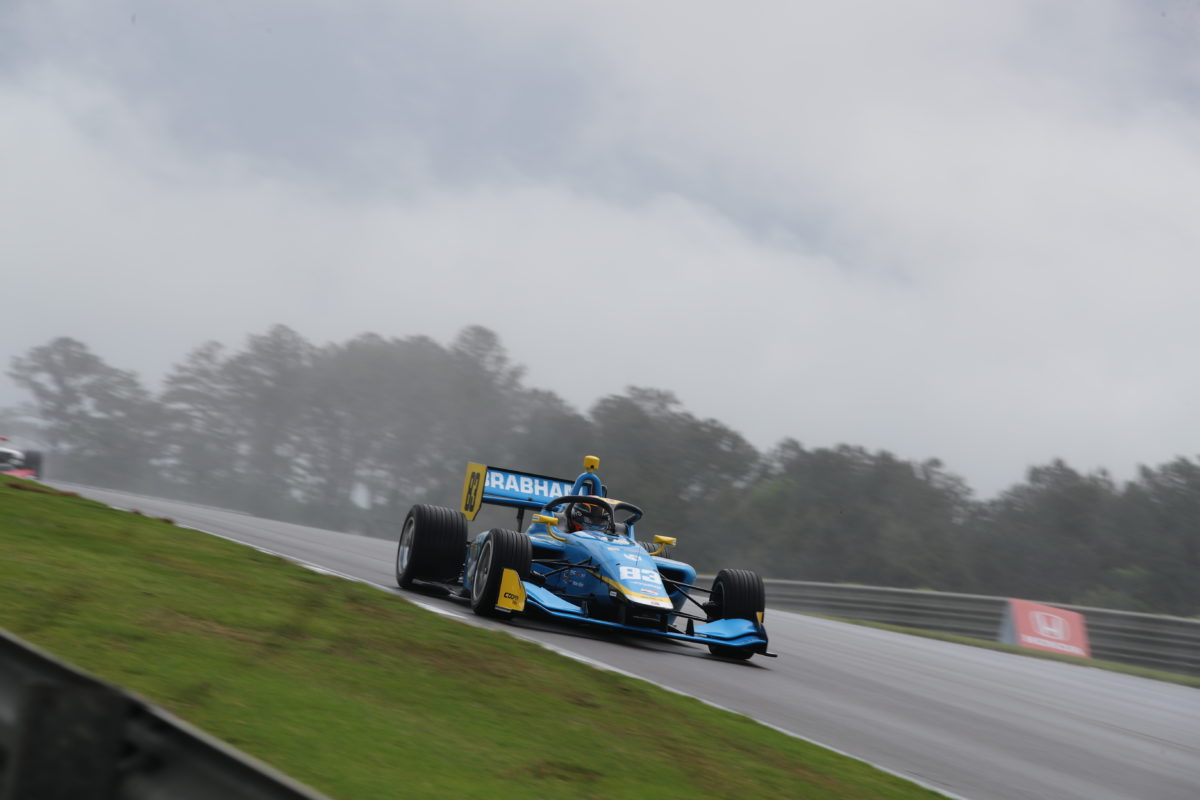 Linus Lundqvist has won Race 2 of the Indy Lights season in Alabama while Hunter McElrea was a non-finisher after a hit with Andretti Autosport team-mate Matthew Brabham.

Brabham was running fifth on Lap 29 at Barber Motorsports Park when the New Zealander went for a pass at Turn 5, in front of the spider statue.

The race line had by then dried out, after a morning storm had left the track soaked for the start and forced the field to run wet tyres.

However, anywhere else on the circuit was still damp, and that is presumably what caught McElrea out when he locked both fronts as he tried to go down the inside, causing him to understeer into the left-rear corner of Car #83.

Brabham managed to drive back onto the track and press on in seventh, the same position in which he would take the chequered flag two-and-a-half laps later, but McElrea had incurred broken right-front steering and would take no further part.

It was an eventful day for Brabham, who qualified ninth but got as high as fourth before his first spin, which was an unforced error on Lap 21 at Turn 2.

The Australian-American has now dropped from first in the series standings after his St Petersburg win to third, behind Lundqvist and Benjamin Pedersen.

“I was making some good passes and having a good time and enjoying it; I should have just taken fourth,” admitted Brabham.

“I thought I could have easily got to third and possibly even catch the leaders and I kind of started pushing a bit too hard.

“And so I just over-pushed into Turn 2, went deep and got in the grass and spun; did a 360 and landed up back on the track but the car stalled out.

“I think I fell all the way back down to seventh and the track was dry by now, so I made it back up to fifth with only a few laps left.

“I was in front of my team-mate Hunter and I don’t know what he was doing but he basically just took me out.

“He’s apologised and we’ll move on from it, but it was lucky I managed to keep going so I still finished seventh after all that.”

Lundqvist (HMD Motorsports w/ Dale Coyne Racing) led all 31 laps at Barber but it was a far from easy victory for the Swede, who came under late pressure from his team-mate Pedersen (Global Racing Group w/ HMD Motorsports).

There was contact in the very last corner of the race but Lundqvist beat the Dane to the chequered flag by 0.1782s, with Sting Ray Robb (Andretti Autosport) finishing seven seconds back in third position.

Having crashed out of the lead in St Petersburg, the latter is 13th in the championship after two races.

Next up is a double-header on the support bill at the Grand Prix of Indianapolis, on May 13-14 (local time).