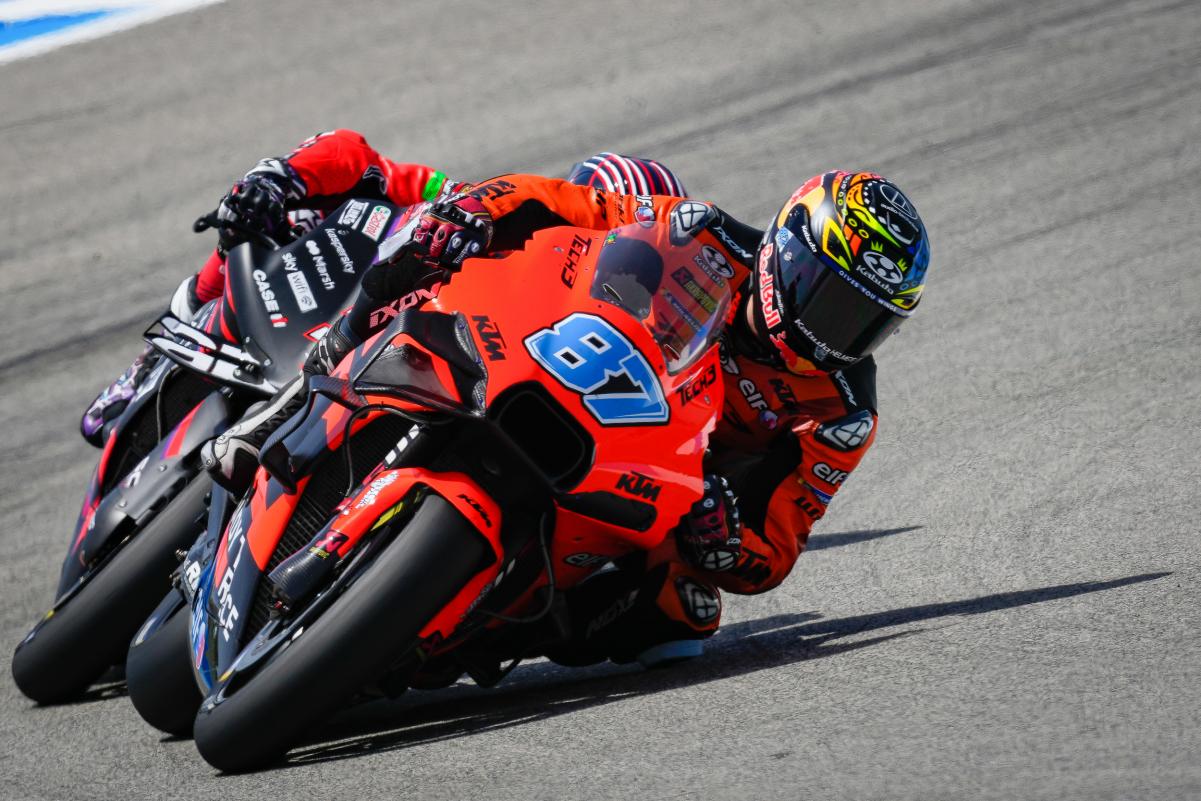 Remy Gardner says his KTM became “unrideable” when he lost one of his winglets just two corners into the Spanish MotoGP.

Debris was seen flying as the field poured through the first sector at Jerez and, as it turned out, it was a piece of bodywork from the #87 Tech3 KTM Factory Racing entry which was shed in contact with Alex Marquez.

Gardner still managed to finish, in 20th, but it was a struggle due to not only reduced but also unbalanced downforce.

“In the second corner, I lost my wing on the front-left side, and the thing is unrideable like that,” said the 2021 Moto2 world champion.

“It was wheelieing everywhere but not like a straight wheelie; it would kind of tilt the bike as well and really pull to the right.

“I was trying, I was pushing, but it was hard, especially in the left-handers.

“I couldn’t even get full gas down the straight because it was just shaking its head and wobbling.”

He added: “I was surprised at the amount of downforce those things create, and how much drag you get from one side only.

“It was not fun. It was honestly probably better just to rip the other one off, throw it away, and keep going.”

Gardner scored one point in Round 1 in Qatar and two points in Round 5 in Portugal, a week prior to the Spanish Grand Prix.

He has failed to add to his tally in any of the other four races to date, but has at least taken the chequered flag on every occasion.

“I never give up. You may as well just stay out there and try and learn something… Today I guess we learned the wings are quite effective,” quipped the Sydney-born rider.

“Even my crew chief said he thought I’d probably stop. But we finished and it’s another race under my belt. You’ve got to finish.

“I knew we were going to struggle a little bit here anyway, but unfortunately that incident cost us a better race today.”

Gardner is 22nd in the championship while team-mate Raul Fernandez, who missed the Jerez weekend entirely due to an injury sustained in Portimao, is scoreless in 23rd position.

The Spaniard is also out of the post-race test which kicks off at Jerez this evening (AEST).