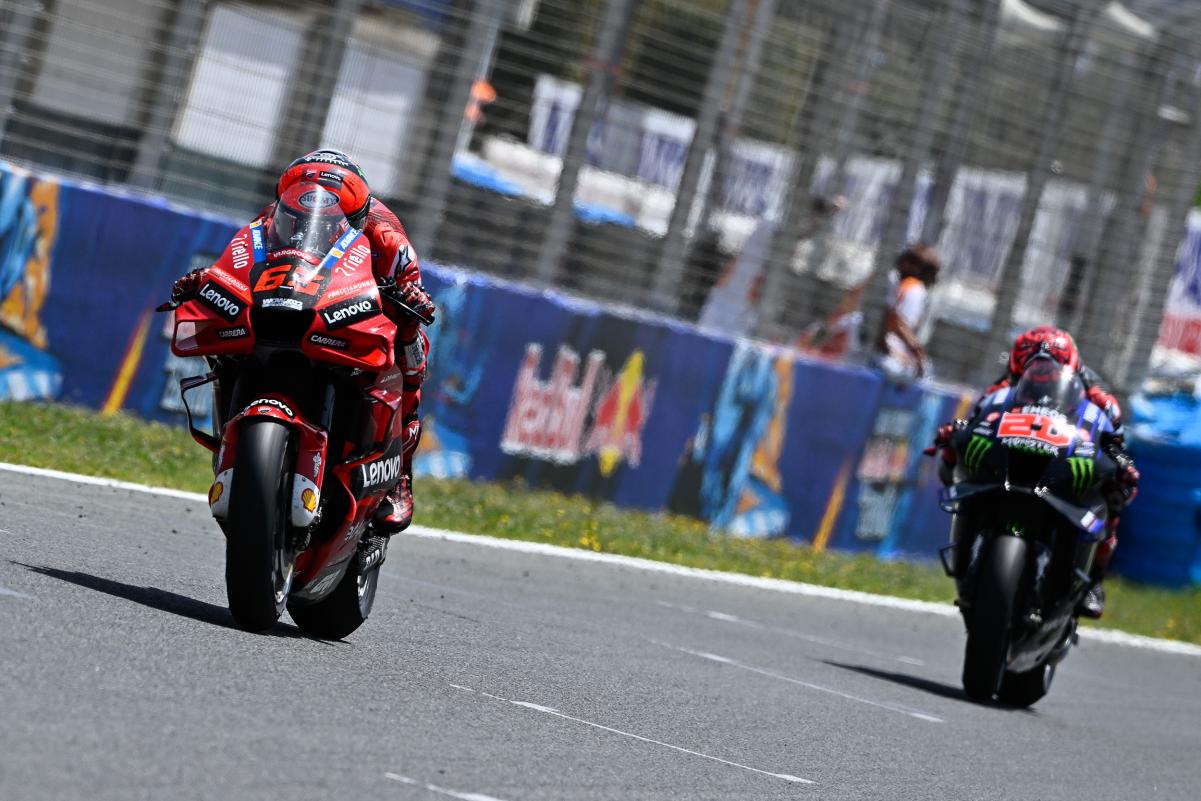 Ducati’s Francesco Bagnaia has won a Spanish MotoGP which he and Fabio Quartararo collectively dominated, while Jack Miller finished fifth.

Bagnaia had broken the All Time Lap Record in qualifying on pole at Jerez on the afternoon prior and got the jump when the lights went out.

Quartararo took up second on his Monster Energy Yamaha while Jack Miller emerged in third position, one up on where he had qualified.

Takaaki Nakagami was fourth and Marc Marquez fifth, while Aleix Espargaro dropped from a front row starting berth to sixth, with the latter having made contact on drag to the first braking zone.

Unsurprisingly, the battle for victory quickly became a two-horse race between Bagnaia and Quartararo, and the start would prove crucial.

The Yamaha pilot could stick somewhere around half to three-quarters of a second behind the #63 Ducati Lenovo Team entry but, even when he crept closer in the latter stages, he was never quite close enough to shape for a pass.

They were separated by 0.478s at the start of the 25th and final lap, with Bagnaia converting for his first win of the season, and the first also for a current-spec Desmosedici after Enea Bastianini’s two triumphs on GP21s.

Officially, the margin of victory was only 0.285s, and that was near enough to representative, but so was the 10.692s gap between second and third place.

For the majority of the race, Miller, on the other factory-entered Ducati, had been just fast enough to hold onto the final podium position despite having Marquez (Repsol Honda) and Espargaro (Aprilia Racing) breathing down his neck.

Both had run fourth and fifth since the end of Lap 1, when Marquez lunged at Nakagami (Idemitsu LCR Honda) at the Lorenzo Corner (Turn 13) and made room for Espargaro to follow, and the six-time premier class champion finally gained another spot with a surprise move on #43 as they rounded the Pons Corner (Turn 5) on Lap 21.

Marquez then tucked the front when the next arrived at the Lorenzo Corner but, rather than go down completely, he pulled off one of his trademark ridiculous saves.

Still, it did cost him two positions, with Espargaro emerging third given he was overtaking Miller at the same time.

The Aprilia rider would convert for a podium which means the Noale marque now loses its development concessions, while Marquez passed Miller for good on the final lap at Turn 8.

Alex Rins (Suzuki Ecstar) started the day in a tie for the lead of the championship but finished the race only one position better off than Gardner, having qualified 14th and then had an early off-track excursion.

Jorge Martin (Pramac Ducati) was last classified finisher in 22nd, having remounted after a crash on Lap 1 which apparently involved Stefan Bradl, who was a wildcard for Team HRC.

In the championship, Quartararo has pulled a clear, seven-point gap, with Aleix Espargaro now his nearest rival in the standings.