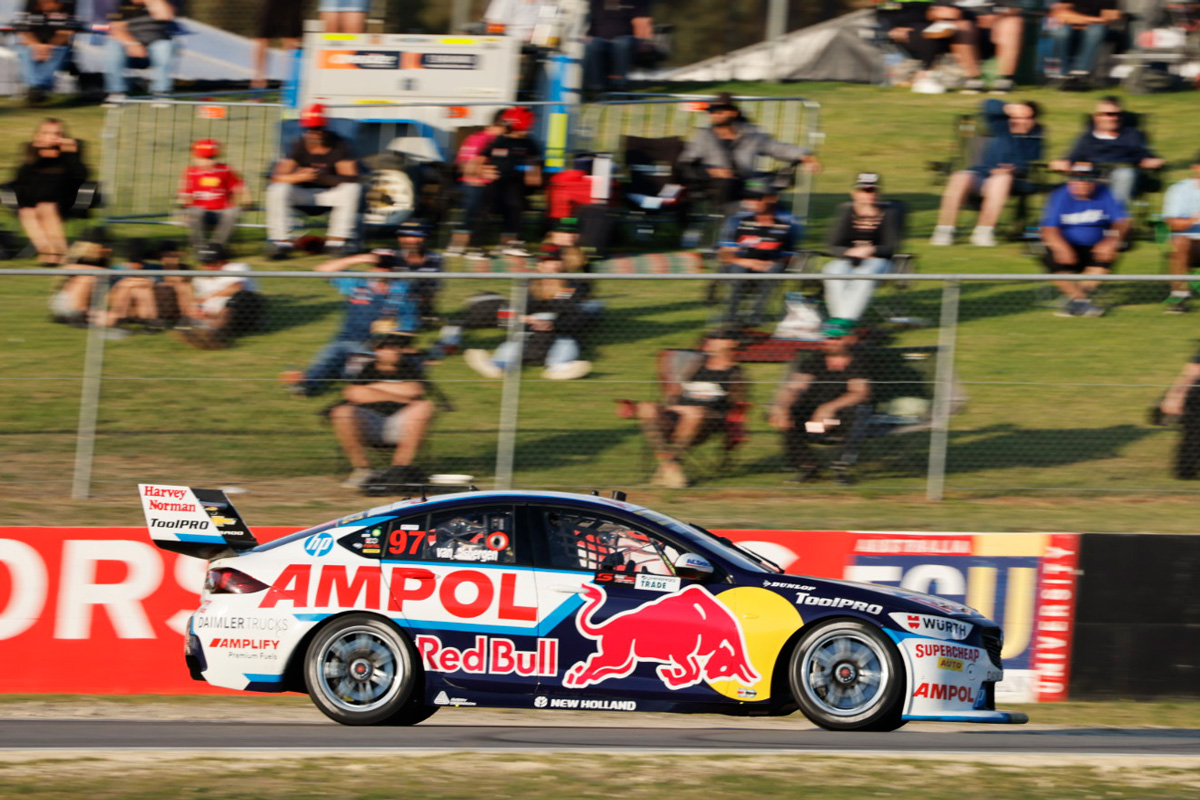 Shane van Gisbergen has made it two wins from three attempts at the Bunnings Trade Perth SuperNight, overcoming Will Davison and James Courtney to win Race 12.

Having taken victory in the earlier Sunday race, Davison threatened to go back-to-back before van Gisbergen fought his way to the pointy end.

Davison snatched the lead from van Gisbergen at the start but it was David Reynolds who was the best starter of the front quartet, mounting an immediate challenge for the lead.

Davison just hung on, and Reynolds would be relegated to third before the end of the lap as van Gisbergen capitalised on a Turn 6 lock-up from the #26 Grove Racing driver.

By Lap 13, van Gisbergen was all over the back of Race 11 winner Davison, but after the two-time champion was unable to execute a pass, the status quo remained through to the pit stop cycle.

Both of the leaders pushed their opening stint past the midway point of the race before Red Bull Ampol Racing blinked, bringing Car #97 in on Lap 25.

Davison pitted the next time by, and rejoined ahead of van Gisbergen – but both were behind early stopper Courtney.

Courtney had come in for fresh tyres on Lap 12, running fifth at that point in time, leaving serious question marks over his ability to hang on until the end.

On Lap 28, van Gisbergen got a good run out of Turn 6 to take Davison at the next corner, although the re-energised #17 Shell Mustang driver did not make life easy, and continued to pressure his rival for the following couple of laps.

All the while, Courtney was hanging on nicely at the front, maintaining roughly a two-second buffer into the final 10 laps.

Courtney indeed took the on-the-road lead once Anton De Pasquale peeled into the pits on Lap 31, returning in the back half of the top 10.

Having not initially realised Courtney was the race leader, van Gisbergen managed to narrow the margin to one second as Lap 39 commenced, with the #5 Snowy River Caravans Mustang in his sights, and got the job done at Turn 7 on Lap 40.

With a grandstand finish set up, it was van Gisbergen from Courtney, Davison, De Pasquale, and Reynolds in fifth as the race restarted with two laps remaining.

Friendly fire broke out on the penultimate lap when Brodie Kostecki attempted to divebomb Broc Feeney at Turn 7, only to sail past and into his cousin Jake Kostecki.

The latter, who had been enjoying the best day of his Repco Supercars Championship career, was forced to retire, beached in the gravel trap.

Van Gisbergen cruised to victory while Courtney staved off Davison and De Pasquale’s advances to secure second place and his first ever podium at Wanneroo Raceway.

Behind the top four, Will Brown snatched fifth from Reynolds, with Cameron Waters, Todd Hazelwood, Andre Heimgartner and Tim Slade rounding out the top 10.

Mark Winterbottom was 20th, having been penalised for turning Thomas Randle around on the opening lap, with the latter 22nd.

Only 24 cars took part, Scott Pye a non-starter after his Race 11 crash.

Van Gisbergen now holds a 164-point lead over De Pasquale in the drivers’ championship, with Winton Motor Raceway next up in three weeks’ time.