Race 11 of the Repco Supercars Championship has been red-flagged after a big Scott Pye crash at the end of Lap 1 at Wanneroo Raceway.

The reds were unfurled at around 12:11 local time/14:11 AEST, as the field trundled around under Safety Car on Lap 3, with Pye’s battered #20 ZB Commodore sitting next to the front straight.

Thankfully, the Team 18 driver was able to get out of the vehicle under his own power and walk away.

However, the stoppage has been necessitated by damage which the impact caused to a gate midway along the pit wall.

Replays showed that Pye had tangled with Jack Le Brocq in the back half of the field as they exited Turn 7 (final corner) at the end of the standing lap.

It looked as though they had made front-to-rear contact as they came off the big exit kerb, before Pye continued to move across the track towards drivers’ right as they accelerated along the straight.

However, the #34 Matt Stone Racing entry had an overlap, and Car #20 was turned across its nose once they reached the edge of the track, spinning it into a heavy hit with the pit wall.

The Team 18 car is highly unlikely to return to action today at the Bunnings Trade Perth SuperNight.

“Sometimes people forget they can lift as well, so I don’t know, I thought I was clear and tried to defend, but obviously I wasn’t, but f###, he just didn’t lift.

“It was massive so we’re out today. That was such a big hit.”

Le Brocq was more certain that there was an overlap.

“I just came off the last corner and had a bit of overlap there and Scott has just kept coming across,” he recounted.

“I don’t know, it’s no good to see any cars damaged but at the same time we’re all out there racing, it’s just unfortunate I think.”

On suggestions from Pye, and Team 18 boss Charlie Schwerkolt, that he should have lifted, Le Brocq responded, “I suppose you can, but then every other time, he’s going to do the same thing and how many times are you going to try to run us off the road?

“I don’t want to see cars damaged, it’s the last thing we want up and down pit lane…”

Schwerkolt, who had reasoned that the MSR driver “could have backed out”, reaffirmed Pye’s suggestion that #20 is out for the balance of the weekend.

“I think the whole birdcage… massive, massive hit in that left-rear so I can’t see much happening there.

“I think we just try to get it into the truck and regroup for Winton.”

Cameron Waters (Tickford Racing) was leading at the time of the stoppage, having jumped pole-sitter Will Davison (Dick Johnson Racing) from the outside of the front row.

Lee Holdsworth (Grove Racing) sustained significant damage to the left-front corner of his #10 Mustang in a separate clash with Thomas Randle (Tickford) as the field ran towards Turn 2 on Lap 1.

Race Control has advised that no further action will be taken over that incident, while a new lower control arm was fitted to Holdsworth’s car during the suspension in proceedings. 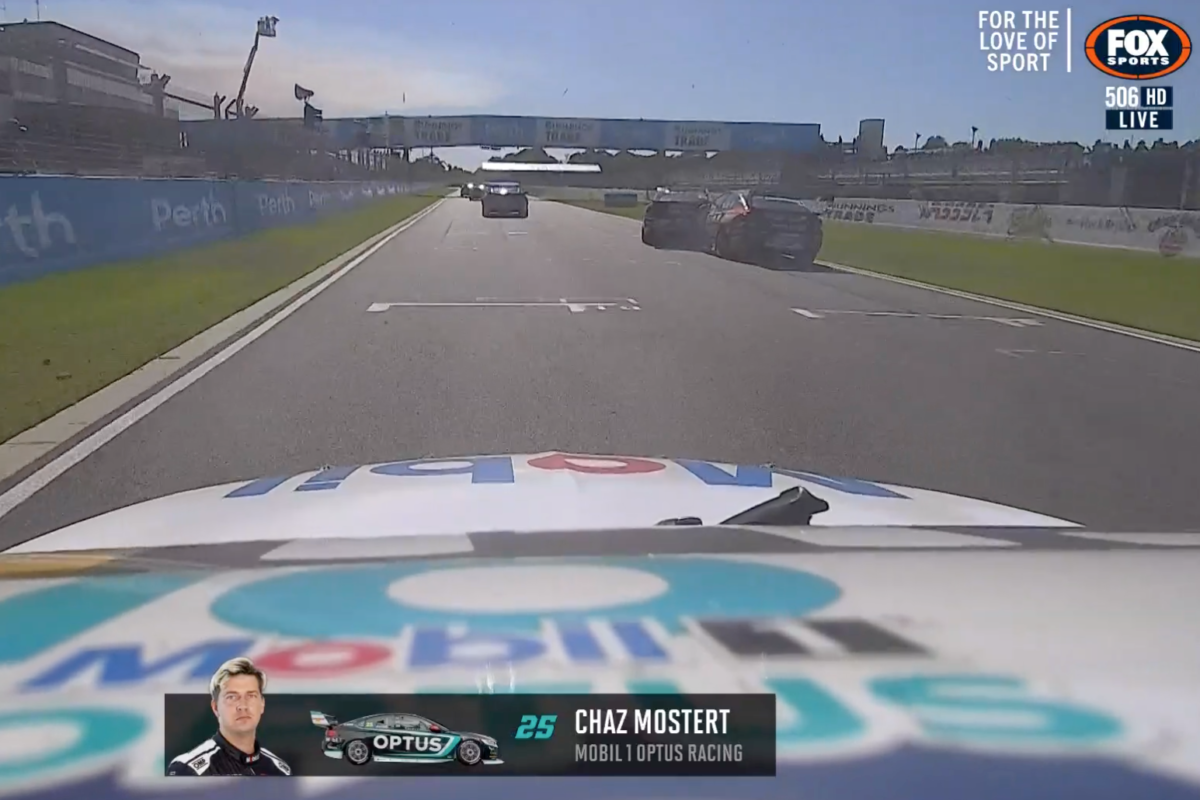