Bryce Fullwood has labelled Nick Percat’s actions “a bit silly” after they ran into each other in Qualifying for Race 11 of the Repco Supercars Championship at Wanneroo.

Percat was straight back into the pits at the start of the opening session of the morning at the Bunnings Trade Perth SuperNight, with witness marks on his ZB Commodore and comments from the Walkinshaw Andretti United camp suggesting contact with his predecessor in Car #2.

Replays confirmed just that, specifically a side-to-side hit as they drove out of the long, Turn 6 right-hander known as ‘Kolb Corner’, the effects of which were visible considering how the WAU driver had to hold his steering wheel as he continued on down the back straight.

Percat had been following Fullwood, who was weaving in order to generate tyre temperature for his first run in the 12-minute session, before trying to drive through a small gap on drivers’ right when the hit occurred.

“It’s hard here warming up. Yeah, we were just warming up together and I was doing my thing and I was passing him up on the right-hand side and as he’s warming, it’s just collected the front.”

Fullwood’s take was less passive with respect to attribution of blame. “Obviously, we were all just warming up and there was a big gap in front of him,” recounted the Brad Jones Racing driver.

“So, I got past him and obviously he really wanted to get back in front of me, so he was up over the kerb in the dirt and drove into the side of me.

“So, a bit silly for qualifying, but anyway, it’s all good, we’ll press on.”

WAU threw a new steering arm at the left-front corner of Car #2 but Percat still only qualified 25th-fastest in the 25-car field.

No penalty was announced regarding his run-in with Fullwood but, somewhat ironically, he is currently set to start 24th given Mark Winterbottom got a three-position grid penalty after impeding both of the Triple Eight Race Engineering cars.

Whether Percat might have done much better is questionable, however, given both he and team-mate Chaz Mostert were among the very slowest in the field in both 12-minute sessions of the morning.

“It’s not ideal, but we’ll keep battling,” added Percat, between those sessions.

“Obviously then I did my lap on a cold car and there’s a lot of time in the brakes being hot and the gearbox and everything being hot, so not ideal.

“But, the boys are digging deep, mega job by them to get it back out, and in the end, just throwing a lot at it to try and get this car to the front.

“Everyone [is] just keeping in there I guess; it’s only one weekend, and it’s the year that is what shows what we’ve got, so we’ll see how we go.” 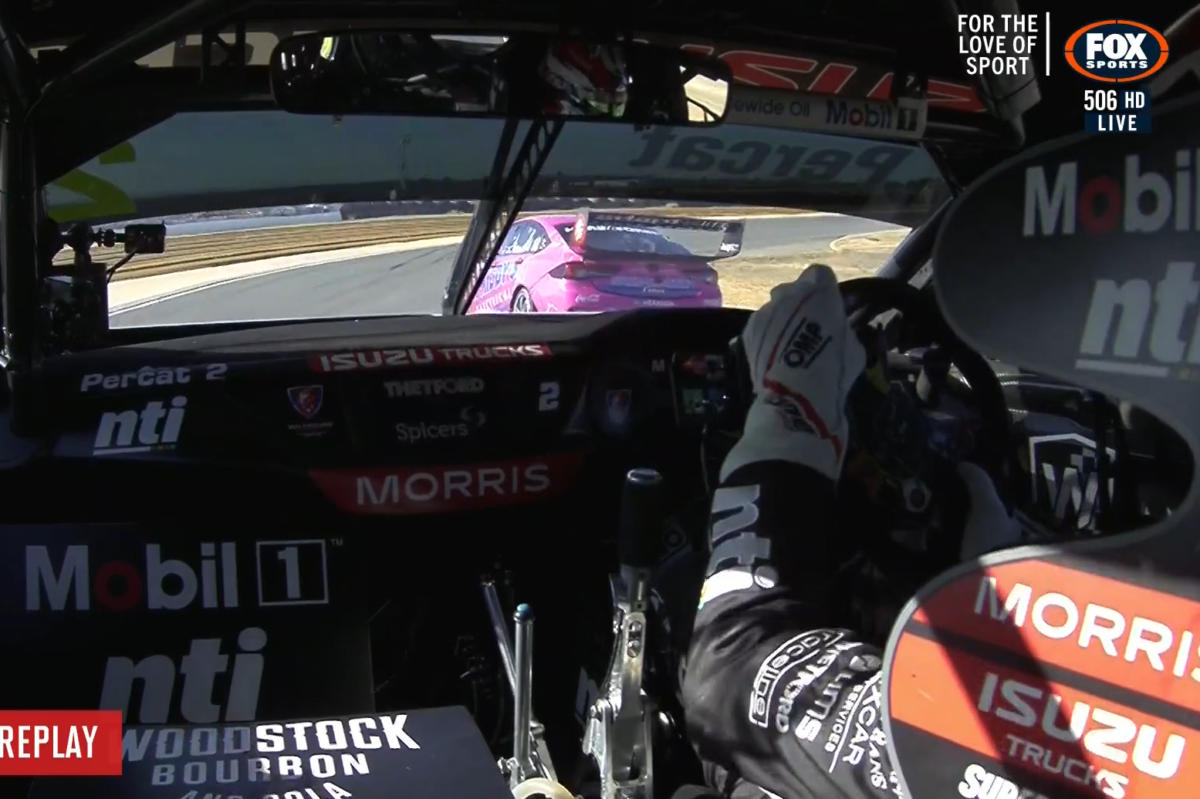 Percat had been following a weaving Fullwood. Picture: Fox Sports