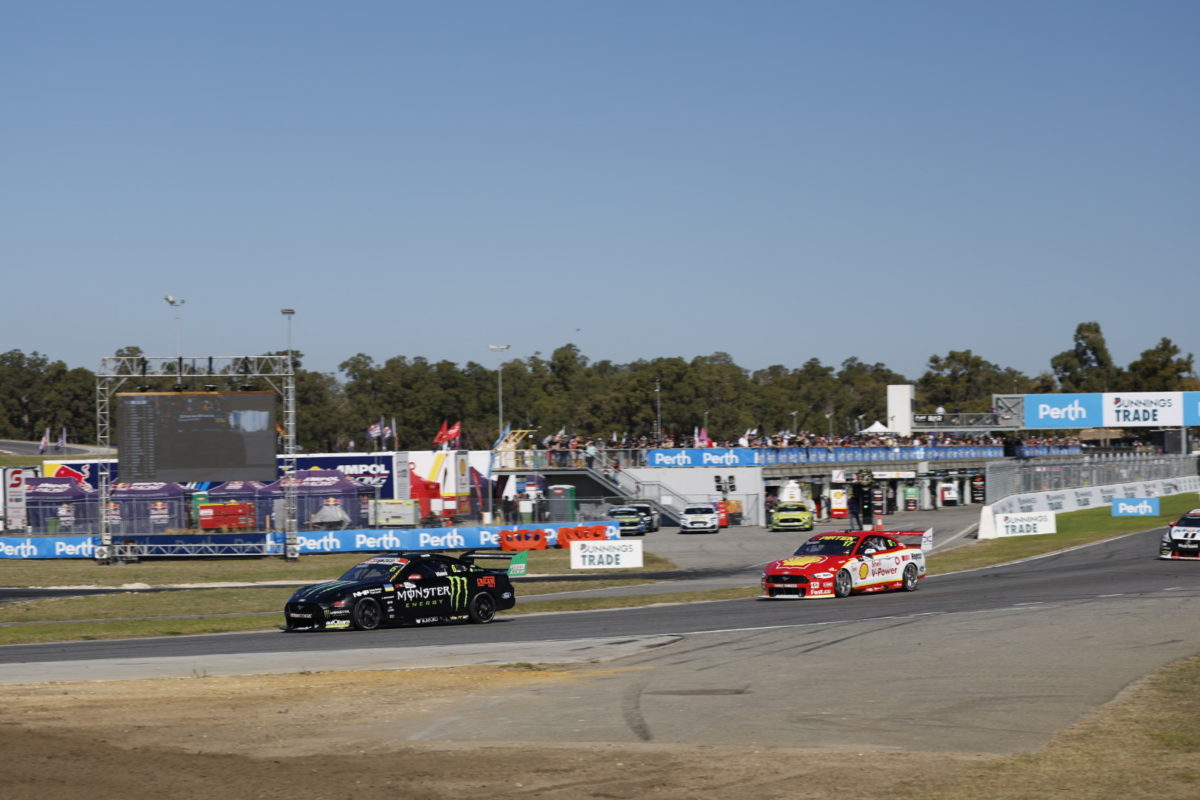 Cameron Waters led Will Davison to the chequered flag

Will Davison has officially won Race 11 of the Supercars Championship at Wanneroo after Cameron Waters lost the lead he took to the chequered flag due to a time penalty.

The Tickford Racing driver crossed the finish line 1.4091s up on Davison but controversially had five seconds added to his race time for an ‘unsafe re-entry’, which occurred during their battle for the effective race lead.

Waters had a fight on his hands to stay in front of the #17 Shell V-Power Racing Team entry as his tyres came up to temperature on Lap 26, straight after his compulsory pit stop, when Davison lunged at Turn 7.

They made side-to-side contact through the corner but Car #6 emerged still in front after Waters ran around the back side of the big exit kerb, prompting a furious radio transmission from Davison back to his team.

Minutes later, the penalty was issued, at which point the #6 Monster Energy Mustang was only 0.7s to the good.

Waters got his lead up to 1.7s, before his hopes of victory were all but dashed by a Lap 37 Safety Car.

In the end, it was a Dick Johnson Racing one-two with Anton De Pasquale following Davison across the finish line at 2.1s behind.

Brad Jones Racing’s Andre Heimgartner is classified third in the #8 R&J Batteries ZB Commodore, with the five bonus points for the fastest lap, after a four-tyre pit stop paid off.

Waters’ penalty put him back to fourth all-told, with Shane van Gisbergen salvaging fifth from outside the top 10 on the starting grid.

The Red Bull Ampol Racing driver’s lead in the Repco Supercars Championship standings is a slightly reduced 139 points over De Pasquale, with one more race to come this afternoon at the Bunnings Trade Perth SuperNight.

Davison (#17 Mustang) had qualified on pole position but Waters (#6 Mustang) got the jump from the outside of the front row and was able to cover the inside line as they arrived at the first corner.

The front-runners had only just started Lap 2 when a Safety Car was called due to a big crash for Scott Pye (#20 Nulon ZB Commodore) after he had tangled with Jack Le Brocq (#34 Truck Assist ZB Commodore) exiting Turn 7.

The Safety Car was upgraded to a red flag on Lap 3, at around 12:11 local time, due to the need to repair the gate in the pit wall which the Pye car had damaged.

The Safety Car led them back out of pit lane at 13:05 local time for almost two full laps around Wanneroo, before a restart came on Lap 6.

Waters negotiated it well and would be a full second clear of Davison when he reset the fastest lap on Lap 11, as the field settled into a rhythm.

Even van Gisbergen continued to circulate in 12th position until he was given the blinker by team-mate Feeney to signal he would be allowed to overtake as they arrived under brakes at Turn 7 on Lap 17.

Waters’ lead was hovering around two seconds when Brown became the first of the front-runners to pit, on Lap 20, and several more would follow over the next few laps.

Davison was about 1.8s back from Waters when he stopped for new working side tyres on Lap 24, and a tidy, 2.8s service put big pressure on the Ford team next door to Dick Johnson Racing.

Waters filed into the lane a lap later, also for working side tyres, and he got out just ahead of Car #17 for the run up the hill.

That was what set up the moment which decided the race, when Davison went for a divebomb as they next arrived at Turn 7, and Tickford would be the aggrieved party in the end.

Waters’ advantage over the #17 Mustang was 1.3s and climbing at the completion of the pit stop cycle, and 1.7s when Brown came to a halt on the motorbike chicane next to Turn 2/Turn 3.

That triggered a Safety Car to recover the #9 ZB Commodore, compressing the field for what would be a seven-lap run home.

At that point, behind Waters and Davison were Brodie Kostecki, De Pasquale, Jake Kostecki, Courtney, and Heimgartner in seventh, the latter of whom went against the grain by taking for fresh tyres in his stop and had already achieved a new fastest lap.

A restart came on Lap 40 and while Waters quickly skipped away from Davison, he could not gap him by nearly enough to take back the effective race lead.

De Pasquale picked off Brodie Kostecki on Lap 43 at Turn 1, which would make for the DJR one-two, then Heimgartner also got under the Erebus Motorsport entry at Turn 6 on the same lap.

In the end, Heimgartner finished less than half a second behind De Pasquale, with van Gisbergen eventually also passing Brodie Kostecki to take fifth.

Car #99 was thus sixth at the finish and Courtney ended up seventh, ahead of Feeney, Jake Kostecki, Hazelwood, Reynolds, and Mostert.