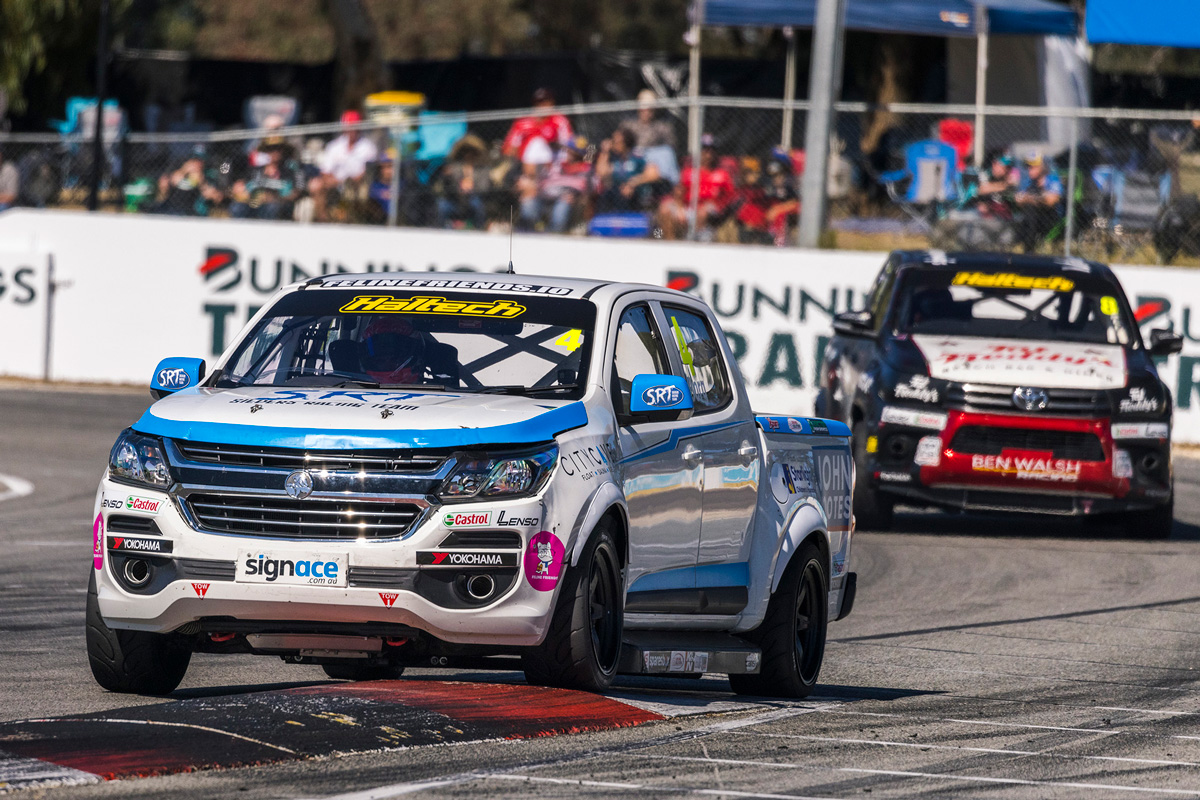 Haltech V8 SuperUte Series front-runner Aaron Borg has ramped up his title campaign with a sweep of the Sunday races at Wanneroo Raceway.

Two out of four isn’t bad for Sieders Racing Team driver Aaron Borg as he completed Round 2 of the Haltech V8 SuperUtes Series at Wanneroo Raceway with his second victory of the weekend and leaves Western Australia with the title lead.

Borg in the Sieders Racing Team Holden Colorado held his main rival from the third race, Ben Walsh in the Western Sydney Motorsport Toyota Hilux at bay during the opening corners where there was drama in the mid-pack.

Ellexandra Best in the Best Leisure Industries Mitsubishi Triton left the circuit at Turn 2, with front-end damage and a flat front-right tyre, though she was able to return to the race.

Meanwhile, Walsh was able to complete what he couldn’t do in Race 3 and pass Borg, as he started the criss-cross at Turn 7 before sliding down the inside at the opening corner.

Scything his way through the field was former series leader and Western Sydney Motorsport driver Craig Woods, who was up to fifth by the race’s mid-point as he chased Sieders Racing Team’s Harry Gray and Abcor Racing’s Rohan Barry.

This battle heated up at Turn 7 on lap 10 when contact was made between Barry and Gray allowing Woods to take the Ranger. Continuing his charge, Woods passed Barry at Turn 6 to climb to third as Gray also attempted to pass but just failed.

Further drama continued at the front of the field, but it started with Best as she left the circuit at Turn 6 and was beached, forcing the introduction of the safety car. However, just after this incident occurred Borg successfully passed for the lead, setting up Walsh out of Turn 7 and completing the manoeuvre along the front straight.

It was fortuitous as the race was completed under safety car as Borg finished clear of Walsh, Woods, Barry and Gray.

Chris Formosa in the Allgate Racing Ford Ranger and Ryco 24.7 Mitsubishi Triton driver Craig Dontas followed in others to make solid gains through a shortened final race for the weekend at Wanneroo Raceway.

In winning his second race of the weekend, Borg took out the round win and leads the series heading to Winton on May 21-22.

Sieders Racing Team driver Aaron Borg has enhanced his Haltech V8 SuperUtes Series title aspirations by taking victory in the third and penultimate race of the weekend at Wanneroo Raceway.

In an all-Holden Colorado front-row, it was Borg leading through Turn 1 from Go Sunny Solar’s George Gutierrez, as the Western Sydney Motorsport Toyota Hilux duo of Ben Walsh and Craig Woods aimed to move forward.

It didn’t take long as Walsh took second at Turn 7 from Gutierrez and continued his charge towards Borg by setting fastest laps, before it settled down as the race transitioned into a rhythm.

A mover through the pack was Craig Dontas after failing to finish yesterday’s second race due to a spin and collision with David Sieders, work on the Ryco 24.7 Mitsubishi Triton was successful as he progressed seven positions.

Sieders didn’t have the same luck as Dontas as he pitted at the conclusion of the opening lap in his Sieders Racing Team Mitsubishi Triton and failed to return.

Following his maiden race victory yesterday, Gutierrez slowed in his Go Sunny Solar Colorado after being passed by Rohan Barry in the Abcor Racing Toyota Hilux and the Ford Ranger of Harry Gray.

Allgate Racing’s Chris Formosa was another retirement after locking a brake at Turn 7 and getting beached in the sand trap, while Josh Hunter also exited the event as an engine malady dropped him out of contention driving the World’s Best Technology Mitsubishi Triton.

Another to drop out was series leader Woods, as his title rival Borg continued to lead from Walsh, although it closed during the final stanza.

However, Walsh was unable to find a path through leaving Borg to take victory, while behind Barry maintained third from Gray and Dontas in a strong comeback drive.