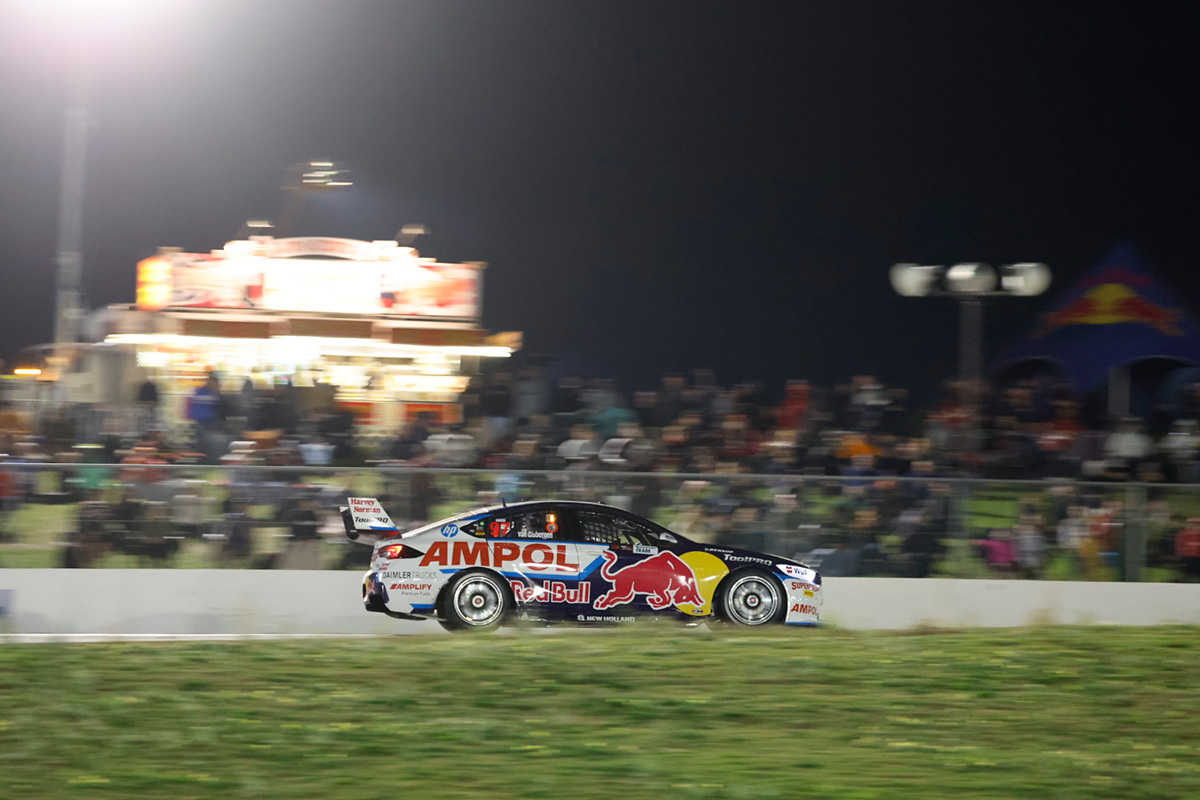 Shane van Gisbergen has played a familiar strategy game to take victory in the opening leg of the Bunnings Trade Perth SuperNight.

While front-row starters Anton De Pasquale and Cameron Waters pitted in succession on Laps 17 and 18, the latter coming in first for an attempt at the undercut, van Gisbergen ran long.

It wasn’t until Lap 32 of 46 that the #97 Red Bull Ampol Racing Holden peeled off into pit lane, remarkable tyre life helping van Gisbergen still emerge from the pits right on the bumper of Waters’ #6 Monster Energy Mustang.

At that point, De Pasquale held a 2.6s advantage to van Gisbergen, with Waters in between.

Van Gisbergen passed Waters on Lap 34, their mini-battle allowing De Pasquale to stretch his margin ever so slightly.

But lap after lap, van Gisbergen reeled in the #11 Shell V-Power Racing Team driver to the point where he was launching an attack through the back half of Lap 42.

De Pasquale got his elbows out in defence, but by running a fraction deep into Turn 1, the door was ajar for van Gisbergen to muscle his way through and go on to claim his maiden race win at Wanneroo Raceway.

The gap at the flag was 2.3077s, with Waters maintaining third to take his second podium of the season.

“I just have to thank the team, it’s so awesome to drive a good car here,” said van Gisbergen.

“I enjoyed myself. Great to be back here, it’s awesome to see the hill packed. Great to finally come back and race here; haven’t had the best run but I always enjoy this event.

“Stoked to get a win but we’ll have another go tomorrow.”

David Reynolds continued his strong form with fourth place, ahead of Broc Feeney who pulled off a series of passes in the second stint.

Will Davison recovered to sixth having started 12th, and despite a bumpy outlap where he dropped spots to Andre Heimgartner, James Courtney, and Feeney.

Courtney finished seventh on a solid night for Tickford Racing, with Brodie Kostecki, Todd Hazelwood and Heimgartner rounding out the 10.

Erebus Motorsport had a tough night in the pits, Kostecki hindered by a slow change on the left-rear tyre, while Will Brown came home 17th having caught his crew by surprise when he seemingly called himself in on Lap 14.

Lee Holdsworth was the big mover of the night, gaining 13 places to finish 11th having run a near-identical strategy to van Gisbergen.

Fullwood was the only non-finisher, a transaxle issue ending his night.

With an additional five points secured thanks to recording the fastest lap of the race, van Gisbergen now leads by 157 points over De Pasquale, with Davison snatching third overall back from Mostert.