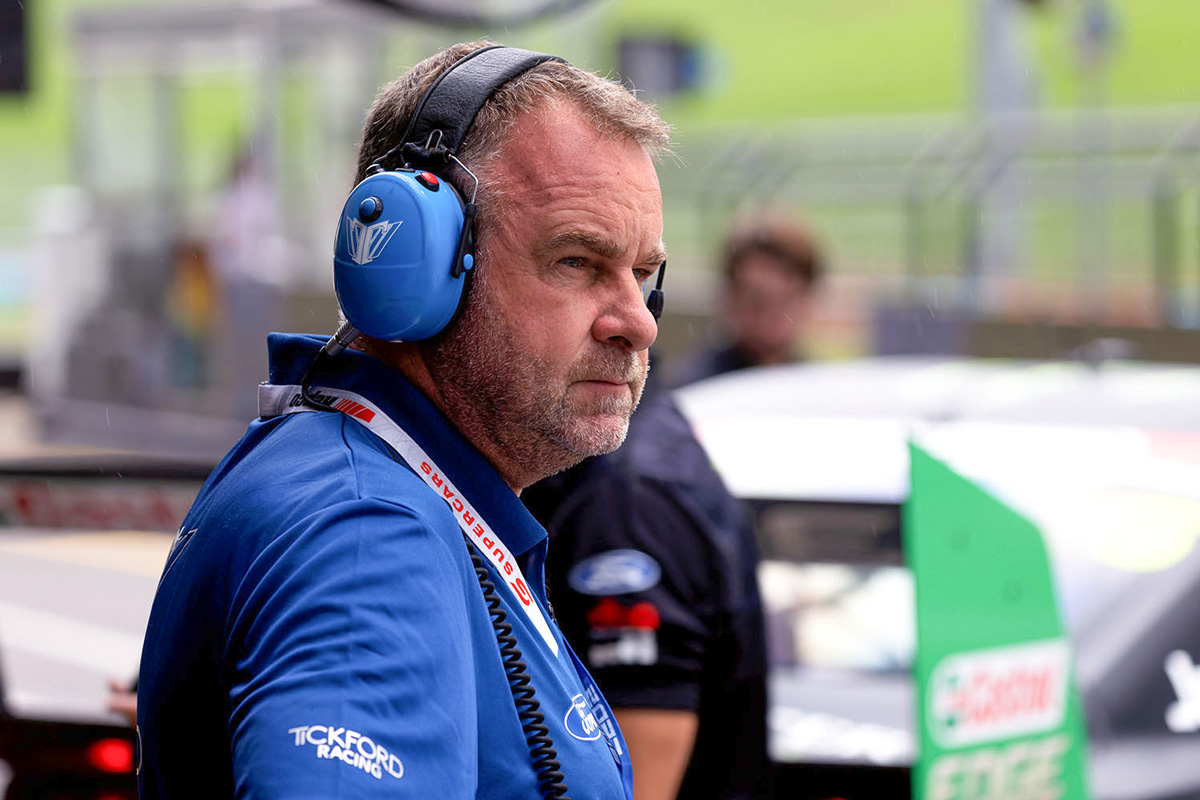 Tickford Racing CEO Tim Edwards insists his team holds no concerns about falling back into the clutches of fellow Ford operations Grove Racing and the Blanchard Racing Team.

Rather, they remain wholly fixated on reeling in Shane van Gisbergen, who has again established himself as the driver to beat in the Repco Supercars Championship.

After a purple patch through 2013-15 when it won a championship and two Bathurst 1000s, Tickford has generally played second fiddle to the likes of Triple Eight Race Engineering and Dick Johnson Racing ever since.

The pointy end of the field has seemed even further away at times this year, with its lead driver Cameron Waters buried down in seventh overall.

That puts him just ahead of Tim Slade (BRT) and David Reynolds (Grove Racing), who are eighth and ninth respectively in a battle pack separated by a mere eight points.

Grove Racing has already racked up five podiums this season to Tickford’s one, despite the latter fielding twice as many Ford Mustangs.

But Edwards is adamant that the numbers don’t tell the full story.

“I mean, there’s one guy [van Gisbergen] who is a standout that’s got the legs on the rest of the field,” he told Speedcafe.com.

“I think our pace is there or thereabouts, but just various things [have held us back], whether it’s us running into people, other people running into us, mechanical issues.

“Some you can influence, some you can’t – particularly the on-track stuff if you’re coming together with people, it’s just life.”

Waters was twice penalised during the Melbourne 400, copping a drive-through for tangling with Will Davison in Race 7 and losing fourth place in Race 9 due to an unsafe release in pit lane. Team-mate James Courtney meanwhile was one corner away from a Race 7 podium when he was spun by Chaz Mostert.

Elements within the team’s control which it is striving to better include car speed and reliability.

But their place in the Ford pecking order is not a worry.

“We’re not focusing on that at all,” Edwards declared.

“The others have just benefited more, from my point of view, from our own misfortune, whether it’s mechanicals or set-up decisions or whatever it is.

“I think we have got the ability to be beating those blokes, so they’re not our focus at all.”

The Bunnings Trade Perth SuperNight this weekend represents Round 4 of the 2022 season and comprises of three 46-lap races.