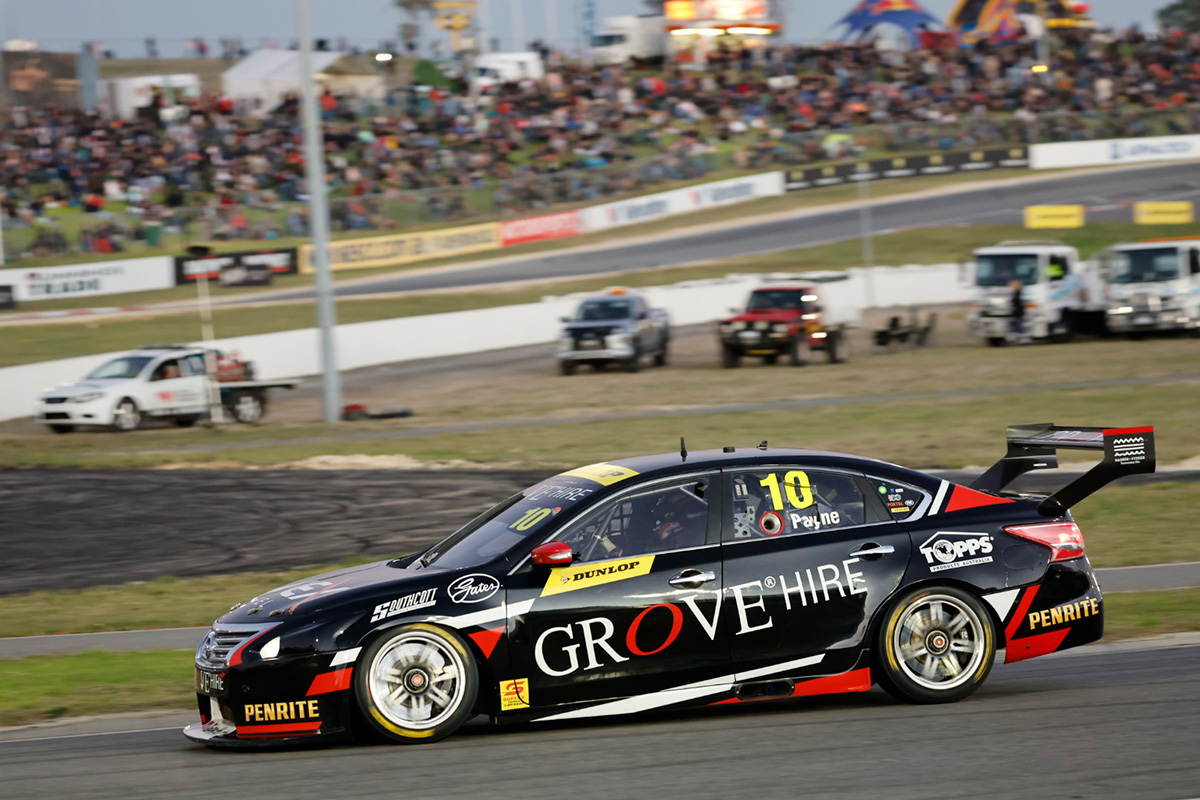 Matt Payne has charged into the lead of the Dunlop Super2 Series with his maiden race win as Zak Best’s title hopes took a spectacular hit at Wanneroo Raceway.

Grove Racing protege Payne started on pole and only just staved off a challenge from Jaylyn Robotham into the first corner.

As Payne cruised off into the distance, Robotham’s race took a turn for the worse, tumbling down the order to be seventh by Lap 4.

Along the way, the Image Racing young gun was also caught up in a second-lap incident with Aaron Seton.

The latter had gotten loose through Turn 7, with contact from Robotham helping him fully loop around. Robotham was subsequently handed a 15-second time penalty.

The front end of the field soon settled with Payne leading Cameron Hill and Matt McLean, who became under pressure from Tyler Everingham.

There was plenty of action in the mid-pack though as Super3 teen Kai Allen mixed it with Super2 competitors including Ryal Harris in an impressive display.

The race sprung to life on Lap 14 when there was inter-class contact between another two cars, as pre-event Super2 leader Zak Best tangled with the lapped Super3 entry of Steven Page on the run to Turn 6.

Best’s #78 Falcon was sent into the left-side wall and out of the race, leaving his Tickford Racing team boss Tim Edwards far from impressed.

“Maybe he should stick to selling caravans because clearly he can’t race a car,” Edwards said of Page.

“Pretty disappointing really; Zak wasn’t having a good run but when you’re lapping a backmarker they really need to be giving way to you.”

Moments before the Safety Car was deployed, Declan Fraser got into the back of Angelo Mouzouris at Turn 1 before giving fifth position back to the MW Motorsport Nissan driver.

Everingham had also got by McLean for the final podium position, as the Safety Car led the field until a Lap 20 restart.

With the pressure back on the race leader, Hill looked to get some overlap but Payne was up to the task, timing his acceleration well to retain the lead.

By the time he got out of Turn 1, he was unchallenged to the flag as mayhem again broke out behind.

Jay Hanson was forced to retire from the race after contact between himself and Matt Chahda fired him into the wall on the climb out of Turn 6, Hanson’s rear wing being detached in the process.

Chahda was cleared of any wrongdoing by the stewards but a 15-second penalty would come the way of Super3 front-runner Brad Vaughan for punting Nash Morris into the Turn 6 gravel trap on the penultimate lap.

Morris had just corners earlier cut across the grass through the esses and bumped with Seton, though both continued.

All told, Payne won with 1.0892s in hand to Hill, with Everingham, McLean, Mouzouris and Fraser completing the top six.

Robotham crossed the line seventh but was demoted to 18th.

Allen was the Super3 class winner in 12th outright.

The Super2/Super3 Series has another 26-lap race in store tomorrow afternoon, with the grid for that encounter to be determined by qualifying from 08:40 AWST/10:40 AEST.