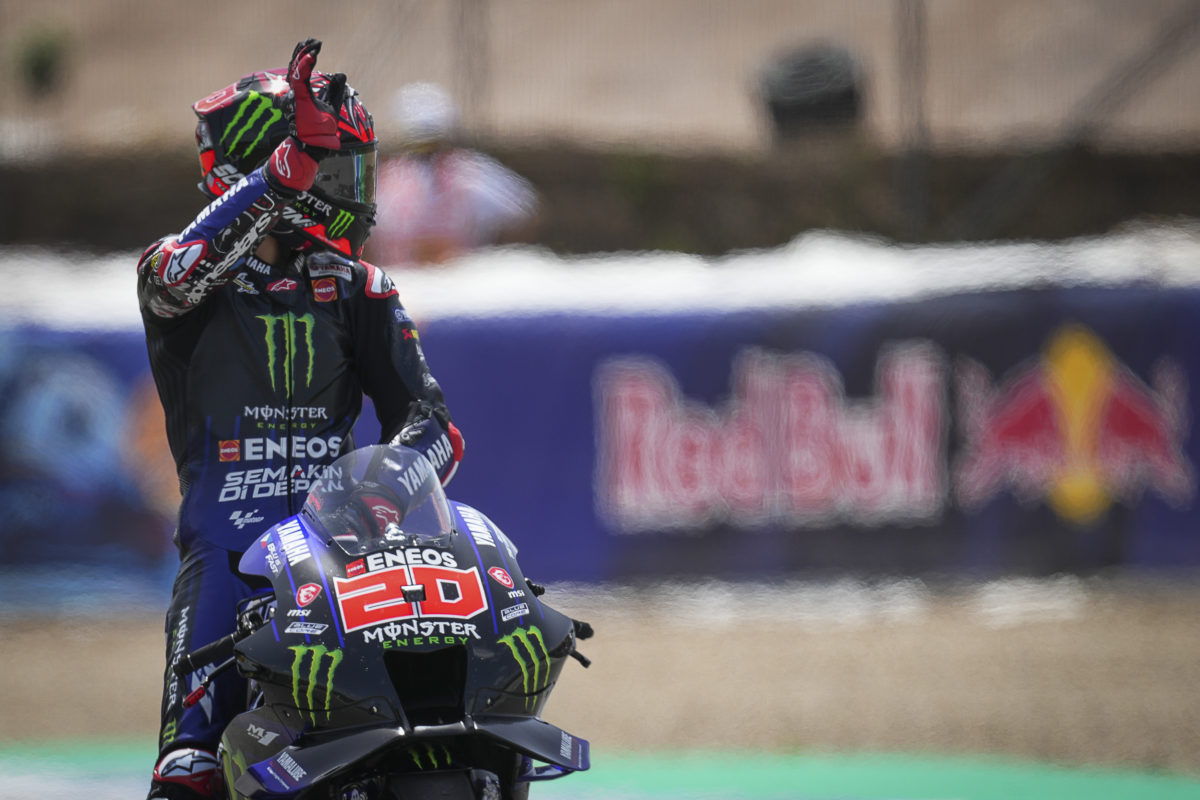 Fabio Quartararo set the pace in Friday practice for the Spanish MotoGP round, but not without a painful incident along the way.

The championship leader had a wild opening session at Jerez, crashing at Turn 13, then nearly crashing again at Turn 9, and later running off at Turn 5.

He regrouped in Free Practice 2 to set the fastest lap time, and therefore top the day, with a 1:37.071s on his Monster Energy Yamaha.

Considering Quartararo had hurt himself in a tender area in his Free Practice 1 crash, his pace was not the only positive to take out of the two sessions.

“It was a tough five minutes after the crash; I couldn’t breathe at one moment,” he laughed.

“Everything is okay now. I can have children normally!”

Quartararo had crashed one a wet patch, one of several left on the circuit after overnight rain, as he went down the inside of Fabio Di Giannantonio.

He was flicked awkwardly from his Yamaha, copping a hit from one of the tyres, but the blow to the ‘crown jewels’ in fact came when he remounted.

“I did it to myself!” explained the Frenchman.

“It was not even the bike. When I jumped on the bike, we’d put something new on top of the fuel tank, and I jumped on it.

“So I feel a little bit stupid! Because I crashed and had nothing, but then when I got the bike and jumped on…

“Maybe it would be better to lie and say that it was the tyre, but I have to say I was stupid.”

Quartararo was more serious in calling for something to be done about the wet patches, should they reappear at the start of Saturday’s proceedings.

Given track evolution, however, he is unsure what can be read into the practice timesheets so far.

“I have not checked the pace yet, but I think the track is changing a lot from Friday to Saturday,” stated the 2021 champion.

“So tomorrow after qualifying, first of all you will see who is in the front three rows and who has the best pace.

“But today it’s impossible to say who will be there. For sure what I see a little bit is [Francesco] Bagnaia, [Joan] Mir, Aleix [Espargaro] had strong pace.

“But I was pretty happy about the first day because usually I’m always feeling strange on the Friday.”

Jack Miller (Ducati Lenovo) was last of those provisionally through to Qualifying 2, in 10th position on a 1:37.762s.

Free Practice 3 starts this evening at 17:55 AEST, with qualifying proceedings kicking off at 22:10 AEST.