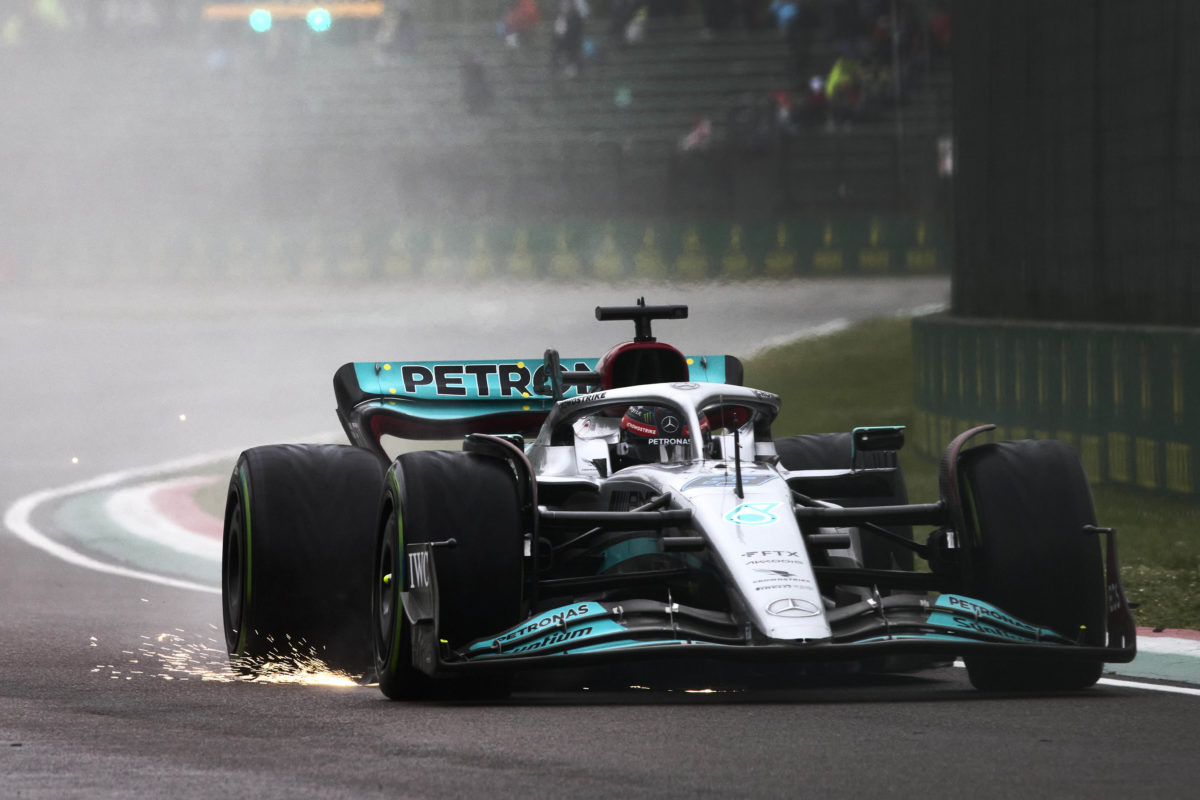 George Russell’s car bottoms out due to porpoising in Imola

The Mercedes Formula 1 team is hoping updates scheduled for the Miami Grand Prix will help address the porpoising issue its W13 has suffered from in 2022.

Having won the last eight constructors’ championships, Mercedes has struggled in comparison this year, with two third place finishes its best result of the campaign.

Porpoising has been identified as a fundamental contributor to the squad’s relative lack of performance, with Lewis Hamilton and George Russell having both battled the phenomena all season.

In Imola last weekend, Russell went so far as to report that it’s having a physical impact on him as the car bounces at high speed.

The issue relates to the aerodynamic philosophy Formula 1 introduced with its latest ruleset, with the airflow under the car now generating the bulk of its downforce.

As cars gain speed, the downforce generated under the car sees it sucked to the ground until the airflow stalls, at which point the downforce is lost and the car rises on its suspension, only for the airflow to reattach and the process repeat.

While for most teams the phenomena, which can’t be simulated in a wind tunnel, is resolved during the braking phase as the car sheds speed, for Mercedes it carries on into the corner.

As a result, the drivers lack confidence while the car is also in a grip-compromised state.

“Problems that are new to us, that we need to get on top of and understand and there is an enormous amount of energy back here going into that, but day by day we are moving forward, we are learning more about it and hopefully, soon, maybe as soon as Miami, we can start to bring some parts to the car that will hopefully give us an indication on whether we are moving in the right direction.

“We are not expecting to solve this overnight, but if we can get a clue that we are going in the right direction, that we really got to the bottom of what is going on, then we will be quite pleased that we are just moving on the right path.”

Team boss Toto Wolff stated over the weekend that, while his team understood the issues it was having, it doesn’t yet have a solution for them.

“It is obviously a bit of a cliché, but the reality is we can’t run the car where we designed it to be run,” Shovlin said.

“Now, that might be true for almost every car on the grid. Lots of people are suffering with this problem and we know that lifting the car is a way of alleviating it.

“A lot of the work that is going on in Brackley has been to understand the phenomenon and whether we can actually control it, whether we can engineer it out of the car and when Toto talks about finding the key what he is really talking about is, is there an aerodynamic solution that we can apply to the car that will make this problem go away.

“Now, being realistic we think this will be something we approach in steps rather than one big moment where the whole thing vanishes, but we are seeing encouraging signs. As I said we are hoping to bring parts to the car soon, maybe even Miami where we can hopefully see progress on this issue.”

For all its woes, Mercedes remains third in the constructors’ championship with 77 points, 36 down on second placed Red Bull and 31 clear of McLaren in fourth.

The Formula 1 Miami Grand Prix, the inaugural running of the event, takes place on May 6-8.