IndyCar has announced major changes to the qualifying format for the Indianapolis 500, which borrows heavily from the road course/street circuit system.

The Fast Nine has been scrapped, with drivers to now graduate to a top 12 and then a Fast Six, just as is the case on the roads and streets.

However, Top 12 Qualifying and the Fast Six will be run in shootout-style, on Sunday, May 22 (local time).

Drivers will still have to complete a four-lap run, as is tradition at the Brickyard, and will do so one-by-one, with the order set from slowest to fastest.

As yet, only 32 entries have been announced for the Indy 500, with the quest to get to the magic number of 33 apparently ongoing.

However, provision has been made for ‘Last Chance Practice’ and ‘Last Chance Qualifying’ to set the 11th and final row of the starting grid, in the unlikely prospect that 34 or more cars are entered in the event.

If that is the case, then the Day One Qualifying session will only lock in positions 13 to 30, with the top 12 and also bottom three finalised on Day Two, that being the Sunday prior to race day.

Under the previous system, which took effect in 2019, the field vied for a berth in the Fast Nine on Day One, with the first three rows and bumping (when necessary) sorted out on Day Two.

“We have an incredibly deep field heading into this year’s Indianapolis 500,” said IndyCar president Jay Frye.

“The timing is right to implement a new and dramatic way to expand one of the most intense weekends on our calendar.

“Winning pole position for the ‘500’ is an incredible feat, and with this new format, it will be even more challenging.”

The top 12 qualifiers will all earn series points, with 12 for the pole-sitter, 11 for the second-fastest driver, and so on.

Each driver is guaranteed an attempt to post a qualifying run in the Top 12 and Fast Six, as well as in Last Chance Qualifying.

In the latter, drivers may opt to make multiple attempts until time expires, with those doing so having their previous time withdrawn.

Practice for the Indianapolis 500 starts on Tuesday, May 17, with the race itself taking place on May 29 (both dates local time). 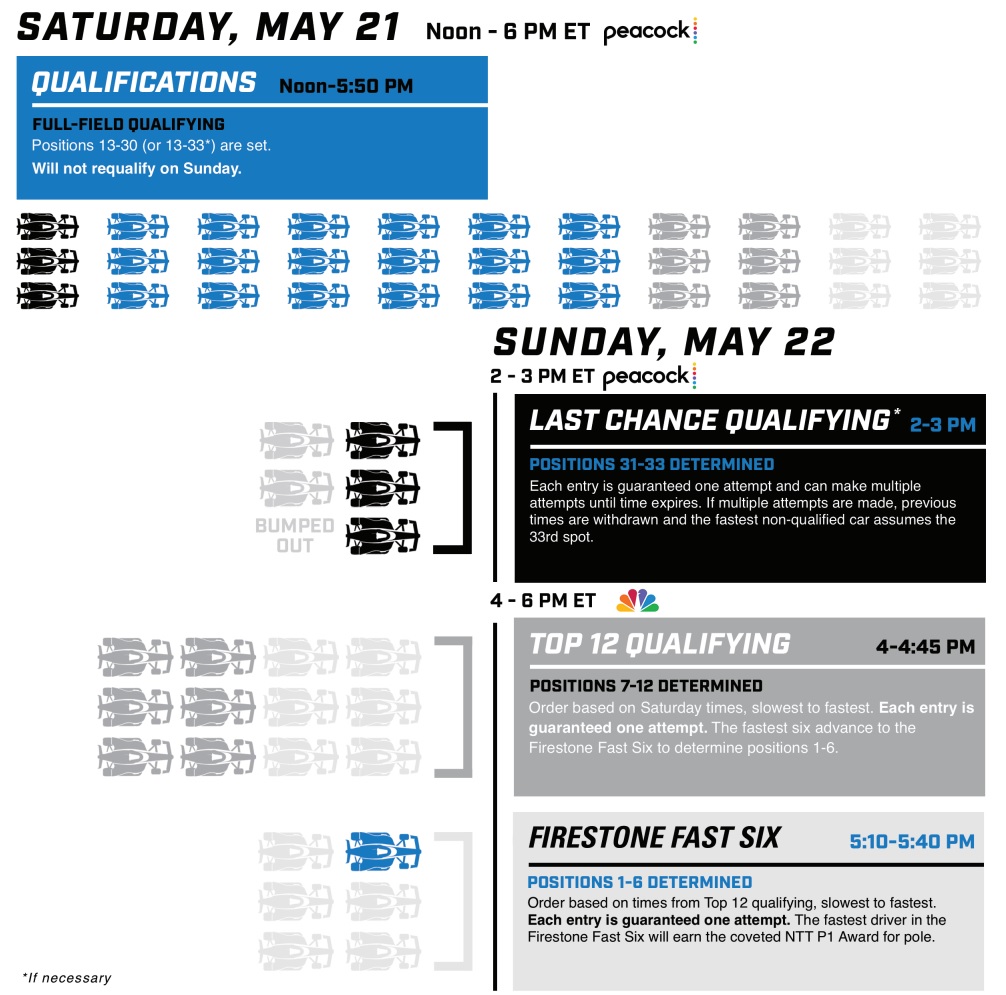 * Next day after local time