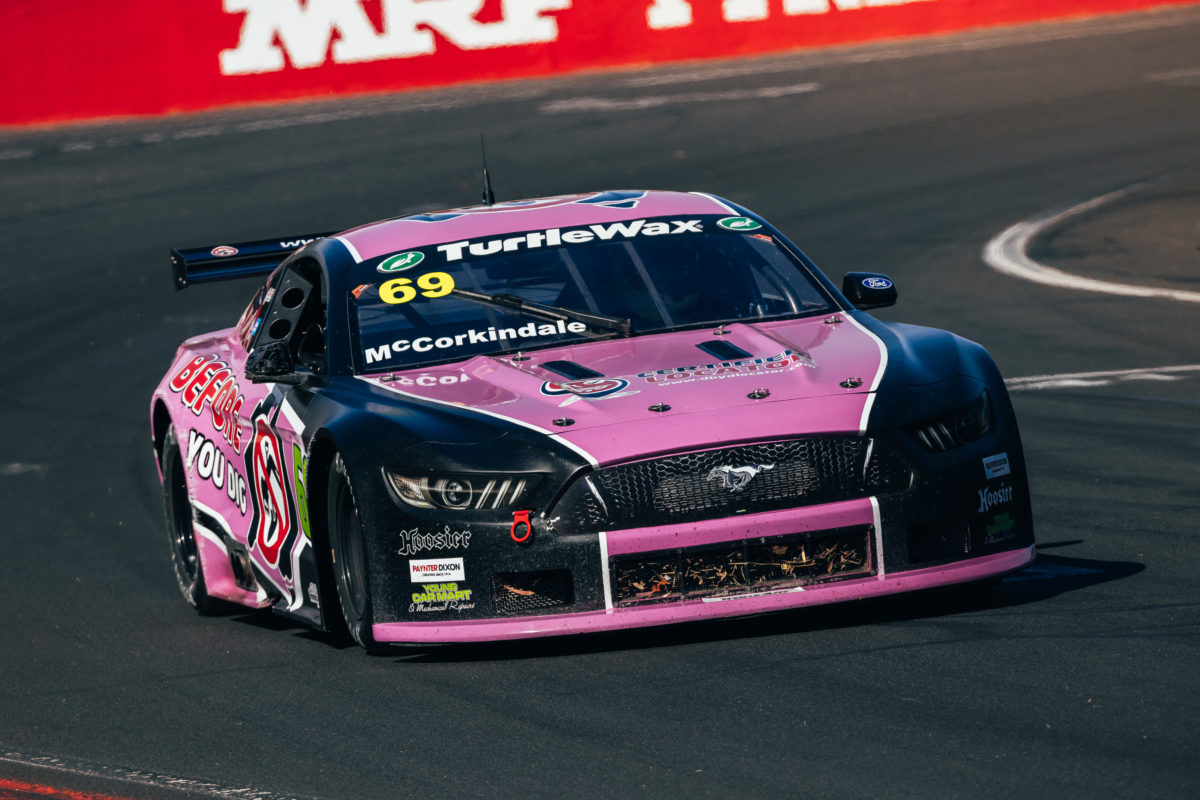 McCorkindale has jumped to sixth in the series standings after results of fifth, fifth, and fourth in the three races which made up Round 3 at Mount Panorama, earlier this month.

The input of one of Walkinshaw Andretti United’s several technical gurus is said to have been a key contributor to that performance.

“We’ve been doing a lot with our shock programme through Adam De Borre, which is really good,” explained the former Super2 driver.

“I think we’ve got a really good shock programme for Bathurst. I think we’re going to get another set built and try to do a test day at Sydney Motorsport Park. If all goes well, I believe we’ll have a really strong car.

“It’s one of those tracks where if you don’t have the car there you can be as good as you want, but you can’t drive around it.

“You just don’t know until you go there.”

McCorkindale finished no higher than seventh in Round 2 at Phillip Island, and not in the top 10 in any race when the Trans Am season kicked off at Symmons Plains in mid-February.

“It’s great to just put it all together,” he remarked.

“All the ideas that we had we’ve needed to adjust and rethink, but we’re finally getting it all to click.

“We’ve been able to get pace, but being able to sustain it is another thing and in that last race was the first time we’ve been getting stronger as the race went on where all the other times, we’ve been weaker.

“It’s basic stuff that we’re doing, but it’s starting to add up.

“It’s starting to get to a point where we are racing against some really good guys that race clean – the only scratch on the car was self-inflicted – so it’s becoming a really enjoyable weekend.

“We’ve got ideas but never trusted ourselves, but now it’s just us and we roll with those ideas.”

McCorkindale’s Trans Am springs are hardly a first for De Borre, in terms of branching out to non-Supercars programmes.

He has been a regular with Audi Sport Customer Racing Australia/Melbourne Performance Centre on its GT3 and TCR programmes, including engineering Mostert for most of his series-winning campaign in the latter last year.

The National Trans Am Series continues at the Sydney round of the Shannons Motorsport Australia Championships on May 27-29.

Among other competitions on the bill at Eastern Creek is the Supercheap Auto TCR Australia Series, which will race under lights for the first time.

Trans Am and Supercheap Auto TCR are part of the SpeedSeries, which is streamed line and ad-free on Stan Sport.