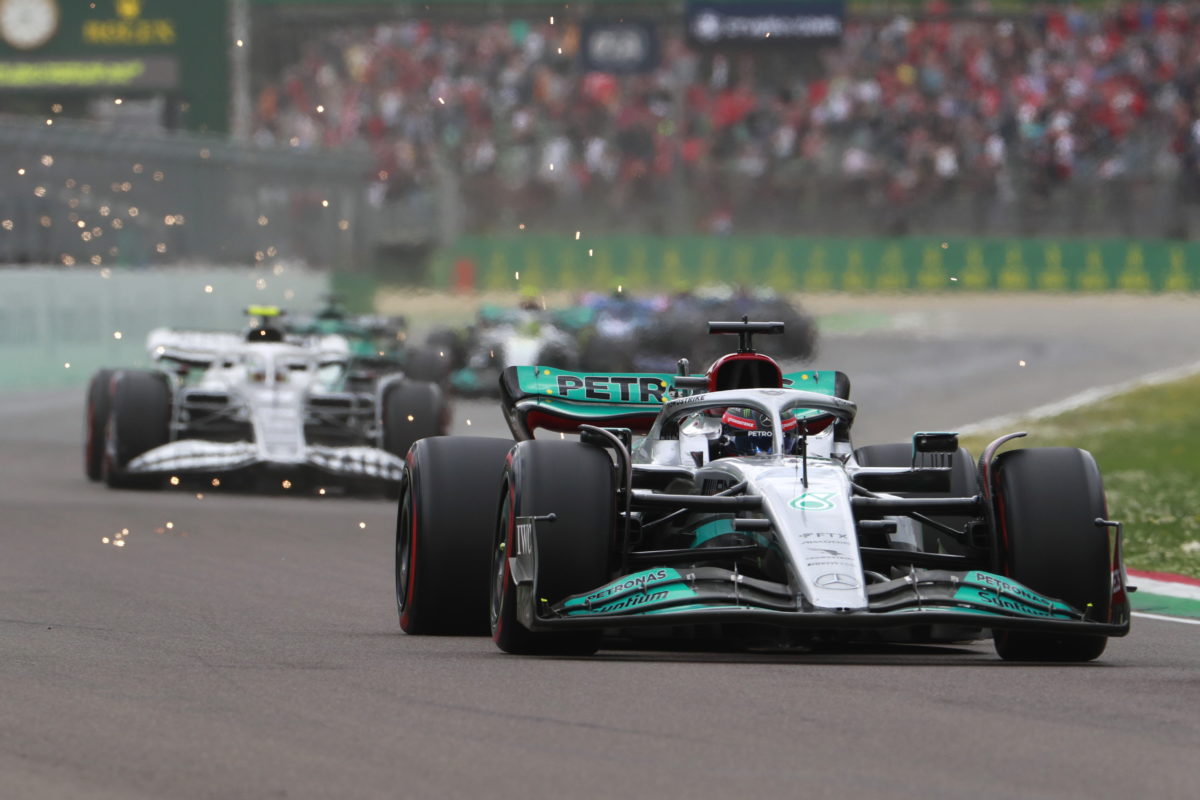 Mercedes boss Toto Wolff isn’t yet willing to concede that the fundamental concept which underpins the team’s 2022 car is flawed.

Having dominated Formula 1 under its previous era, the squad has struggled by its own lofty expectations throughout the opening four races of the year.

That saw the team fail to have either car qualifying inside the top 10 for the Emilia Romagna Grand Prix, the first time that has happened in a decade.

George Russell was able to put in a strong drive on Sunday to rise to fourth at the flag, helped by a late error from Charles Leclerc, while Lewis Hamilton found himself 13th after being stuck in a DRS train behind Pierre Gasly.

Mercedes has struggled to get on top of porpoising, aerodynamic bouncing which robs the car of grip and the drivers of confidence.

While not the only team affected by the phenomena, the W13 does appear to be the most impacted.

What is most alarming however is that there is seemingly no solution on the horizon leaving Hamilton to effectively rule out any hope of victory in this year’s world championship.

It’s an opinion seemingly shared by Wolff, who suggested the team’s hopes of the title were just 20 percent.

Now 47 points down on Ferrari in the constructors’ championship, those odds have only lengthened.

One theory regarding the team’s struggles relates to its minimalistic sidepod design, which leaves a large part of the floor unsupported.

It follows that the floor is flexing under load, sealing the airflow and triggering the porpoising.

“That is a valid point,” Wolff conceded.

“All of the goodness and badness happens mainly on the floor, as it stands at the moment.

“We have interesting ideas and concepts that we are trying and realise that we are exploring, that have to find its way onto the car, and in the next few races, so we can make a call.”

Mercedes’ sidepod design made waves when it was unveiled during testing, a radical solution which, on the surface, afforded the team greater airflow over the rear of the car.

Whether that is the underlying issue is uncertain, at least nobody is saying as much publicly, and Wolff is reluctant for his squad to abandon the concept regardless.

“There is no such thing as a concept being wrong, but is there a part of what we have done [that] just simply doesn’t work with the regulations, and what is it?

“You don’t need to throw away the goodness, you can keep the goodness, but if there are fundamental areas that don’t allow us to unlock the potential that we believe is in the car, well then obviously we need to cut your losses.”

Even then, Wolff has adopted a conservative approach.

Formula 1 now operates under a cost cap, with teams also limited in terms of the wind tunnel time they have available to them.

The decision to change tack is therefore not a trivial one as at the very least it means development and performance on the car stagnating as a new concept is developed and refined.

At a time when teams have comparatively little understanding of their cars as a result of the new aerodynamic rules, it’s a high-risk approach.

“It would mean you say ‘okay, where’s the baseline?’ Is there a new baseline where we can start upon where we believe that we can unlock more potential,” Wolff said.

“We believe that this is the development direction that we need to take, so it’s quite a tricky exercise.

“Before we take such [a] decision, we need to really continue in the science and continue in finding out what it is, because only then you can actually say ‘okay, cut the losses, switch to next year’ if you understand why you got it wrong, and at the moment we simply don’t, not yet.”

It’s a view shared to some extent by Hamilton, who is impatiently waiting for his team to turn the corner.

“I can’t say whether the car is flawed, the concept is flawed, I’m not an aerodynamicist,” he opined.

“At some stage, we will have a better understanding of whether that is the case or not, or whether we are in the right… Maybe all of a sudden we fix the bouncing and we unlock more potential.

“So it’s difficult to write it off anytime soon because everyone’s continuing to work.

“But hopefully it comes to light soon, one way or another, whichever way it is, and then we can start putting our focus on to the solution, because we haven’t found the solution yet.

“Of course, I want to be fighting for the world championship, but unfortunately that’s not the case.

“We have to accept the reality in which we’re faced with and that’s what we do as racers, we just keep fighting.”