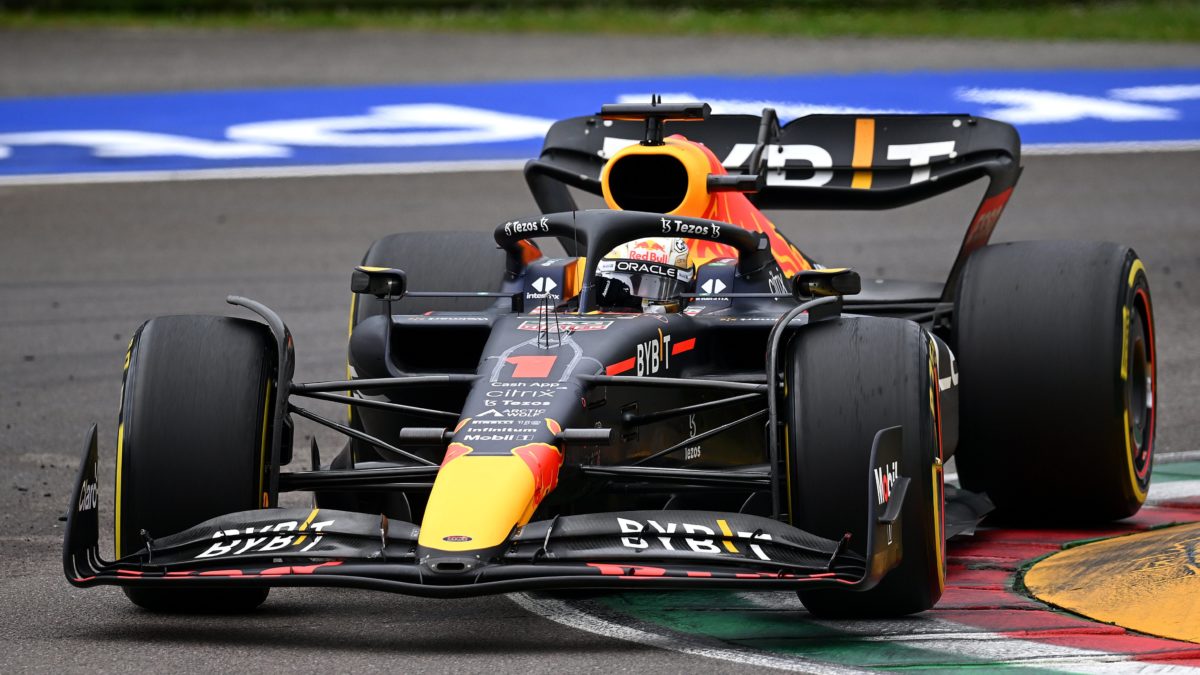 It was a letter perfect performance from the 2021 world champion to head team-mate Sergio Perez, with Lando Norris recording McLaren’s first podium of the season.

An error from Leclerc while pursuing Perez in the latter stages saw him forced to pit for a new wing after tagging the wall, dropping him down the order after what looked like a safe podium result for the Ferrari driver.

Daniel Ricciardo finished last of the 18 finishers after contact with Carlos Sainz on the opening lap, the Spaniard left in the gravel, while Fernando Alonso was the other retirement from the race.

Verstappen lead from the start, Perez charging to second and Norris climbing to third as Leclerc found himself swamped.

Sainz was an early retirement, tangling with Ricciardo at Variante Tamburello, beaching his car in the gravel.

The Australian was able to continue, though he fell to rear of the pack.

Replays showed Ricciardo, on the inside, slid wide on the apex of the left-hander after touching the kerb, pushing his Ferrari rival around.

The Safety Car was deployed without a lap completed, officials noting the incident but opting not to investigate further.

With the race neutralised, McLaren pitted Ricciardo to fit a new set of intermediate tyres to his car.

Racing resumed as they started Lap 5, Verstappen accelerating out of Rivazza with a comfortable lead over team-mate Perez.

Norris held third over Leclerc with Magnussen fifth and George Russell who made a solid start up to sixth.

At the end of the first racing lap, Verstappen held a 1.772s advantage to Perez, with Norris 3.222s away from the race lead.

Damage to Fernando Alonso’s sidepod saw the Spaniard dropping down the order before he took to the lane and retirement, the floor having also been compromised.

The damage came from a spinning Mick Schumacher, who lost the back end of the Haas in Tamburello on the opening lap, his rear wheel impacting the side of the Alpine.

On Lap 8, Leclerc passed Norris, moving to the inside under braking for Tamburello to take third place.

An entertaining battle between Magnussen and Russell developed over fifth, the Mercedes driver getting by into Tamburello on Lap 12 only to skate long.

Bouncing over the kerbs, the Haas driver reclaimed the spot, with Valtteri Bottas closing in on the pair.

The Dane dropped another spot when Bottas moved by under braking into Rivazza next time around, the Haas beginning to struggle for grip.

Ricciardo returned to the pits on Lap 18, swapping on to a set of medium tyres – the first driver to bolt on a set of slicks.

He had strong pace immediately, Vettel, Gasly and Albon all quickly responding. Red Bull too hauled in Perez from second, promoting Leclerc into second.

A lap later, those who hadn’t stopped came in, the entire field having moved on to the dry weather tyre in a chaotic period in pit lane.

There was drama for Hamilton, who had contact with Ocon in the lane, Alpine ultimately handed a five-second penalty for an unsafe release.

In the pit cycle, Leclerc jumped Perez but quickly handed that spot back when the Mexican moved by into Variante Villeneuve.

He was unable to pull away, however, the pair running nose to tail though the Ferrari unable to find a way through.

Perez responded by setting fastest lap of the race, an accolade he swapped with Verstappen for a handful of laps as he inched clear of Leclerc.

A mistake from the Red Bull driver at Variante Alta saw him fall back into the clutches of the championship leader, but not quite close enough to make a move stick under braking into Tamburello.

Ricciardo stopped for a third time on Lap 32, moving on to the hard compound tyres, rejoining in 18th and last but with free air.

On Lap 34, DRS was finally enabled for the first time in the race.

It made little difference with few in DRS range in what had become a processional encounter.

After 40 laps, Verstappen’s lead was more than 12 seconds to Perez, who’d pulled 2.4s clear of Leclerc, with Norris 20.4s further back.

The only battle pack on track was that of Alex Albon, Pierre Gasly, and Hamilton, an inconsequential squabble in the broader context of the race given it was for 12th.

A pass by Yuki Tsunoda broke the deadlock, using DRS to breeze by Magnussen to claim eighth place.

On Lap 50, Leclerc took to the pits, a free stop as he held a 27s advantage over Norris in fourth.

He had a set of soft compound tyres fitted, losing track position to the McLaren as he rejoined the race.

Predictably, Red Bull reacted by pitting Perez to cover off the threat with Verstappen in next time around.

It was a strategic no-brainer as the Dutchman was otherwise exposed should there be a late Safety Car, especially given he had more than enough time to do so and emerged in the lead.

In hot pursuit of Perez in second, Leclerc spun exiting Variante Alta, pitting at the end of the lap after tagging the wall on Lap 54.

That saw Norris promoted to third and Russell to fourth as the nose of the Ferrari was replaced.

He rejoined just as Tsunoda passed Vettel for seventh, the championship leader tumbling to ninth with eight laps remaining.

In the final laps, Russell found himself under pressure from a charging Bottas.

Try as the Finn might, and even with the benefit of DRS, a fully-fledged attack never materialised.

Out front, Verstappen won with ease, 16.5s clear of Perez with Norris rounding out the podium.

Russell held on to fourth over Bottas, Leclerc climbing back to sixth in the final laps ahead of Tsunoda, Vettel, Magnussen, and Stroll.

It was a grand chelem for Verstappen; pole position, fastest lap, and leading every lap of the race. Coupled with Sprint Qualifying, it made for a tally of 34 points for the Dutchman.