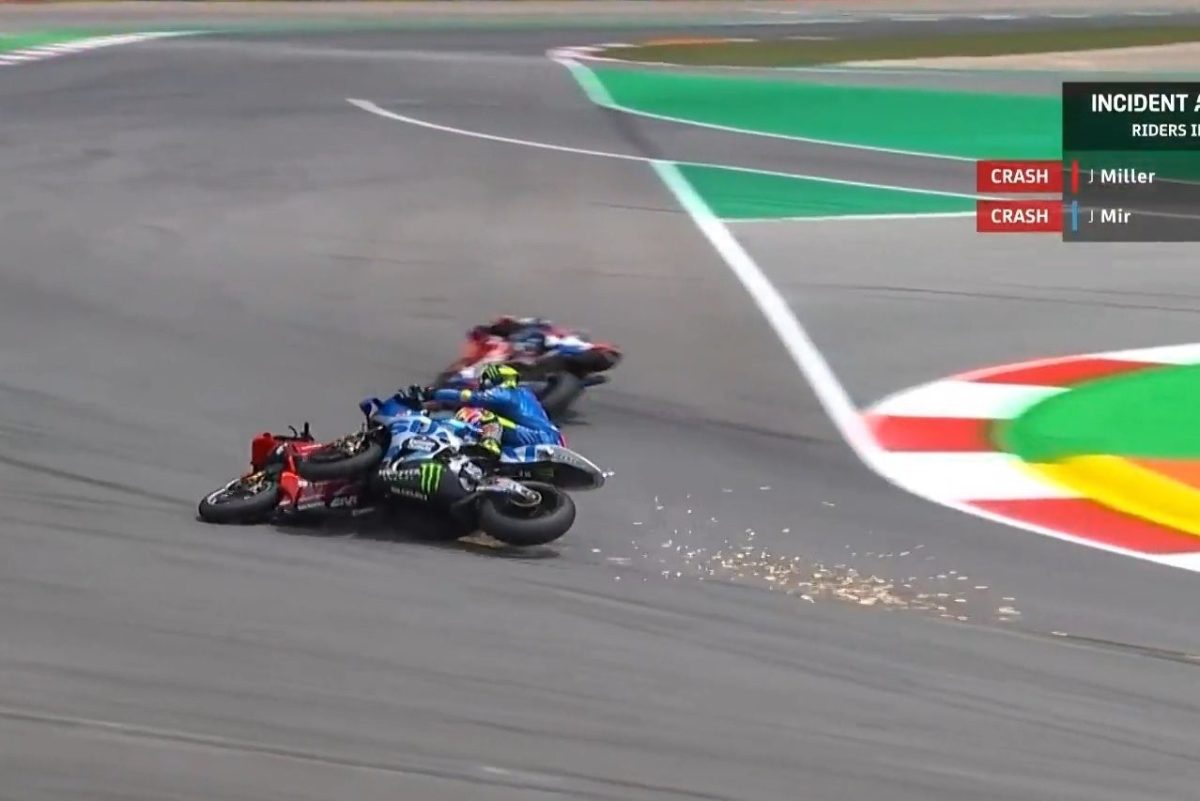 Jack Miller has described his crash while trying to overtake Joan Mir for third in the Portuguese Grand Prix as “a real stinker.”

Miller had held fourth position for much of the fifth race of the MotoGP season when he tried to go down the inside of the #36 Suzuki at the start of Lap 19.

However, he succeeded only in folding the front of his Ducati at Portimao’s first corner, hitting the deck and taking Mir with him.

The Queenslander had been on something of a resurgence, closing in on Mir and fellow Ducati rider Johann Zarco after biding his time for the first half of the 25-lap contest.

Looking back at the incident, he said, “It was one of those things.

“I felt good, the race was going well. I’d conserved the tyres for the first 16 laps.

“I started closing on the guys in front and when Johann Zarco passed Mir I said, ‘Alright, I need to start setting up a pass here.’

“I tried for three laps in a row to get close enough into Turn 1, and it felt like I did, but as I went to pass, I was a fair bit on the inside, I don’t know if I collected one of the damp patches there.

“I went deep, Joan went deep. Joan released [the brakes], I released, and I was just on the shit part of the track trying to stop the bike.

“Crashing out of a race that late in a good position like that is always shitty, and then taking a rival out as well makes it even worse. Feels a real stinker.

“But it is what it is; just try to take the positives. We were in a good position, felt solid all weekend, the pace was there to the end of the race, so not much more to say.”

Miller and Mir have history, including a heated exchange on the cool down lap in the Grand Prix of the Americas in last October.

The Spaniard sarcastically clapped after getting to his feet in the Turn 1 gravel trap, before apparently going to check on the welfare of the Ducati Lenovo Team rider who had just taken him out of the race.

“What happened with Jack was obviously frustrating, but mistakes can happen in racing and I’ve also made similar mistakes in the past,” said the 2020 world champion.

“It was a racing incident and nothing deliberate.

“I was braking quite hard also, then he locked the front.

“It was a shame but again I’ve made this mistake also a couple of times so I hope that he will learn from this and it doesn’t happen again.”

According to Miller, “It’s a shit deal either way, but he took it the best way he could.”

Definitely not the result we were chasing. I was in the wrong 100% today 🤦‍♂️ I’m sorry to Joan, his team and @ducaticorse over the incident. Thankfully we only have to wait a couple of days until we hit the track in Jerez.

Mir is now sixth in the championship at 23 points behind the new, joint leaders in the standings, namely his Suzuki Ecstar team-mate Alex Rins and the man who won the Portimao race on his Monster Energy Yamaha, Fabio Quartararo.

Miller, who has been linked with a possible return to LCR, sits ninth at another 15 points in arrears.

The next event is the Spanish Grand Prix, this coming weekend (April 29-May 1) at Jerez.