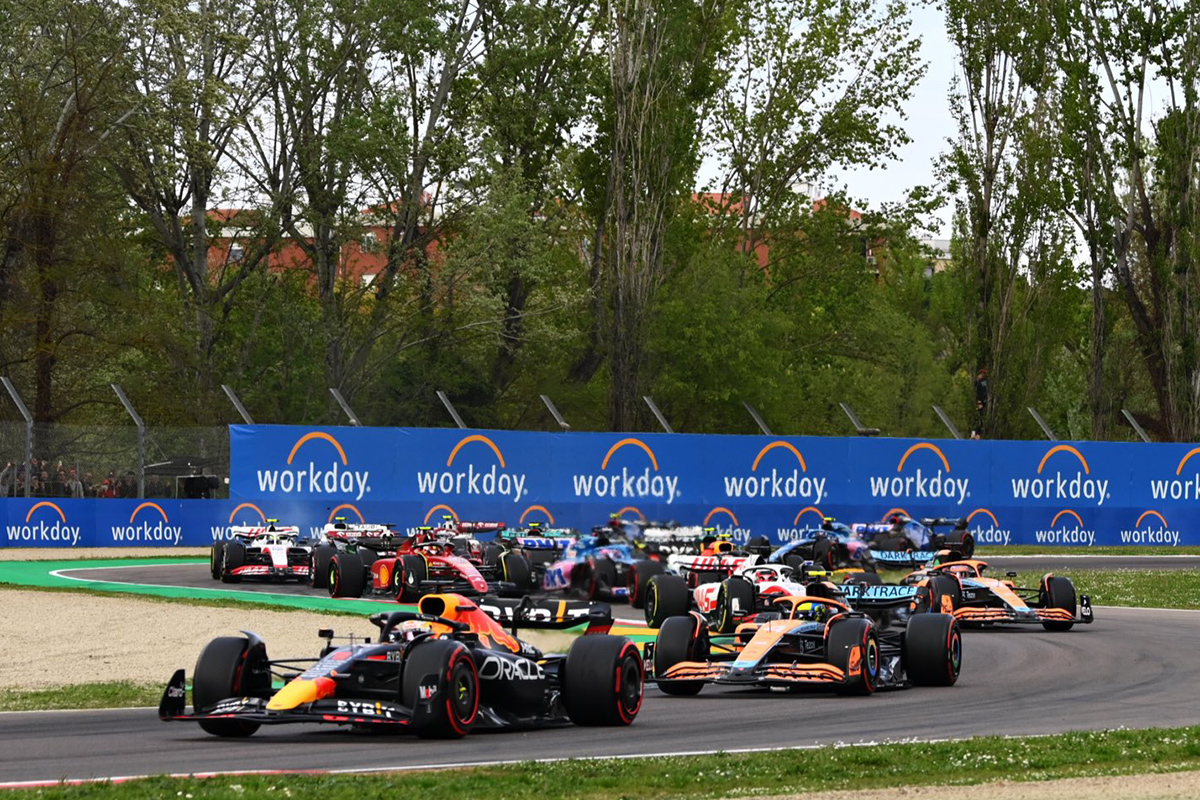 Verstappen fell to second at the start

Max Verstappen will start from first place in the Formula 1 Emilia Romagna Grand Prix after winning out in a battle with Charles Leclerc throughout Sprint Qualifying.

The Dutchman lost out at the start before charging back in the latter stages to seize the lead, taking the chequered flag first to reaffirm himself in pole position – a sport he’d officially claimed on Friday.

Leclerc finished second ahead of a combative drive by Sergio Perez who rose from seventh at the start of the 21-lap encounter.

A strong getaway for Leclerc saw the Ferrari driver seize the lead over Verstappen, then came Lando Norris and Kevin Magnussen.

Daniel Ricciardo lost out to Perez after battling with Magnussen into the Variatne Tamburello, the Australian then having to defend into Tosa from Fernando Alonso.

The Safety Car was called for before the end of the opening lap after Zhou Guanyu and Pierre Gasly made contact at Piratella, spearing the Alfa Romeo Sauber driver off the road and into the wall.

At the end of Lap 4, racing resumed, Leclerc accelerating as he rounded Rivazza to hold a comfortable advantage as he entered Tamburello.

A mistake as he navigated his way through that chicane, Alonso was forced to defend against Carlos Sainz, the two-time world champion holding on to the spot as they entered Variante Villeneuve.

Magnussen was one of just three drivers to have opted for the medium compound tyres, the Dane shown the black and white flag for weaving while defending against Perez early.

Sitting fourth, it was key that the Haas driver remained in contact with those ahead in the hope that their soft compound tyres degraded and swung the advantage back in his favour.

Sainz found his way through on Alonso at Tamburello on Lap 6 to move up to seventh place, scything around the outside of his Alpine rival without needing to rely on DRS to make the move.

Race control enabled DRS next time by, Perez using it to its fullest advantage to pass Magnussen with ease down the front straight.

The Haas driver soon found his mirrors filled by Ricciardo and Sainz as Perez scampered up the road in pursuit of Norris in third.

On Lap 11, Ricciardo made the move on Magnussen to gain a spot while up the road his McLaren team-mate lost one.

Magnussen gave up another spot next time through, the Haas easy prey to Sainz who used DRS to cruise by and claim sixth place.

The Ferrari driver quickly bridged the gap to Ricciardo to claim fifth from the Australian on Lap 15.

Having enjoyed more than a second advantage over Verstappen in the laps after the Safety Car’s withdrawal, Leclerc found himself within DRS range of the Red Bull as they began Lap 16.

The Dutchman was still in DRS race next time by, though was too far back to make a move as they began the next lap.

With three laps to go, Leclerc felt the need to mildly defend into Tamburello, positioning his Ferrari in the middle of the road before easing to the right at the end of the braking zone.

The championship leader was beginning to struggle, Verstappen swarming all over the rear of the leader before taking the place into the first chicane.

He did so with ease, DRS enabling him to draw alongside and nose ahead into the left-hander which opens the lap, leaving just enough room for the Ferrari inside him.

Behind them, Sainz put a move on Norris to move up to fourth, though too far back to make any further impact.

That was how it ended, the chequered flag falling with Verstappen first from Leclerc, then came Perez and Sainz.