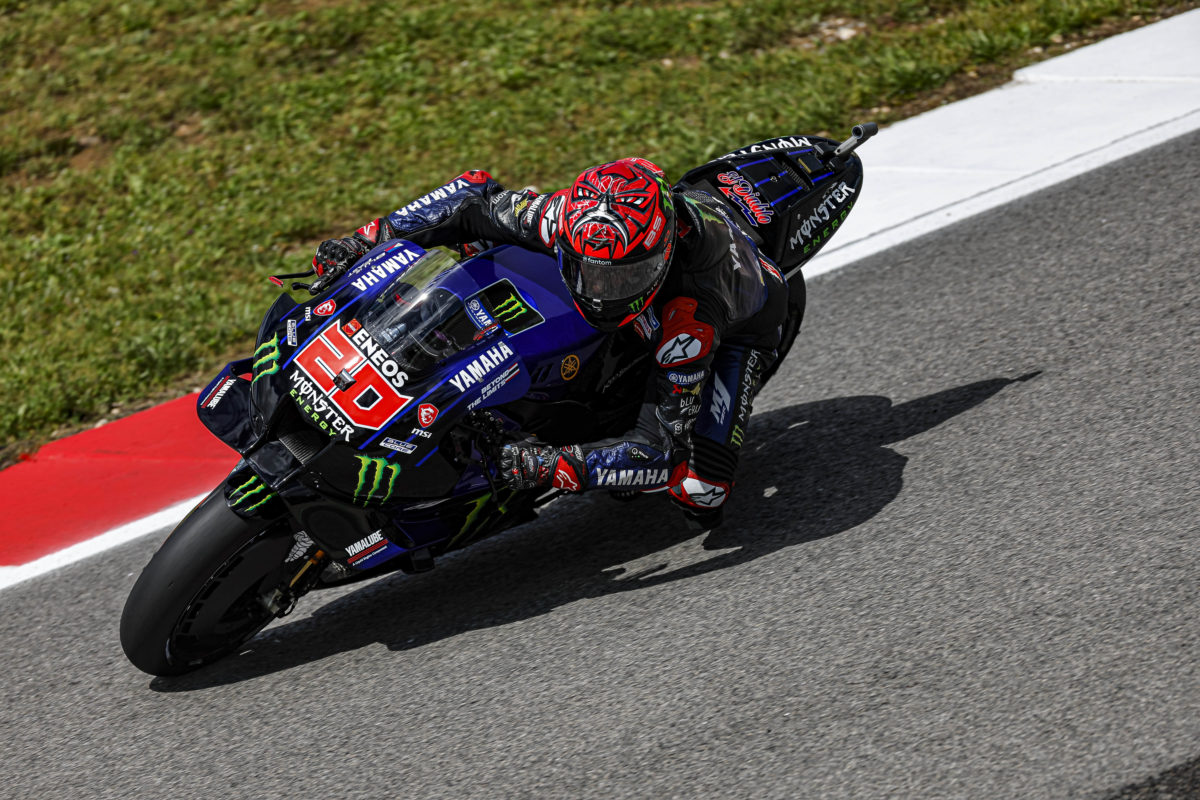 Fabio Quartararo has dominated the Portuguese Grand Prix while Jack Miller crashed and took out Joan Mir in an attempted pass for third place with seven laps remaining.

Monster Energy Yamaha’s Quartararo now holds a share of the MotoGP riders’ championship lead with Alex Rins, who rode his Suzuki Ecstar entry from 23rd on the grid to fourth at the chequered flag after 25 laps around an overcast yet dry Portimao.

Both were beneficiaries of a crash for pre-race points leader Enea Bastianini, who dropped his Gresini Racing Ducati on Lap 10.

In the battle for the minors, Pramac Racing’s Johann Zarco claimed second position by staving off Aprilia Racing’s Aleix Espargaro, who had inherited third spot when Miller wiped out Mir’s Suzuki.

Mir had earlier made a lightning start from the middle of the front row and took a clear lead to the first corner, while Quartararo went down the inside of Zarco’s Ducati at Turn 3 to take up second position.

Alex Marquez (Castrol LCR Honda) rounded up Zarco on the run through Turn 4, but Miller (Ducati Lenovo) dived past both of them at the Turn 5 hairpin.

Zarco regained fourth position from Alex Marquez at Turn 14, and was back into the podium placings on Lap 2 when he went down the inside of Miller at the same corner.

There was a new race leader when Quartararo tucked in behind Mir and then went underneath him at the start of Lap 4, at which point those two were a full second up the road from Zarco.

‘El Diablo’ was then a full second up on Mir by the end of Lap 5, as Zarco chipped away at Mir’s margin and Miller continued to circulate in fourth spot and Alex Marquez in fifth.

A brief but willing stoush broke out for fifth position on Lap 8, with Aleix Espargaro (Aprilia Racing) passing Alex Marquez at Turn 8 and none other than Rins capitalising to also go by the #73 Honda, while Miguel Oliveira (Red Bull KTM) emerged in eighth.

Rins had started second-last, but was already into 10th position when he rounded up Marc Marquez (Repsol Honda) at Turn 15 in an astonishing first lap for #42.

Zarco caught up to Mir on Lap 9, but they were two seconds adrift of 2021 champion Quartararo at that point.

Disaster soon struck for Bastianini, who fell on the way into Turn 8 on Lap 10, while running 11th.

Meanwhile, Mir was holding Zarco at bay, thanks in no small part to being better under brakes as they descended into Turn 1, but the Pramac rider got a run on the #36 Suzuki as they ran down the main straight to commence Lap 16.

No sooner had he taken second place, however, did he give it straight back when he ran well wide at the right-hander which followed, as a resurgent Miller caught up to them.

Zarco made the same pass on Mir a lap later, and consolidated it on that occasion, but was by then staring at a five-second deficit to Quartararo.

On Lap 19, Miller looked to outbrake Mir and take third spot at Turn 1, but he tucked the front and hit the deck, taking the 2020 champion with him. 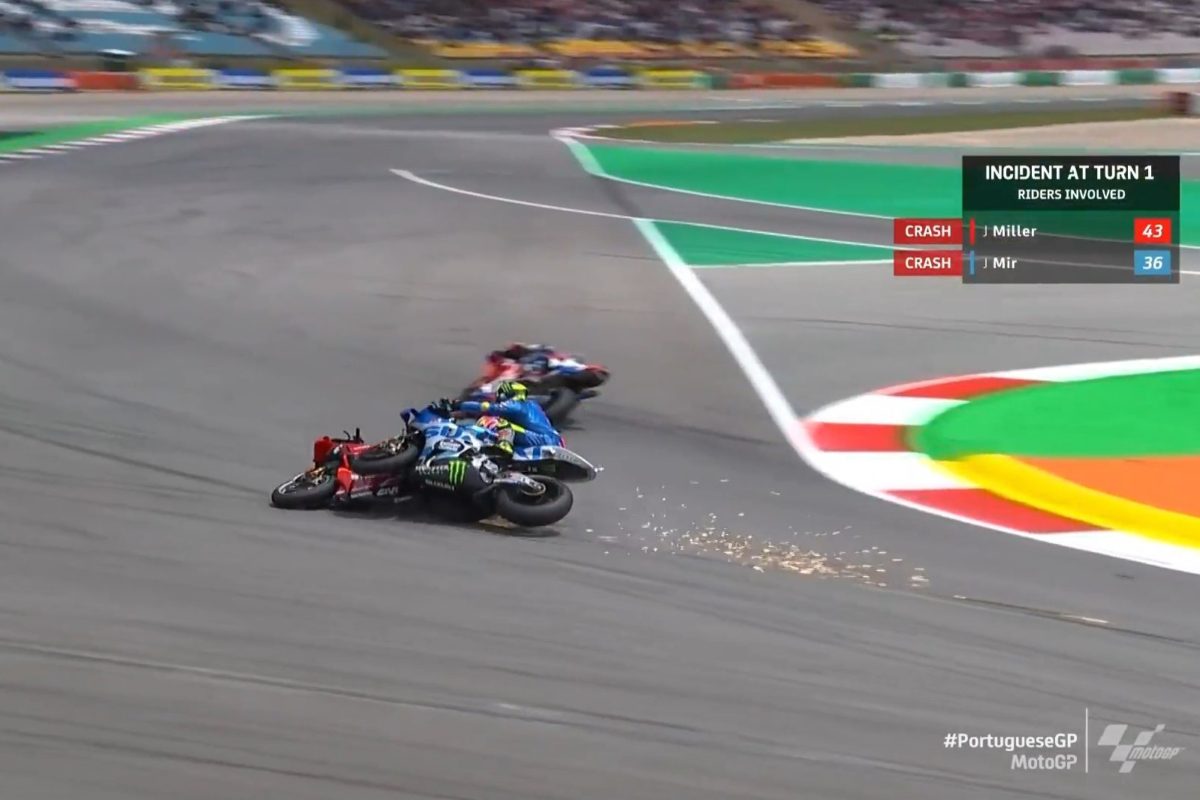 Quartararo had disappeared to a six-second lead with two laps to go, but the minor placings were still in play as Aleix Espargaro tailed Zarco.

The Argentina Grand Prix winner could not find a way through, but he will leave Portimao third in the championship at just three points off top spot.

Quartararo’s official margin of victory was 5.409s over Zarco, with Rins ending up fourth at 3.6s back from Aleix Espargaro, and Oliveira claiming fifth.

For Bagnaia, it was an impressive fightback from last on the grid after a crash in Qualifying 1, having only been given final clearance to race in the hours before the Warm Up.

Aprilia wildcard Lorenzo Savadori came up a lap shy of the chequered flag, and Fabio Di Giannantonio went out late in the piece due to an apparent technical problem for his Gresini Ducati.

Joining them, Miller, Mir, and Bastianini as DNFs were the other two crashers, namely Brad Binder and Pramac Racing’s Jorge Martin.

Both were just outside the top 10 when they had their spills, Martin folding the front of his Ducati on Lap 5 and Binder going down on Lap 18.

Raul Fernandez did not make it to the start, the Tech3 KTM rider declared unfit after his qualifying crash.

The Spanish Grand Prix takes place next weekend (April 29-May 1) at Jerez.