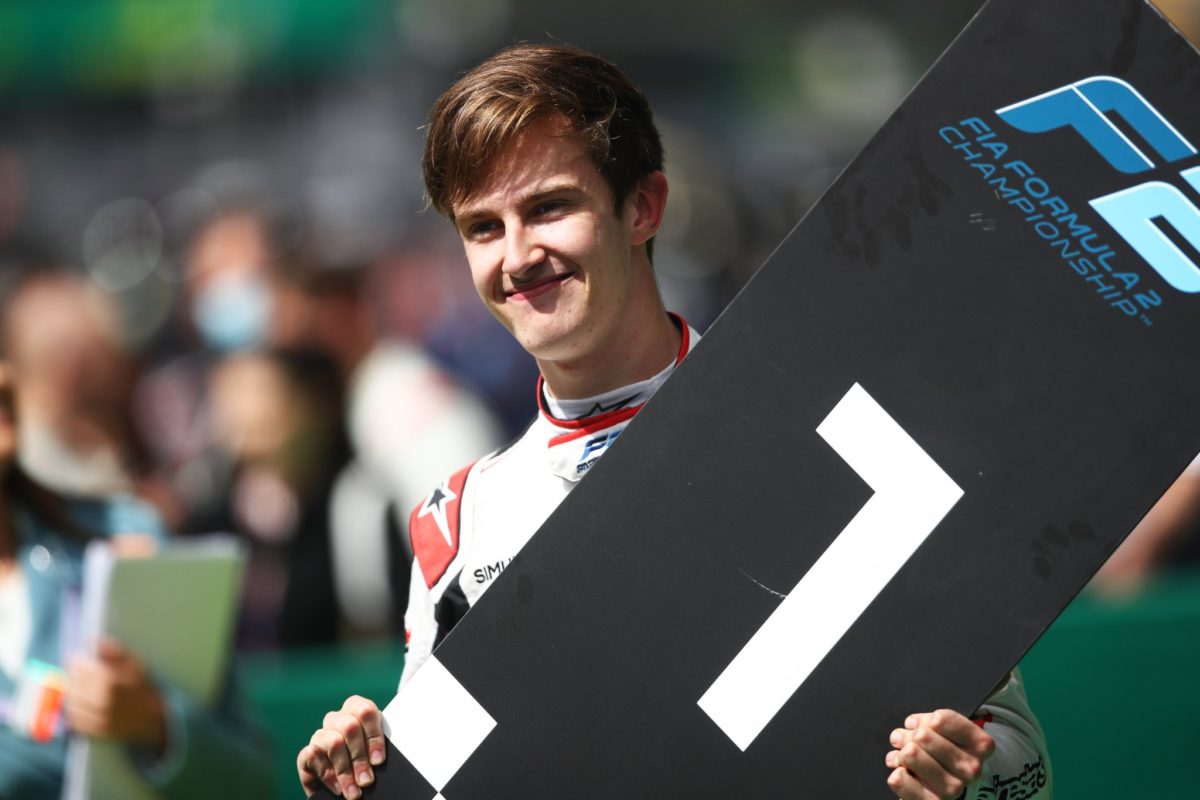 Theo Pourchaire claimed victory in the Formula 2 Feature race in Imola in a race plagued by interruptions as a number of front runners retired.

The Frenchman benefitted from an early Safety Car when Juri Vips retired on Lap 5, affording him a free pit stop.

He then kept a clean pair of heels to inherit the effective race lead after Roy Nissany, who looked set to claim victory, crashed in the closing stages.

Nissany got a lightning start, streaking from sixth to the race lead by the time the field reached Variante Tamburello.

A slow getaway was compounded for Jack Doohan as he was squeezed in the pack, making contact with Dennis Hauger, forcing both out – Hauger having contacted the pit wall while Doohan suffered steering damage.

The Safety Car was deployed to recover the stricken Prema, Nissany holding the field before accelerating late as the field restarted Lap 5.

His shift lasted little more than another lap, running wide exiting Variante Villeneuve to spin across the road and collide with the barrier.

With the Hitech buried in the gravel, the Safety Car was called for the second time.

It afforded those on the soft compound tyres the opportunity for a free pit stop, compromising all those who started on the medium rubber.

Jehan Daruvala inherited the lead from Marcus Armstrong as that process took place, the leaders all yet to stop and set to plummet down the order once they did so.

Daruvala extended a small lead in the laps that followed, moving away from Armstrong to the tune of 2.5 seconds, the Kiwi busy managing countryman Liam Lawson in third.

In the pack, Nissany adopted a conservative approach, knowing the race would come back to him, siting behind Calan Williams in ninth without attacking the Australian.

That was until he crashed exiting the final corner on Lap 20, immediately dragging the car into pit lane with the right front damaged.

He’d simply run wide at Rivazza, bouncing over the kerbing and nosing into the wall, debris scattered across the track and pit entry, which was closed, to draw the Virtual Safety Car.

That promoted Pourchaire into the effective race lead, once those ahead served their compulsory stop.

Racing resumed on Lap 25, Daruvala clear out front to the tune of 4.5 seconds.

Lawson pitted at the end of the lap, as did Jake Hughes and Richard Verschoor, emerging at the back of the pack by some distance.

Daruvala followed suit next time around, covering off the threat posed by the likes of Lawson, whom he rejoined comfortably clear of.

A slow stop for Armstrong on Lap 27 dropped him out in front of Hughes, who quickly found a way through, though both were well down the order and outside the points as a result of the early Safety Car for Vips.

On Lap 31, Logan Sargeant passed Boschung for what was fifth on track, only to make a mistake at Variante Alta and fall back two places in what was a battle for the effective second place.

Enzo Fittipaldi was also involved, gaining from Sargeant’s mistake to then pas Boschung for second before the Virtual Safety Car was deployed, which soon became a full Safety Car.

That was for Liam Lawson, who’d crashed on the run out of Acque Minerali.

It eventually left Pourchaire out front once those yet to stop had taken to the lane, the Frenchman taking the win under Safety Car conditions from Fittipaldi and Boschung.