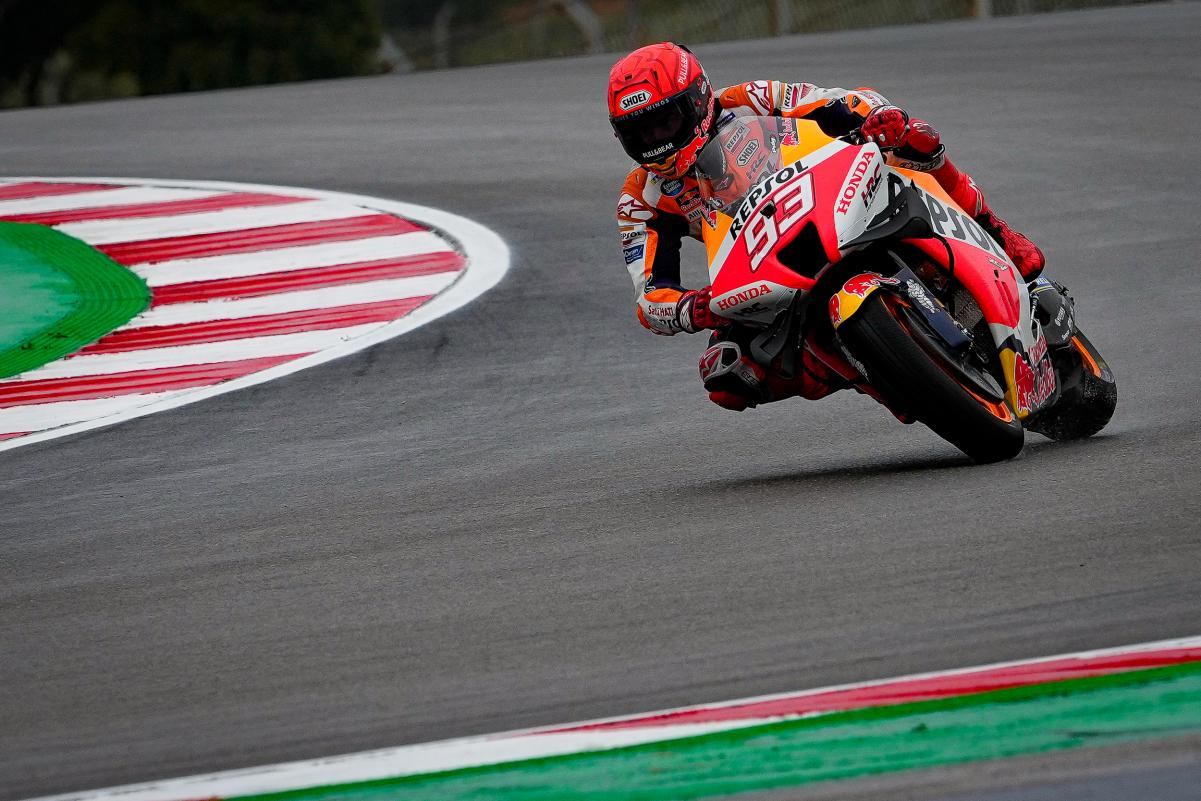 Marc Marquez believes that the relatively minor consequences of his practice crash at the Portuguese MotoGP are a good omen, after his recent bout of double vision.

The six-time premier class champion is only in his second event back after a monster Warm Up highside at the Indonesian Grand Prix kept him out of that race and the Argentina Grand Prix which followed.

He was flung from his Repsol Honda again in tricky, wet-dry conditions in Free Practice 3 at Portimao, breaking the visor on his helmet when he hit his head on the tarmac at Turn 8.

However, there was no repeat of the concussion or diplopia (double vision) which affected him for a second time in the space of five months after his crash at Mandalika in March.

“In a weekend like this one with wet conditions, cold conditions, mixed conditions, it’s easy to make mistakes, like nearly everybody did,” said Marquez.

“But, I didn’t expect to crash there because I was not pushing a lot.

“Of course, when I decided to come back in Austin, the question to my doctor was, ‘If I land again on my head, what’s going on?’

“He said, ‘It doesn’t mean every time you land on your head it [diplopia] will appear. You will have the same risk as in Austin next year.’

“It’s also true that the Indonesian crash was a massive one. Here I landed and hit my head but nothing happened. I have pain on my neck, but that’s normal.”

Marquez’s crash occurred in the 10th minute of FP3, and he reappeared after MotoGP medial director Dr Angel Charte assessed him for signs of concussion.

“Dr Charte came straight to me and asked two or three questions,” said the 29-year-old.

“He said, ‘Where did you crash? Which gear? Which corner?’ and in Indonesia, I didn’t answer. Today I answered straight away.

“It’s true that they are much stricter than before.”

Marquez would go on to qualify ninth, but would have been fourth if his final lap was not cancelled due to the yellow flags triggered by a crash for team-mate Pol Espargaro.

“It’s a bit like Austin; I’m happy with the speed we showed but again we were unlucky,” he said, after riding from last at the first corner to sixth at the finish of the Grand Prix of the Americas a fortnight ago, following a technical problem at the start.

“But, these things can happen; today it impacted my lap time but tomorrow it could affect another rider.”

Race start at Portimao is scheduled for tonight at 22:00 AEST.