Gardner: No regrets over slick tyre gamble despite out lap crash

Gardner: No regrets over slick tyre gamble despite out lap crash 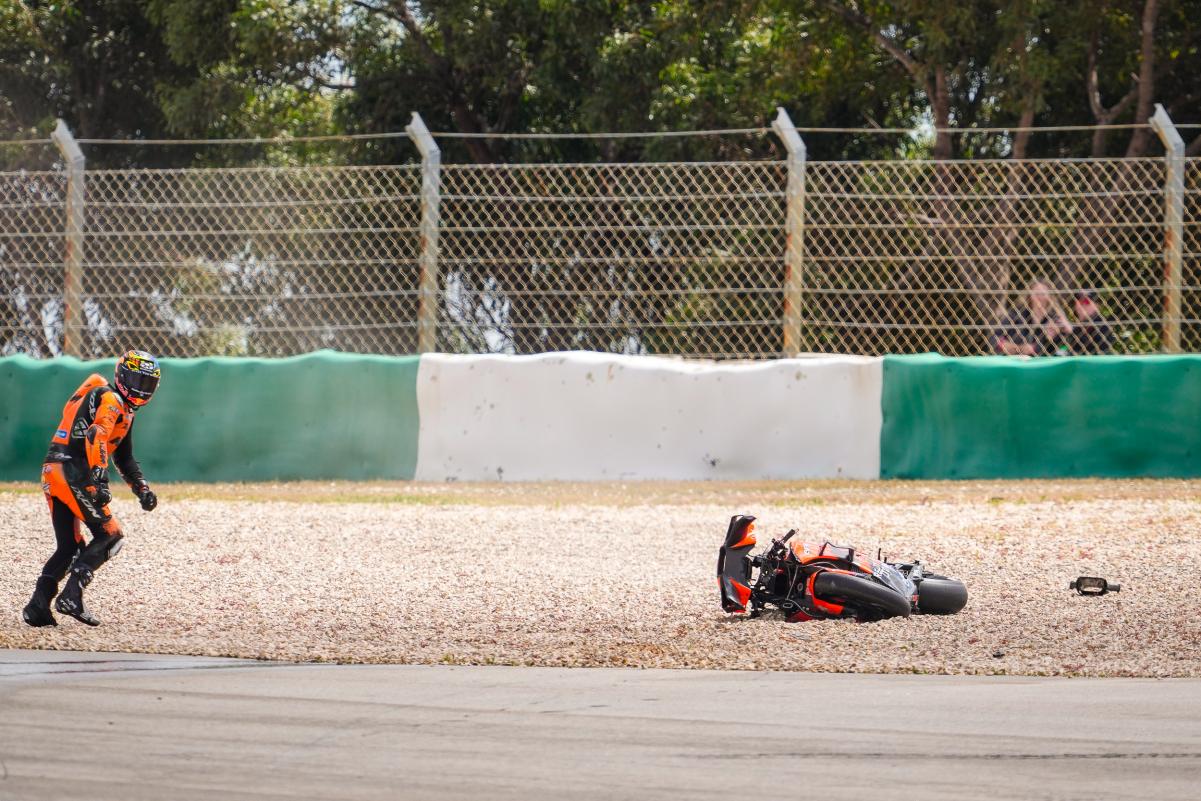 Tech3 KTM’s Remy Gardner has no regrets about starting Qualifying 1 for the Portuguese MotoGP on slick tyres despite crashing almost immediately.

Gardner earned 20th on the starting grid for tonight’s (AEST) 25-lap race at Portimao after being one of the very first to go out on slick Michelin rubber all weekend.

His qualifying time of 1:50.953s, however, came on wets during what was officially his second run in the session.

The MotoGP rookie’s first ended before he could even finish his out lap, having had a tumble when he lost the rear end of his RC16 on a wet patch at Turn 9.

Gardner had gambled on slicks as the Portimao circuit started to dry out, and while that seemed to not be the right choice initially, he stuck by the call.

“I think that we made the right decision to go out with slick tyres today even if I ended up crashing in Turn 9,” said the Sydney-born rider.

“The best way to learn about the tyres’ behaviour is to push and test the limits, and this is what I did today.

“I have had worse crashes, I will probably feel a bit sore tomorrow morning [Sunday afternoon AEST] when I wake up, but I am feeling okay overall.

“Tomorrow will be tough because it should be a dry day, and we have not ridden at all on the dry.

“I was looking forward to trying Portimao on a dry track, so we will see tomorrow at the warm up before the race.”

Slicks would the optimal tyre by the end of the session, as demonstrated by Alex Marquez, Luca Marini, and Jorge Martin.

They finished as the top three in the Q1 classification, all having switched from wets midway through before setting their fastest laps with the chequered flag out.

Gardner’s Tech3 KTM team-mate Raul Fernandez and Gresini Racing’s championship leader Enea Bastianini also changed from wets to slicks for their second runs, but ended up on the floor after they had done so.

They are still set to race, while the participation of the Ducati Lenovo Team’s Francesco Bagnaia needs to be approved by FIM medics after his heavy crash.

Bagnaia was straight back into the pits after heading out initially on wets in Q1, but highsided onto his shoulder when he caught a wet patch on the run to Turn 3 on his first flyer.

Bastianini qualified 18th, Fernandez 24th, and Bastianini 25th, the latter having not set a time.