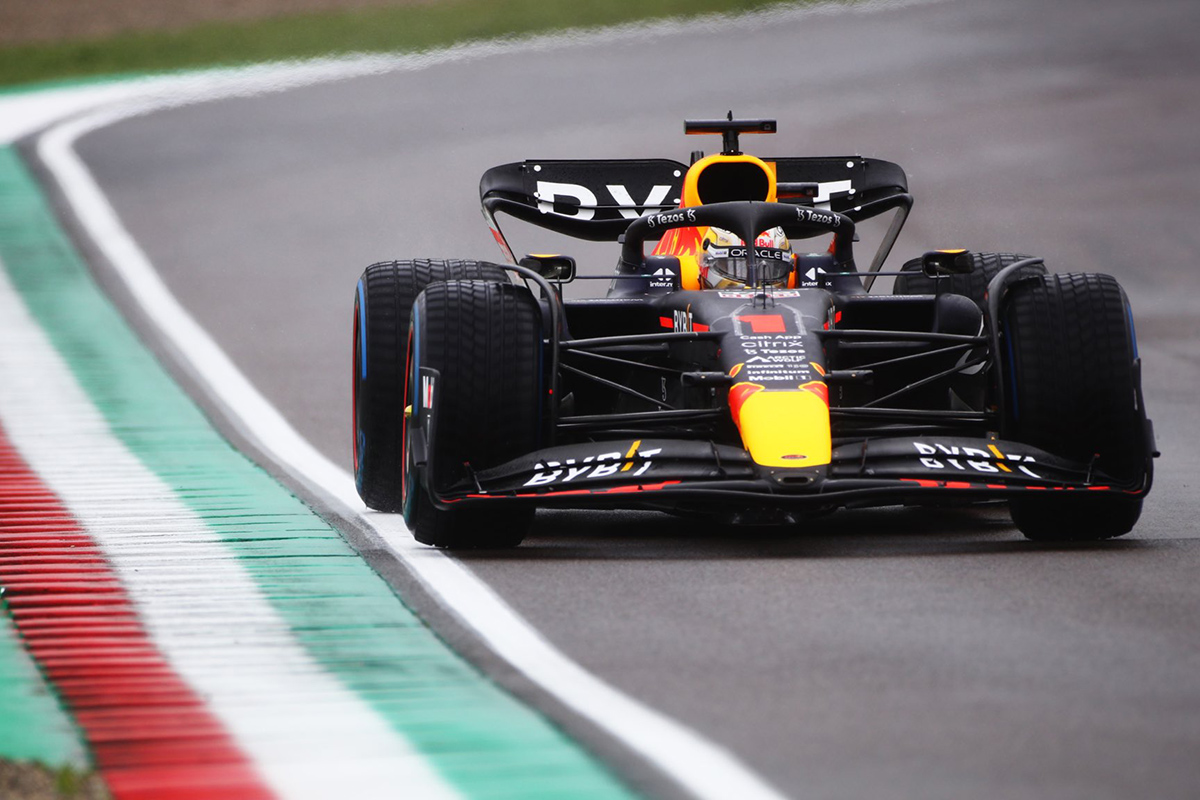 Lando Norris, who triggered the final red flag, will start third while Carlos Sainz spun out in Qualifying 2, but will still start 10th courtesy or worsening weather.

A damp track with drying line greeted drivers as qualifying began, though many still initially opted for intermediate tyres.

Bucking that trend were Sebastian Vettel and his Aston Martin team-mate Lance Stroll, Sauber’s Zhou Guanyu, and a smattering of others.

On intermediate tyres, Lewis Hamilton set the initial pace with a 1:27.214s, while Zhou mustered a 1:27.745s on the soft compound slicks.

Ferrari sent its pair out on the red-walled tyres, which Stroll and Vettel proved had the pace, the former recording a 1:23.419s to move onto provisional pole.

Even through he was able to get back to the pits, the car looked to have dropped a brake line before the drum explode while he limped back around, littering the circuit with debris.

Running resumed with all 19 remaining drivers immediately heading out, Esteban Ocon the first to set a time with a 1:23.240s before Vettel bested it with a 1:23.095s.

Stroll then went half a second quicker despite what looked a comparatively steady lap aboard the Aston Martin.

That was evidenced by Fernando Alonso who went 1.2s faster moments later, and Lando Norris going another 0.1s quicker still.

Times continued to tumble as track conditions improved, the pace dropping to 1:19.545s for Leclerc inside the final three minutes.

Sainz then went faster with a 1:19.305s to usurp his team-mate, Daniel Ricciardo rising to third for McLaren over Kevin Magnussen in fourth.

At the other end of the timesheets, eliminated were Albon, Ocon, Nicholas Latifi, Pierre Gasly, and Yuki Tsunoda.

It was a frenetic finale, with Hamilton and Russell both narrowly avoided an early exit, the former finished the segment in 15th, just 0.004s quicker than Tsunoda.

Rain was predicted to start falling shortly after Qualifying 2 commenced, which saw a race to get out on track from all 15 drivers left in the session.

To a man they had the soft compound tyres fitted, Sainz recording a 1:18.990s out of the gate to claim provisional pole.

Sainz triggered the second red flag of qualifying as he found himself off the road at Rivazza with just under 11 minutes remaining.

He sat second at the time, only to lose the rear as he turned into the final corner, impacting the barrier with the left side of the car.

By the time the session resumed, the predicted rain had arrived, dousing the circuit and consigning all drivers to their fates.

As a result, nobody headed out when proceedings got going once more, the clock ticking down to a silent racetrack.

That was broken by Vettel, who headed out on intermediate tyres if only to gain a sighter lap in damp conditions ahead of Qualifying 3.

A handful of others followed suit, Leclerc, Perez, Alonso, and Bottas, though none improved on their earlier efforts.

Both Mercedes were therefore eliminated, Russell in 11th ahead Schumacher, Hamilton, Zhou Guanyu, and Stroll.

It marked the first time since the 2012 Japanese Grand Prix that neither Mercedes had progressed into the final phase of the session, a 187-race streak.

Intermediates were the order of the day when Q3 began, all nine remaining runners heading out immediately as the session commenced.

A spin from Magnussen drew another red flag when he Haas driver left the road at Acque Minerali, keeping the car out of the fence and able to recover to the pits.

Nobody had set a time to that point, the session resuming with 8:51 remaining.

Unsurprisingly it was a busy restart once the green flag was shown, Magnussen among those heading out.

Ricciardo went fastest with his first complete lap in Q3, a 1:29.742s, but was quickly shuffled down the order as Verstappen and Leclerc both went faster.

Verstappen then improved to move into provisional pole moments before the red flag was shown, with just 2:58 left on the clock.

The stoppage was the result of Bottas on the exit of Variante Alta, the Finn climbing out of the car after he pulled off the road on the run out of the chicane.

The field headed down the lane some 90 seconds before pit exit opened, Verstappen at the head of the queue and unwilling to cede that spot to Leclerc as they headed back out on track.

Conditions had worsened slightly under the Bottas red flag, with running never really getting going before Norris left the road at Acque Minerale to trigger the fifth interruption of the session.

With just 38 seconds left on the clock, the session was not restarted.

It means the history books will record Max Verstappen as the pole position sitter this weekend, regardless of the outcome of Sprint Qualifying on Saturday.

He’ll line up with Leclerc in second from Norris in third, then Magnussen fourth from Alonso, Ricciardo, Perez, Bottas, Vettel, and Sainz, who never took part in Q3.