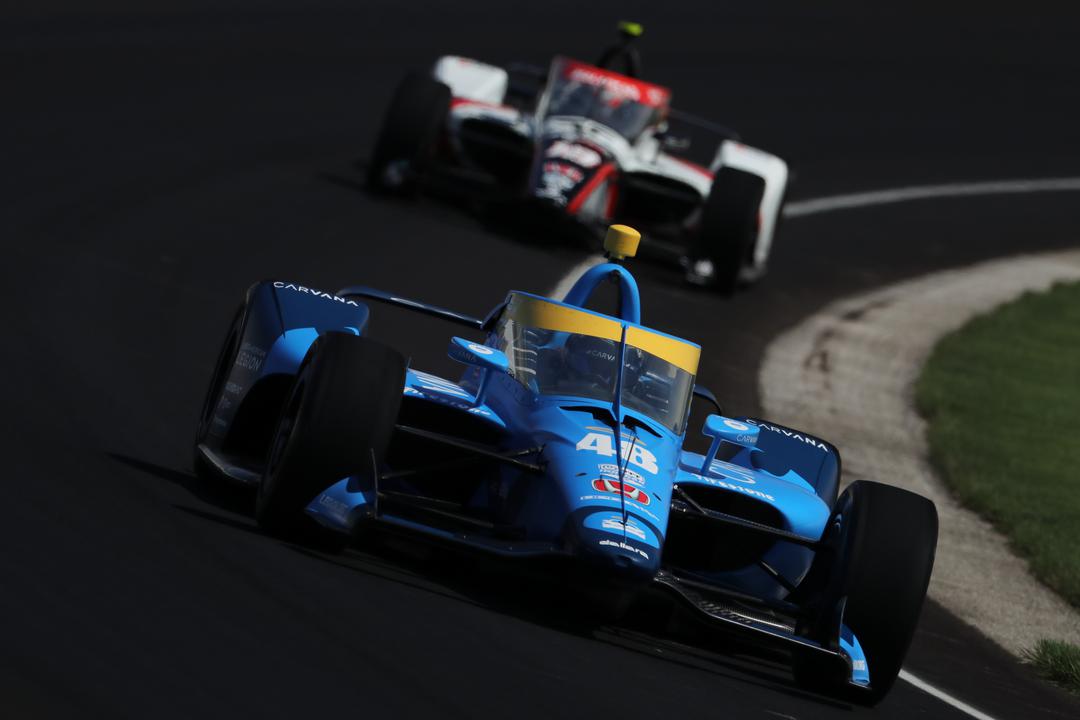 Jimmie Johnson says he is “still flinching” when he tips an IndyCar into Turns 1 and 3 of Indianapolis Motor Speedway.

Johnson will make his debut in the 500 next month although it will be far from his first appearance at the circuit, having won NASCAR’s Brickyard 400 on four occasions.

The seven-time Cup Series champion got another two days’ worth of open-wheeler experience at Indianapolis in this week’s Open Test, in the #48 Chip Ganassi Racing Honda.

He ended up eighth-fastest with a best average lap speed of 227.900mph (366.769km/h), but admits he is still not completely at ease driving an IndyCar at the Brickyard.

Asked what it was like trying to get used to not lifting into the first corner, Johnson responded, “I’m still flinching in Turn 1 and Turn 3.

“It’s just a longarse straightaway to talk to yourself and convince yourself to hold it wide open through 1 and 3.

“Ironically, [Turns] 2 and 4 behave very much the same, regardless of the NASCAR vehicle or the IndyCar vehicle.”

All five CGR cars finished the test in the top 10, Tony Kanaan leading the way in third ahead of his 500-only campaign, Scott Dixon fourth, Alex Palou seventh, and Marcus Ericsson 10th.

Johnson obviously took that as a positive, but said he was more focused on figuring out how to pass.

“I think our cars do have a lot of speed,” he said.

“For myself, it was really just trying to understand how to get that gap and pull up to the group in front of you, pop off a lap.

“Looks nice on the scoreboard, but there were a few cars that could really pass.

“I think that’s what we’re all deep down inside focused on, and going to debrief and work on, is to figure out how to get off of turns two and four and make better passes.”

Elaborating on that, he explained, “Turns 2 and 4 are still the key to passing regardless of series.

“So, I’m surprised how similar and how challenging 2 and 4 can be to set up a pass.

“Guys made mistakes in front of me, I was able to get them. I have some more to do to figure out passing.”

The 46-year-old also reported that he was able to drive without the splint which was made after he suffered a broken hand in a practice crash at Long Beach earlier this month.

Practice for the Indy 500 starts on May 17 (local time), while competition resumes at Barber Motorsports Park next week.

That race, and all others in the IndyCar Series, will be streamed live and ad-free on Stan Sport.