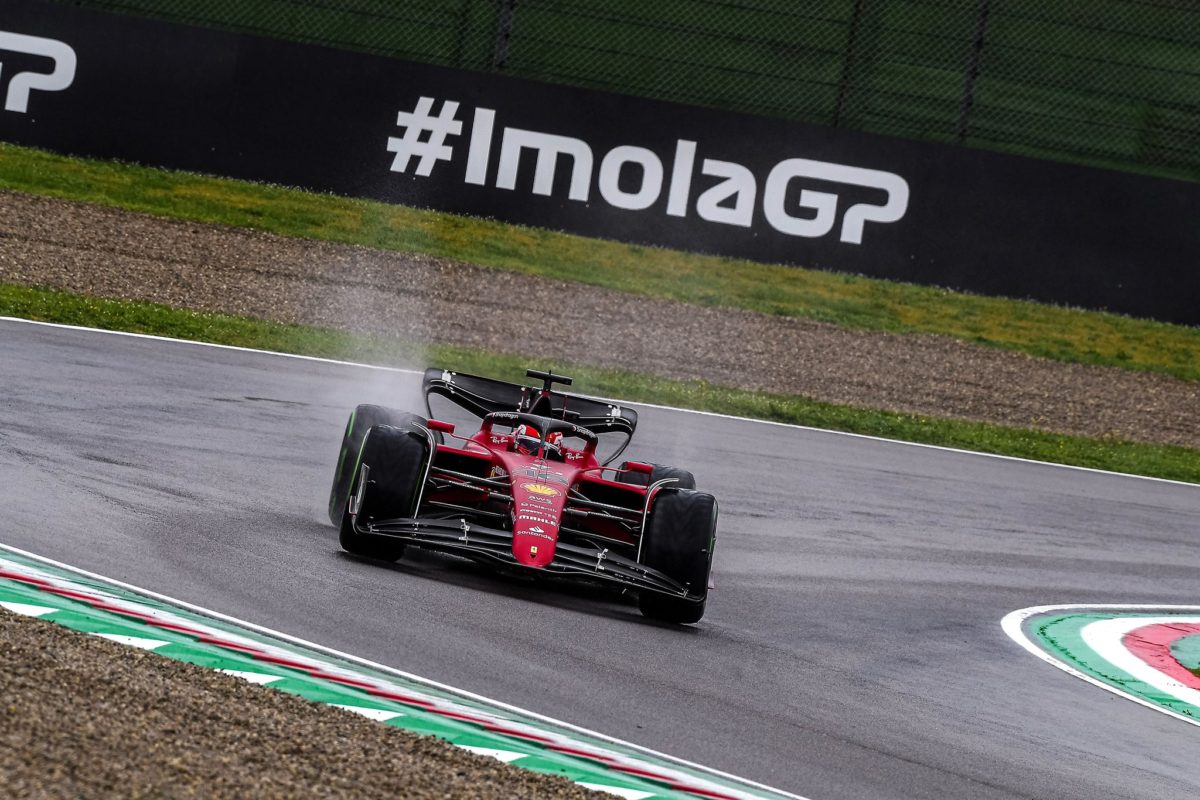 World championship leader Leclerc was the faster of the two Ferrari drivers, almost 0.9s clear of his team-mate and near 1.5s clear of Max Verstappen.

Haas enjoyed a strong session with Kevin Magnussen and Mick Schumacher fourth and fifth, while Mercedes’ battle with porpoising continues.

Wet conditions saw a slow start to the opening practice session, the only track running prior to Qualifying and cars entering parc ferme.

Valtteri Bottas was the first to brave the conditions, which saw pools of standing water off the racing line, especially at the top of the hill.

After some eight minutes, the track became rather busier, with just over half the field heading out.

The slippery conditions were highlighted by Leclerc, who spun on his out lap from the pits at Variante Alta.

He wasn’t alone, Nicholas Latifi running into the gravel at Tosa soon afterwards, while Magunssen went off at Acque Minerali moments prior.

Over the radio, Latifi reported the car was going into anti-stall, the Canadian touring back to the pits.

Alex Albon, in the other Williams, ran over the grass at Variante Alta as he locked both front wheels, battling for tyre temperature.

Between the almost persistent yellow flags, Verstappen logged a 1:39.595s to go fastest, quickly pipped by Leclerc on a 1:39.235s.

The chicane at the top of the hill proved a hot spot for offs, with Lewis Hamilton, Schumacher, Lando Norris, and Verstappen also skating off at various points.

Norris found himself off the road at Rivazza moments after Leclerc surged back to the top of the timesheets, the championship leader logging a 1:36.629s.

The McLaren driver was 10th fastest to that point, his best a 1:38.128s, more than two seconds quicker than team-mate Daniel Ricciardo.

Leclerc had another moment, this time exiting Acque Minerali, before gathering up the Ferrari and continuing.

His lose came shortly after Sainz suggested conditions were not too far from the cross over onto intermediate tyres.

Halfway through the session, Perez emerged fastest with a 1:35.476s, still using a set of wets.

Sebastian Vettel and Lance Stroll were the first to make the switch, the former rising to fifth fastest on a 1:36.537s with his first timed lap on the green-walled rubber.

The German improved on his second lap, rising to fourth fastest on a 1:36.131s.

Norris followed the two Aston Martins onto the intermediate rubber, those the only three to make until the 40-minute mark in the session.

At that point, a raft of others made the switch, including Sainz, Leclerc, Magnussen, Schumacher, and Ricciardo.

Inside the final 15 minutes, Ferrari looked in a strong position as Sainz logged a best of 1:30.803s while Leclerc was second fastest with a 1:32.056s.

Third best was Verstappen, though 1.3s away from the outright pace with Magnussen fourth ahead of Vettel in fifth.

The session as briefly interrupted when Norris found the gravel at Acque Minerali, the Brit able to extract the McLaren without assistance but not before the red flag was quickly thrown.

It was a short stoppage and running soon resumed, all runners opting for the intermediate tyres.

The busy end to the session saw the chequered flag fall with Valtteri Bottas in the fence at Acque Minerali, the Alfa Romeo Sauber looking to have lightly nosed the tyre wall.

Then was Verstappen, 1.4s down on the lead Ferrari, and the Haas pairing of Magnussen and Schumacher.

Cars are next on track for Qualifying later today, which sets the grid for Sprint Qualifying tomorrow, beginning at 01:00 AEST on Saturday morning.