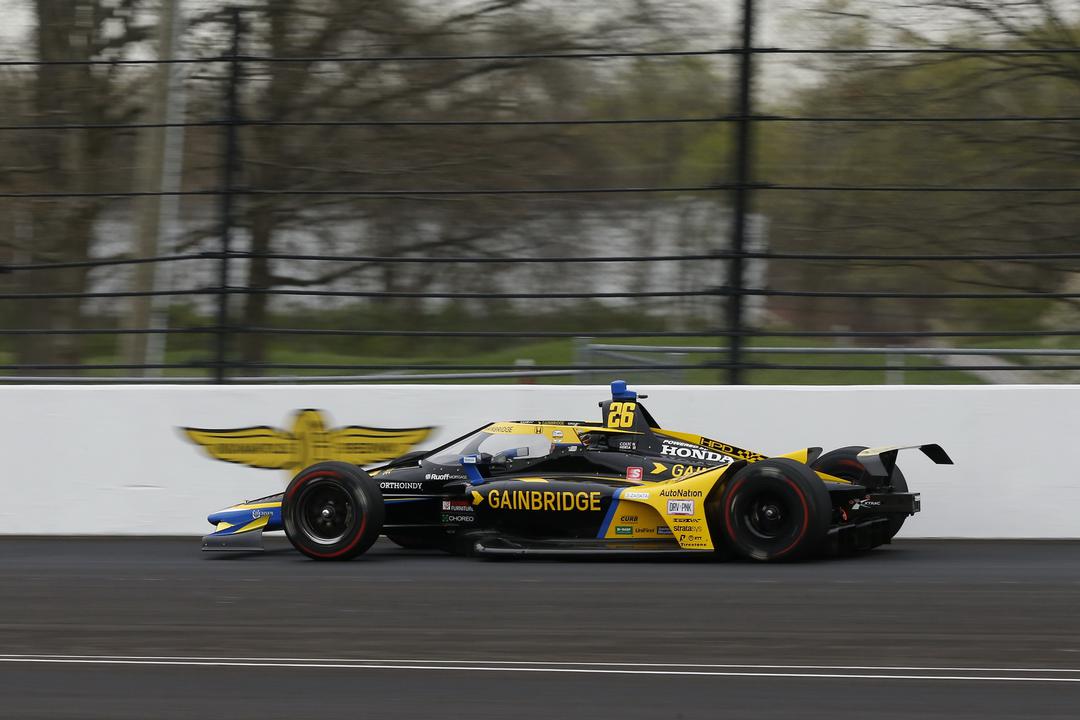 Colton Herta has his expressed his relief at incurring minimal damage when he crashed while avoiding a spinning Will Power in the Indianapolis 500 test.

The #12 Team Penske entry had swapped ends on its way out of pit lane at the Brickyard and came to rest on the edge of the race line at Turn 1.

Herta deviated to the right to avoid clouting Power in an incident which “scared the absolute daylights” out of the latter, but then lost control himself.

However, the most of the damage to the #26 Andretti Autosport car was incurred when the attenuator scraped the outside wall as it spun.

“I tell you, I feel a lot better, because I was so mad when that happened, because we got caught up in somebody else’s mistake and then I thought it just ruined our race car,” said the 22-year-old.

“So, I’m glad that… it’s still not great, we still have some damage, but it’s a lot better than what I thought it was going to be when I got out of the car.”

On the incident, Herta recounted, “I wasn’t really sure what exactly happened at the time.

“You know, I saw Will, I wasn’t sure how far up the race track he was, but I knew I had to go a little wide and, unfortunately, just not really any grip out there, and car got loose, but happy that it wasn’t terrible.

“I got out of the car, I was pretty mad when I crashed because I thought I just ruined my great race car that they made for me for the month.

“It looks like the attenuator took the bulk of the damage, and maybe a little bit on the left-rear but the underwing’s fine and a lot of the aero bits that you kind of want to stay in shape are good, so I’m happy about that, [and] happy that Will’s fine.

“It could have been a lot worse if he slid up the track just a little bit more.

“I was close to having nowhere to go and luckily, we kind of got away with that one a little bit.”

The Californian’s manoeuvre to miss Power was not the only near-miss in that incident.

Marcus Ericsson did well to avoid Car #26 as it slid down the track between Turns 1 and 2, a point noted by Herta.

“I’m pretty sure we were both looking at each other in the eyes,” he remarked.

“Because, he was going left and right, he wasn’t sure, and my brakes weren’t quite locked up yet, so I wasn’t really clear which direction I was going.

“Then I locked them up, and luckily, he’s a heads-up driver and got out of the way.”

Power was the third driver to loop their car exiting the pits during the day, the others being fellow Indy 500 winners Alexander Rossi and Helio Castroneves.

Rossi got away with his spin, but Castroneves found the wall, with Meyer Shank Racing advising he will take no part in the second and final day of the test.

IndyCar ultimately called off proceedings early, due to question marks about the surface.

Castroneves’ comments backed up those concerns, the Brazilian saying, “I didn’t feel anything strange, anything bottoming, I wasn’t pushing, and the rear just spun out.

“I was trying to control it, making sure I didn’t crash, and it was a very odd situation.

“Unfortunately, we couldn’t avoid that. It was very unusual.”