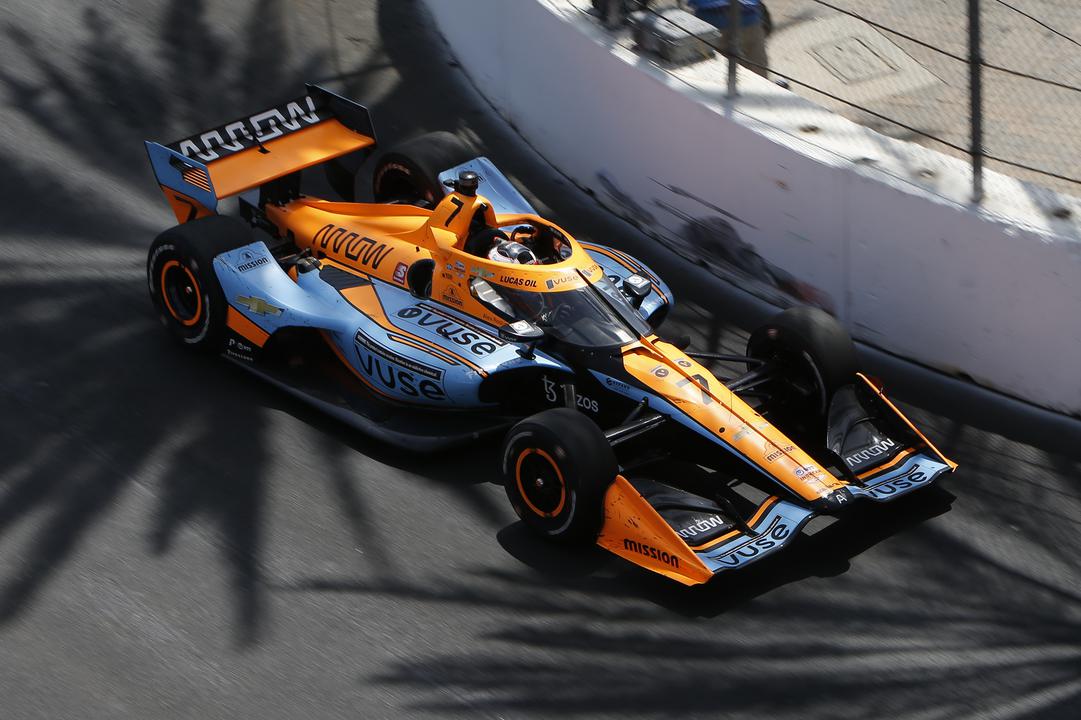 McLaren SP’s two IndyCar drivers have given quite contrasting assessments of where they sit in the title race after their performances at Long Beach.

Pato O’Ward jumped from 13th to fifth on the points table in the third event of the season, after a similar climb from 11th on the grid to fifth at the chequered flag.

Felix Rosenqvist, too, improved his position in the series standings, but only to 17th from a ranking of 19th at the conclusion of the Texas event.

Ironically, only Rosenqvist got a McLaren SP Chevrolet into the Fast Six at Long Beach, but slipped from a second row start to a finish of 11th.

The Swede had contact with Alexander Rossi as the Andretti Autosport driver made a pass for fourth at the start of Lap 21, which preceded a slump to 11th before his first stop.

However, heavy tyre wear turned out to be the drama, and something he says that the team “really need[s] to solve”.

Commented Rosenqvist about his race, “After a horrible first stint, with a lot of tyre degradation, I had no rubber left on the tyres.

“It’s a familiar thing at this point with the last event being the same deal. That’s something we really need to solve.

“I’m not sure if it is driving-related, setup-related or maybe a little bit of both. It’s something we have to fix, because we can’t afford to miss opportunities like [this] where we had a potential top five result in the bag.

“It all started slipping away and we were trying to survive out there with massive degradation.

“It’s a shame to come home 11th, but there are some positives to take away. We had good speed and we were excited and ready to go.

“We all want to capitalise on a good finish, and right now that would be good for all of us.”

O’Ward went in the opposite direction in the 85-lapper, gradually picking his way through many of the front-runners.

It was a big improvement after finishing 12th from 16th on the grid in St Petersburg, and 15th after a penalty for knocking over a wheel man in Texas.

Beyond the raw statistics, the Mexican, whose future was the subject of a swirl of speculation in recent weeks, was pleased about what the team learnt on Sunday in Long Beach.

“After the first two races of the season, I’ll take finishing fifth,” he said.

“It is a good solid foundation to build on for the rest of the year. We can work from here.

“We learned some good things through warm-up and the race that should help us when we come back and when we go to another street course.

“I think this is a very solid start to our charge for a championship. I know it’s the third race, but this is what we needed.

“Barber is next and I love that place.”

“Overall, it was a solid day for Arrow McLaren SP, especially given how chaotic the weekend was on track,” said Kiel.

“Pato did a great job of letting the race come to him and slowly working his way toward the front.

“He drove a smart race, avoided some incidents in front of him and finished fifth.

“Felix started fourth and was keeping pace with the leaders but unfortunately his tyres started to fall off sooner than we would have liked during the first stints.

“He dropped quite a few places but was eventually able to make his way up and finish 11th.

“I can’t say enough about how strong both Arrow McLaren SP crews were; the pit stops were flawless.

“I’m proud of the hard work that everybody put in all week and hopefully this is a turning point as we head to Barber in a few weeks.”

After an open test at Indianapolis on April 20-21, competition resumes at Barber Motorsports Park on April 29-May 1 (both dates in local time).