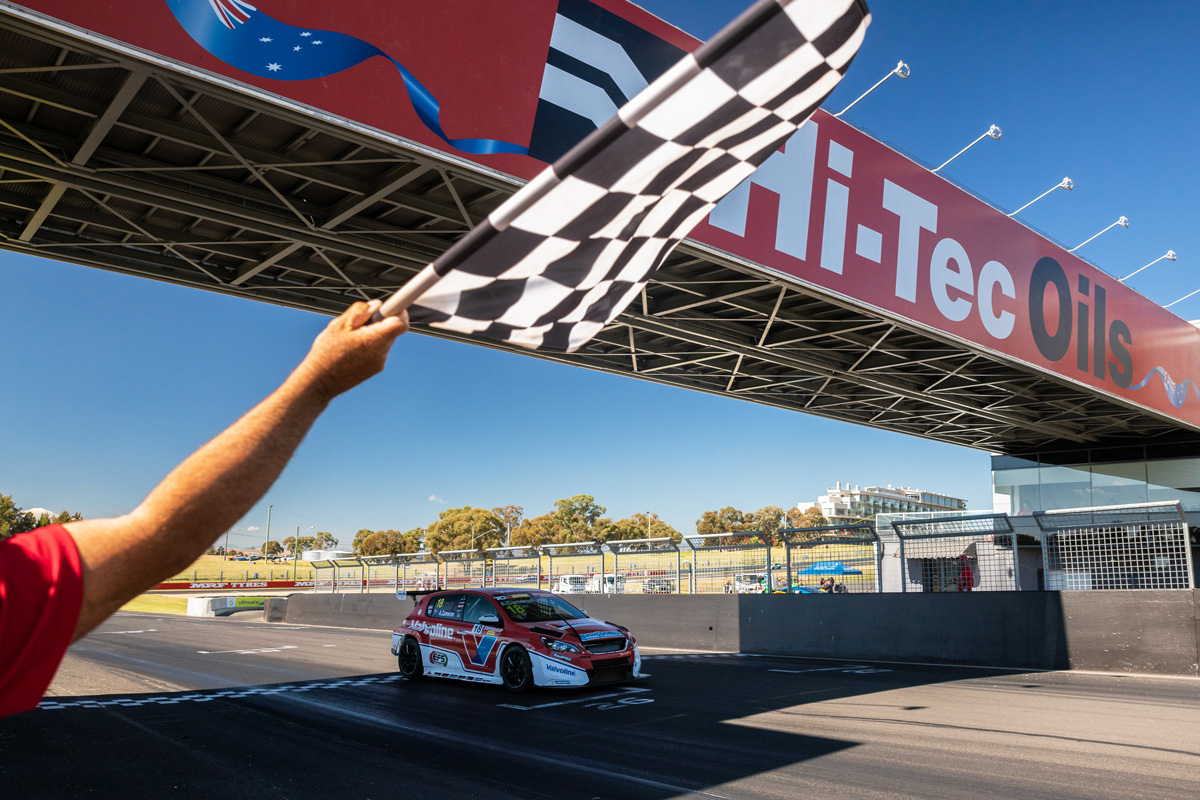 Aaron Cameron has hauled himself back into the Supercheap Auto TCR Australia title fight with a second race win in as many days at Mount Panorama.

With one DNF in each of the first two rounds at Symmons Plains and Phillip Island, Cameron arrived at Bathurst positioned 13th in the series.

He is now up in fourth, and just 54 points adrift of leader Tony D’Alberto.

Cameron pipped team-mate Jordan Cox for pole yesterday with the fastest ever TCR lap around The Mountain, and converted that into victory in Race 1.

An eventful second encounter left him ninth, but he bounced back to comfortably win Race 3.

The #18 Peugeot driver got the jump on Garry Rogers Motorsport stablemate James Moffat to lead into Hell Corner and streak off into the distance.

By the end of Lap 1, Cameron enjoyed a 3.5s buffer over the Moffat-led train of cars, and his advantage was 5.4s after another 6.213km.

Moffat came under pressure from Dylan O’Keeffe at that point, but maintained position by virtue of a criss-cross manoeuvre out of Murray’s Corner.

While Cameron ran his own race, Bailey Sweeny showed more of the pace that got him the Race 2 win, making his way into second by Lap 5 with a pass on Moffat at The Chase.

By the time Moffat reached Griffins Bend, he was pulling off a spectacular save after getting sideways having run side-by-side with O’Keeffe, replays inconclusive as to whether contact was made.

That shuffled the #34 Renault back to seventh, although he would recover to fifth by the end.

That effort would be aided by a five-second penalty hanging over Will Brown’s head for a bump-and-run on Josh Buchan at Murray’s Corner, and Ben Bargwanna running wide in successive corners at Murray’s and Hell.

When the order shook out, it was Cameron, Sweeny, O’Keeffe, Buchan, Moffat, Bargwanna and Brown in seventh.

Brad Shiels beat D’Alberto to eighth, with Jordan Cox rounding out the 10 having again had to start from last.

Tim Slade came home just 19th, having been spun at Murray’s, while Kody Garland was the only driver off the lead lap having hit the wall at Griffins early in the piece.

In the overall standings, D’Alberto now is 28 points clear of O’Keeffe, with Brown third, Cameron fourth and Bargwanna fifth.

Round 4 of the TCR Australia season takes place at Sydney Motorsport Park across May 27-29, with Stan Sport providing exclusive coverage.

UPDATE: A number of penalties have been applied post-race, specifically 30 seconds for each of Car #2 (Luke King) and Car #14 (Lachlan Mineeff), and 10 seconds for Car #8 (Dylan O’Keeffe). Josh Buchan has subsequently been promoted to third.

Also as a result, Will Brown has moved into second overall (37 points behind Tony D’Alberto) ahead of O’Keeffe, and Ben Bargwanna has risen to fourth ahead of Aaron Cameron.