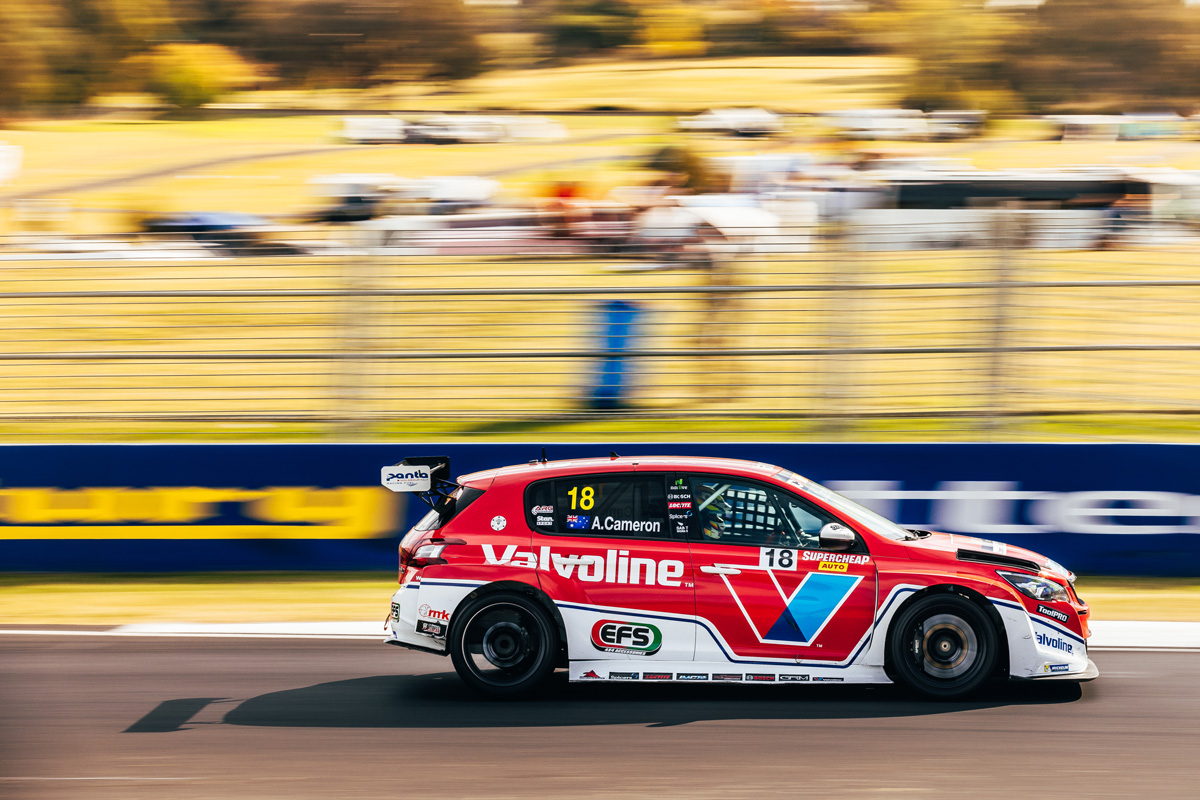 The Garry Rogers Motorsport team-mates threatened to run away with the show during Friday practice and did just that when one-lap pace mattered come qualifying.

Cameron smoked the field in the first segment of qualifying with a 2:13.2069s and immediately set his sights on a 2:12s in the subsequent battle for pole.

Cox was in fact the first driver in TCR history to log a lap of Mount Panorama under the 2:13s barrier, posting a 2:12.7868s on his second flying lap in Qualifying 2.

That had him on provisional pole, although both he and Cameron would begin rattling off more purple sector times on their next tour.

Cameron would improve to a 2:12.7676s while Cox behind would fall less than half a tenth short, and neither would go better on their fourth and final effort.

Behind the top two, the Peugeot dominance continued, the French marque locking out the first four spots with Ben Bargwanna and Dylan O’Keeffe to share the second row.

Tim Slade (Wall Racing Honda) starred on debut to be best of the rest in fifth, outqualifying series-leading team-mate Tony D’Alberto (seventh) in the process.

Wedged between that pair was the Renault of James Moffat, while Will Brown was eighth and Bailey Sweeny ninth – the latter having to abandon his Q2 run early due to front splitter damage.

In Q1, it was Cameron who turned the tables on Friday pacesetter Cox to gap the field by more than seven tenths.

Further back, Josh Buchan and Brad Shiels were the unlucky drivers to miss out on proceeding to Q2, where the top 10 would duke it out for pole.

The latter was knocked out when Sweeny improved late to take fourth in the opening session, while O’Keeffe left it even later to propel himself into Q2 at Buchan’s expense.

Shiels voiced his frustration at Sweeny and O’Keeffe potentially going faster despite the presence of local yellows.

Those were triggered by Michael Caruso, who did make it through but would take no further part in qualifying after clipping the wall on the way down The Mountain, meaning he will start 10th.

The presence of the #10 Ashley Seward Motorsport Alfa Romeo on-track did leave a number of drivers to lament missing the cut.

Among the biggest omissions was title contender Zac Soutar, whose practice mileage was limited by a gearshift issue, while Jay Hanson will start Race 1 from 15th in the spare Melbourne Performance Centre Audi following his practice crash yesterday.

Lachlan Mineeff flirted with the run-off at Hell Corner en route to 18th, one spot ahead of series returnee Luke King.

The opening Supercheap Auto TCR Australia race of the weekend is scheduled to start at 14:45 AEST.